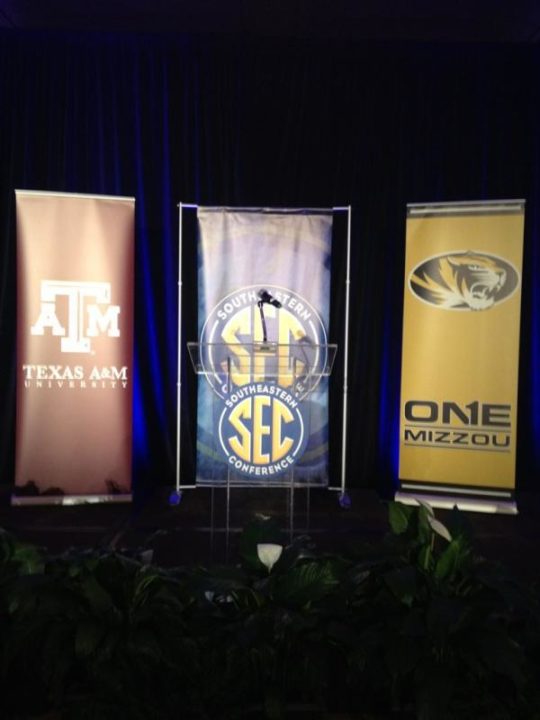 The Aggies and the Tigers can now do business as a current member of the South Eastern Conference (Photo Courtesy: Texas A&M University)

As of midnight today, July 1st, 2012, Texas A&M University and the University of Missouri have become members of the South Eastern Conference, more commonly referred to as the “SEC”.

The conference championship meet that will ensue should be nothing short of a blood-bath next year, especially on the women’s side where 5 out of the top 10 teams from last year’s NCAA Championship meet will now reside in a single conference. In fact, for the ladies the top 10 will be evenly split between just two conferences: the SEC and the Pac-12.

Here’s the real kicker – the new superconference will have 20 swimming programs (9 men and 11 women) and all but three of them (the South Carolina men, the Kentucky women, and the Vanderbilt women) scored points at last year’s NCAA Championship meet. Vanderbilt is the only team that has gone more than two-straight NCAA Championship meets without scoring. That’s depth that’s unparalleled by any conference in the country, including the Pac-12.

The big change for the teams coming over from the Big 12 will be at the conference level. For starters, they won’t be able to guarantee incoming freshmen spots at the conference championship meet – the diminutive Big 12 allowed for exhibition swims, but the SEC doesn’t. There will also be the 5-day conference meet, which we described earlier. They will also swim many, many more in-conference dual meets than they’re used to, which could disrupt some long-standing series’ with other, more local teams (and greatly increase their travel time).

Here’s a quick primer on the two men’s and two women’s programs who will be joining the conference:

Texas A&M Women – Led by Steve Bultman, with two American Olympians (and 12 current or former swimmers & divers headed to the Olympics altogether from the men’s and women’s programs), these Aggies and their coach are the hottest college program this side of Berkeley right now. Juniors Breeja Larson and Cammile Adams both won events at the 2012 U.S. Olympic Trials in the 100 breaststroke and 200 fly, respectively. Caroline McElhany was in both the 100 and 200 fly finals at that same meet.

And even deeper than that – this program is rising fast on the backs of a high school class from 2010 that is the best in the country, and will be juniors next year. They had two medley relays at last year’s NCAA Championships that were 5th and 4th, and every member of those relays were only sophomores. Even better, they will get two more swimmers from that class back who were out with injuries last year but have been spectacular since their returns: Texas A&M’s (and Mexico’s) top sprinter Lili Ibanez; as well as Sarah Henry, who was 6th at the 2011 NCAA Championships in the 400 IM, and came back from ACL surgery to place 7th in the same event at the Olympic Trials.

They have a good base of American swimmers, but aren’t afraid to go outside of the country (especially to our neighbors to the north and south) to grab top recruits. Many of their international Olympians grew up in Texas, but compete internationally through parental lineages.

Bultman’s program is a very routine-based program (we’ll elaborate more on that in a separate post). They have become phenomenal at developing swimmers in the strokes, middle-distances, and IM’s (they had four swimmers in the B-Final of the 200 last year. They have also become a center of breaststroking – bringing in two top-10 breaststroke recruits in next year’s freshman class. They’ve struggled with their sprinters as of late – after the graduation of 100 NCAA Champion Julia Wilkinson and walk-on-turned-All-American Maria Sommer, they have had a hole in their lineup there – the only hole that’s really keeping them out of the top 5 teams in the country. If Ibanez is healthy, that could change next year.

The A&M women also have a great diving program – though they graduated their two NCAA scorers, including National Champion Jaele Patrick, from last year. The Aggies will contend for a top-two spot in the conference next season.

Texas A&M Men – The Texas A&M men are a vastly different program than the women. They are coached by Jay Holmes, who has a quarter-of-a-century at the helm of the program, with the first 18 as an assistant and the last 7 as head coach.

This is a very sprint-based program, and they train and race just as what they are. Almost across-the-board, they are better in the 50 than the 100, better in the 100 than the 200, and they use that speed focus to consistently put up elite relay performances at the NCAA Championships that keep them constantly in the country’s top-15.

This program’s goal has been for years to crack the top-10, and they’re right on the verge. The challenge is that they graduated two of their best in Big 12 Champions Boris Loncaric and Amini Fonua. Fonua was also one of the leaders of the team last year, which can’t be underrated on a program that has athletes from so many parts of the world that all have to gel and be cohesive.

The A&M men always stalk around and pounce late in the recruiting season, so we really don’t have a good feel for what they’ll replace those guys with, but they did bring in a Texas state backstroking champion Jacob Wallace in the spring class – a huge and badly-needed piece.

Next year, the men will again rely on sprinters, including Canadian Kyle Troskot who has been waiting for an explosion, and John Dalton who scored B-Finals in both the 50 and 100 free at NCAA’s. Dalton could be a name we hear more about in contention for the World University Games team.

Missouri Women & Women (combined program) – In Greg Rhodenbaugh’s few short years in Missouri after leaving Frank Busch’s staff at Arizona, he has turned the program around.

That process was accelerated on the women’s side last year by drawing a transfer from Florida’s top sprinter Shara Stafford, who was 5th in the 50 free and 6th in the 100 free. But she was a one-and-done for the Tigers, and they will have to look to carry that momentum further. Between Dominique Bouchard and Cassie Cunningham, their backstroke group is clearly a strength.

They will bring in a great recruiting class headed by a 49-freestyler Anna Patterson and backstroker Madison Bridges, another big-time backstroker. As Rhodenbaugh continues to build the talent pool to the level that he worked with at Arizona, it will be interesting to see if he adjusts more toward the Frank Busch strategy if a big mid-season taper, and then swimming through the conference championship meet.

The men’s swimming program is probably a few years behind the women developmentally, but they have a great diving foundation with their lone NCAA swimming qualifier Eegan Groome having a great future in the distance races. He placed as high as 24th in his first season in the mile. They will also return junior David Bonuchi, who alone scored 49 NCAA points last season and put the Tigers into the top 20.

Groome next year will get a new training partner in Daniel Graviss, another Houston native, who has already been a 15:29 in the 1650 freestyle. Men’s programs often take longer to turn around than womens’ do.

Check out the full list of teams that will be left in each of the conferences,