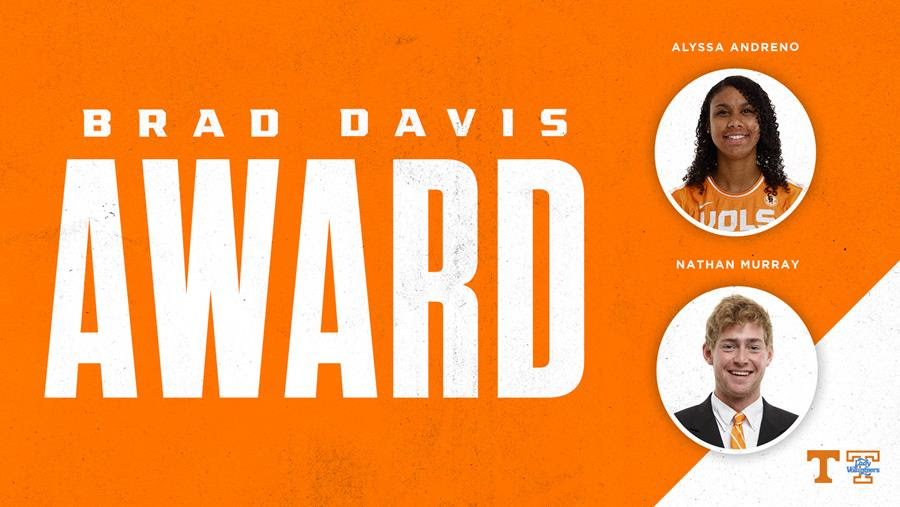 The SEC announced each of its 14 member institutions' award winners Thursday, with Murray, along with volleyball's Alyssa Andreno, winning from Tennessee. Current photo via Tennessee Athletics

The SEC Community Service Post-Graduate Scholarship is named for former Associate Commissioner Brad Davis. Davis succumbed to cancer on March 2, 2006. He had been a member of the SEC staff since 1988, first serving as an assistant commissioner until 1994 when he was promoted to associate commissioner.

As winners of the award, Andreno and Murray will receive a $5,000 post-graduate scholarship provided by the SEC.

Being Tennessee’s school award winners, both Andreno and Murray are nominees for the Male and Female Brad Davis Community Service Leaders of the Year award. The leaders of the year award will be announced next week, with each leader receiving a $10,000 post-graduate scholarship from the SEC.

Since 2017, Andreno has totaled 128.5 hours of community service. A few of her service projects include, helping with the Gatlinburg fire relief effort, working with Read Across America and visiting patients at the East Tennessee Children’s Hospital and UT Medical Center.

“I am honored to receive this award,” Andreno said. “Serving others has always been extremely important to me and being recognized for giving back to my community is one of the highest honors I could ever hope to receive.”

During his time on Rocky Top, Murray accumulated over 100 hours of community service. His service includes, volunteering with KARM (Knoxville Area Rescue Mission), helping at the Young Williams Animal Shelter and working with the Emerald Youth Foundation.

Both Andreno and Murray were members of the 2017-18 VOLeaders class and traveled with the cohort to Ecuador in the summer of 2018. The VOLeaders trip was a 10-day cultural exchange that provided leadership opportunities focused on community development, social change and inclusion through sport.

“It goes without saying that service done for others is not something we do for credit, award or acclaim” Murray said. “It is something we do as Vols as we uphold the Torch Bearer’s Creed: One that beareth a torch shadoweth oneself to give light to others. I am honored to receive this scholarship given that service and leadership are two of the most important values upheld by Tennessee Athletics. The Brad Davis scholarship will help me further my education and better serve my community.”