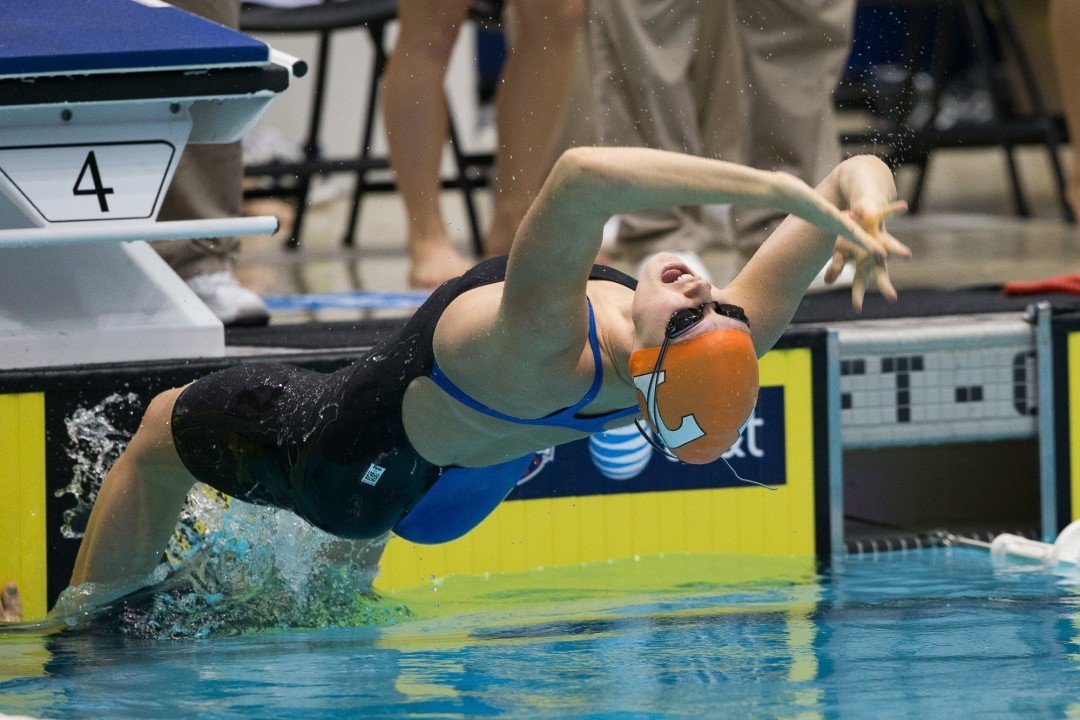 Christina Leander, a 2014 NCAA Qualifier for Tennessee, will transfer to Miami in the fall. Archive photo via Tim Binning/TheSwimPictures.com

The Miami Hurricanes have announced a sizable class of 8 incoming swimmers & divers for their women’s team, along with one diver for their diving-only men’s team, who will begin competition this fall.

The highlight of the class is Christina Leander, who ended her freshman season at the University of Tennessee in 2014 at the NCAA Championships, where she placed 30th in the 100 yard backstroke (with a season best of 53.06).

Leander was unable to repeat her invite in the 2014-2015 season, topping out at 53.94 in her best event, and will transfer with two remaining years of eligibility.

She doesn’t have a huge range outside of the 100 back, but her 200 back best is 1:58.19 and her 100 fly best is 54.67. The latter was done as a high school swimmer, and she didn’t swim the race at all as a sophomore, and both of those times will be serviceable in dual meets and at the ACC Championships.

Even if she turns out to be just a sprint backstroker for the Hurricanes though, they desperately need one. They had just one swimmer go better than 56 seconds in the 100 yard back last season, and that was Heather Arseth (54.40) who has since graduated.

It’s also likely that Leander will get a shot at some freestyle relays, where she wasn’t often needed for the Volunteers. She’s been 24.4 in the 50 and 52.3 in the 100 yard freestyles, but both swims were from her junior year of high school.

The full release of Miami’s incoming freshman class is below:

The group is comprised of nine freshmen and one junior transfer immediately eligible to compete.

“This is a very dynamic class that will add to us in a lot of different ways,” Kershaw said. “They’ll increase our program’s level of talent and our level of depth, which will be two key factors in moving us forward.”

“We had some great talent to replace when last year’s seniors graduated, and I feel like we went out and found great people to help fill those spots,” Kershaw said. “In general we also needed to bolster our overall numbers, but we have been very conscious of doing that with the right people.

“Beyond the pool, in terms of academics, mindset, attitude, personalities – all of those things – the class is going to add a lot to our returning group.”

Ableman said his new trio of divers is reminiscent in talent of his most recent group of graduates, including 2015 national champion Sam Dorman and All-Americans Cheyenne Cousineau and Thea Vock.

“What I see is a lot of potential – the same thing I saw with Sam and Thea and Cheyenne when they were young,” Ableman said. “They’re going to have to work hard. We have a great system in place for that, and I’m confident if they stay healthy, they’re going to have similar type of success. I’m really looking forward to the process, even though the great results may not come for a couple of years.”

·         Kershaw on Leander: “Christina is a great one. I’ve spent a lot of time getting to know her, and I think she’s going to be great for our program and a great fit with our team. That’s really one of the most important considerations – determining a mindset and how someone might fit in with a team. From the performance and talent end of things, she’s got that covered and then some. She qualified for NCAA’s as a freshman at Tennessee in the 100 backstroke will be another great addition to our backstroke group. She has two years remaining, and I think she’s determined to come in and prove herself again. I’m excited to help her do that.”

·         Kershaw on Voss: “Joana will help us go from one of our weakest areas to one of our stronger areas, if not our strongest, as another new backstroker. She comes with a lot of experience in Germany, a lot of great training underneath her. She can serve the team in a lot of different ways; she’s a great backstroker and can do short distances, but she can turn around and give us a great sprint freestyle. Someone like that is going to be super valuable relay-wise…she’ll definitely be one that’s in the hunt and adding to our competition in that regard.”

·         Kershaw on Sickinger: “Katie is someone who really impressed when we met her. She had that presence about her, both personality-wise and physically. I think she’s going to be someone who will really continue to develop throughout college. I know her club coach and club team quite well, and know they’ll have her prepared well. As one of a few backstrokers in this class, Katie will help turn one of our weaknesses into a strength.”

·         Kershaw on Emery: “Madison is going to be a great addition. Distance is an area where we’ve got a star with Cameron [Davis], but we needed more depth. Madison comes in as a great swimmer with very impressive times. She’s a very hard worker and comes very highly recommended, and is going to certainly beef up our depth…if you look at her times coming in, she would have scored in the mile last year at ACC Championships. Anytime you can bring in people who have times that can score points, that’s a great thing.”

·         Kershaw on Story: “Sydney is one who has been improving greatly throughout the last year or two years. I think she’s just scratching the surface. She has a great physique, and looks like someone who will continue to get faster and get stronger. She’s very determined to do that. Anytime you talk to her, you can sense her determination and drive to get better. She comes from a very well-established team up in Atlanta, right up the road. She will be great to have.”

·         Kershaw on Dal Porto: “Sophia has a ton of energy – every time you talk to her, you can sense that from her and feed off of that. We do have a good fly group, which I think will be good for her. She can come in and learn from them, develop as they go, and use what they can teach her and flourish from there. She’s going to really strengthen that group.”

·         Ableman on Dinsmore: “I’m extremely excited. His forte is the 10-meter platform, which we haven’t had of his caliber since Kyle Prandi. Dave will be representing the US at the World Championships this summer, which means he’s one of the top two Americans at this point. He’s already accomplished quite a bit, and he has a lot of development ahead of him, as far as his springboard goes. He should be one of the best in college diving in the 10-meter as a freshman.”

·         Ableman on Chaney: “She’s someone that has a huge upside. She has not competed in about a year on anything above 1-meter, because she had shoulder surgery. She’s someone with a lot of talent that is going to take a couple of years to really develop, but once she gets a bit stronger and more seasoning, I think she’ll be one of the best divers in the country in her springboard events.”

·         Ableman on Maric: “Marcela has a lot of international experience and is a very bright woman, a very good student as well as a good diver. I had her send me some videos, and I realized I had seen her at a competition that I was at in Europe. Seeing what she could do on film and in talking to some coaches that know her, and others that worked with her, everyone agreed that she has big upside and seems real hungry to be great and hopefully to be an Olympic diver for her country. She sounds like someone that fits the bill for what we’re looking for.”

I’m confused. Miami doesn’t have a men’s swim team, but they added a male diver?

They have a men’s diving team.