Take Me Out to the Ballgame: Swimming stars Hoff and Durden throw first pitches for A’s and Rays 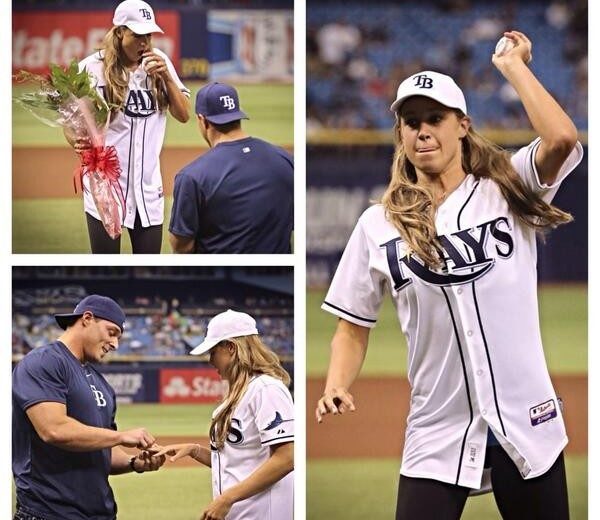 Katie Hoff threw the ceremonial first pitch at the Tampa Bay Rays game Sunday, and got a surprise from her boyfriend on the field. Meanwhile Cal coach Dave Durden is schedule to throw out the first pitch for the Oakland A's on Tuesday. Current photo via Tampa Bay Rays (@RaysBaseball) on Twitter

Well-known faces in the swimming community are making appearances on the diamond this week, with a pair of swimming celebs throwing out first pitches at Major League Baseball games.

Sunday afternoon, Olympic medalist Katie Hoff threw out the ceremonial first pitch for the Tampa Bay Rays in their game against the New York Yankees.

Hoff is slated to make the first major step of her comeback this week as she competes at the Mesa Grand Prix. But in spite of a first pitch and a big-time swim meet, Hoff will likely remember this week for something else.

After throwing out that opening pitch, Hoff was surprised by her boyfriend Todd Anderson, who was waiting for her at home plate with a pressing question. Anderson proposed to the multi-time Olympic medalist, and Hoff said yes. (You find USA Today’s coverage of the proceedings here.)

On Tuesday on the other side of the country, California Golden Bears men’s head swimming coach David Durden will warm up his arm, tossing out the opening pitch for the Oakland Athletics in their game against the Texas Rangers. Durden will represent the entire Cal men’s swimming and diving program, which won its third NCAA title in four years last month.

There’s certainly some symbolism there, given the A’s are facing Texas on Tuesday. Cal beat the Texas Longhorns for that NCAA title just as they did in 2011 and 2012, and the year before that, Texas topped the Bears for the NCAA crown. That’s prompted us at SwimSwam to ask the question of if college swimming now has its new iconic team rivalry, a possibility the Oakland Athletics certainly seem to be picking up on.

Is it just me or is he putting the ring on her wrong hand? Doesn’t the ring belong on the left hand?

It goes on the non-dominant hand.

Alright, I’m going to try to post this question one more time. I start as a coach tomorrow afternoon. Coaches, please enlighten me. Your help is greatly appreciated… “This is a little off topic, but I’m hoping someone here can give me advice… I will be coaching dry land for a group of 11-14 year olds for 30 minutes 3 days a week. Their primary focus is speed, maybe mid-distance as well. It will be outside of a gym (basketball court, parking lot), so I will be limited with weights. Maybe a few medicine balls and bands. Any ideas for exercises I can do with the group? When I trained I was used to just doing swimming, no land exercises.… Read more »

Jogging (in place or around, depending on space constraints), stretching, general calisthenics*, squats/squat jumps (with a perfect streamline at the top), sprints if you have the room (hillsprints if you have a small hill), stairs.

I’d also look into some basic plyometric exercises to mix in once you’re confident in the group being able to execute them safely/correctly. I’m a huge fan of squat jumps or anything of the sort, since that will help every single time they push off the wall.

Also, this may seem obvious, but are you the one who will be coaching them in the pool afterward as well? It sounds like it. So If you’re the one writing their workouts then it’s no problem. If not, try to coordinate the intensity with the other coach to best match their pool work for that day. i.e. know when you want them a bit fresher for the pool (maybe before a test set or something), and when you want them to swim tired. Some kids can bounce back better than others, but every once in a while there were days I would feel so sore after dryland that I think the net effect was worse because I would suck… Read more »

Thanks SVEN and CRAIGH! Good point on coordinating with the coach who will be doing the swim practices. I’ll make sure to discuss with him before hand. I’ll be sure to use these exercises you guys mentioned, and most importantly, try to make it fun for them…

how are you even qualified to coach these kids if you have no idea about how to put together a dry land program? scary!

you could even google your question and get some ideas? thought of that?

Vote Up00Vote Down Reply
THE Other Hulk

Everyone has to start somewhere. Perhaps this is a young coach getting into the sport of swimming, understands how much info can be gained from the coaches on this site and wants to use the valuable resource to pick our brain. We shouldnt be scalding, we should be helping. Its what this great sport is all about.

Very well said, The Other Hulk. ROJO’s response was not necessary but was insulting to the young coach looking for a helping hand from the more seasoned coaches/swimmers.

late to the game here, but go look for a book called
swimming anatomy.
has numerous dryland workouts you can do. one guy said focus on core, that’s helpful, a hint, forearms and toes, or planking really doesn’t do a WHOLE lot unless you’ve already blasted your core. what you have to do is not to just say ok do push ups, its to make sure they do the push ups right, correct form, elbows come back not out to the side. if they do them wrong there is no point to dry land.