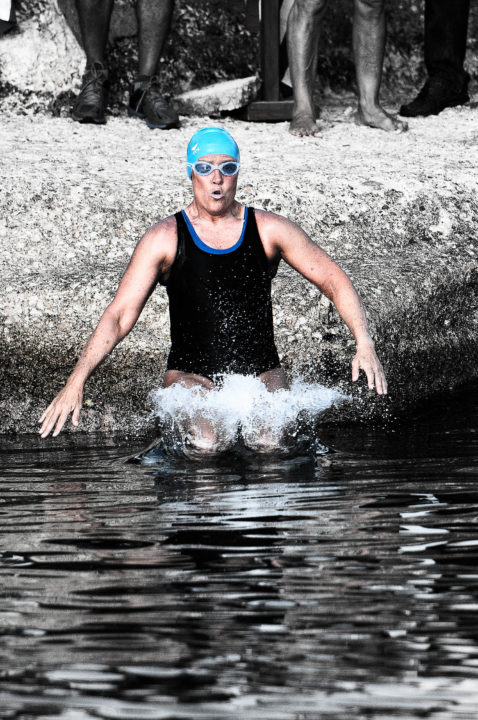 Diana Nyad's swim, whether legitimate or not, was the biggest newsmaker in swimming of 2013. Current photo via Mike Lewis/Ola Vista Photography

This particular Swammy award is not one that specifies ‘good’ or ‘bad’. Much in the mold of Time Magazine, we instead look at who was the biggest news-maker in swimming over the course of 2013, be it for something good or something bad.

To us, it was hard to ignore that Nyad’s Cuba-to-Florida swim from early September for this category. The swim took 53 hours, and caught the attention of the entire nation and entire world, and not just the swimmers.

Nyad’s swim was not un-controversial. In fact, the controversy was part of what took a monumental news story and made it even bigger. The Cuba-to-Florida journey is iconicized through people like Elian Gonzalez, who make the journey on make-shift rafts and barely survive. Nyad, meanwhile, did so while swimming under her own power, and that was perhaps too good for many to believe.

Questions arose over the validity of the equipment used during Nyad’s swim; whether or not the suit she wore counted; whether or not she was supported by doctors; whether or not the information from her tracking equipment makes sense; whether or not her observer was neutral enough; and some more recent questions about pictures on Nyad’s Facebook page about her touching a boat. The evidence and arguments on both sides are rather convincing, and whenever money’s in play, the motive exists.

It has caused some groups to try to create standard rules for swims (as, really, there’s no authority on ‘what counts’ from a Cuba-to-Florida swim). It caused CNN to run a follow-up round-table discussion on the matter. It created questions over whether or not a personal profit was to be gained, and if that was enough to cause Nyad to fudge the rules. It created rifts in swimming. It created unity in swimming. It brought new people to the sport, and inspired people to try new things.

I’ll just say one of the honorable mentions does not fit with the others.

as would be Hitler as the person of the year in early 40s?

Michael Andrew is an honorable mention?