Swimming’s TopTenTweets Of The Week: Leah Smith Is Hearing Bells 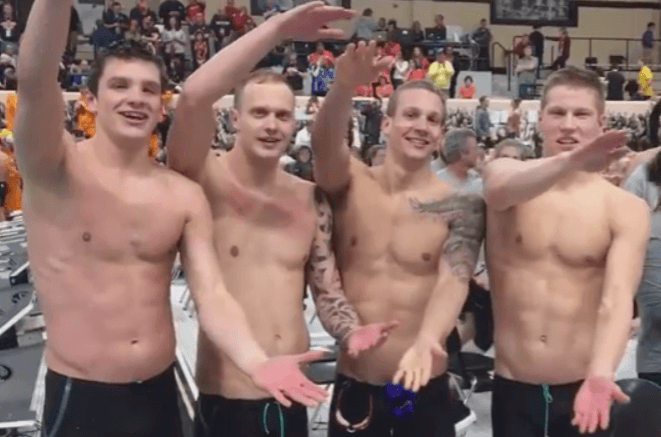 So now we know what gave James Guy the extra boost to win gold in Kazan.

What does it look like to pick up an Olympic Trial cut??? Like this!!!! Go Mary!!! #B1GCats #gunshow pic.twitter.com/WMlff2z56h

Northwestern sophomore Mary Warren (and her big guns) looks a tad excited to have booked her ticket to Omaha.

Almost as exciting as watching the championship swimming in the pool is watching the coaching staff’s reactions on the deck. In this case, it’s the Louisville’s coaches, in particular Stephanie Juncker, who can’t contain her excitement over the Cardinal women’s performances at the ACC Championship meet.

Let me introduce you the Iron Nation Anthem: https://t.co/4zGtTSRbYy
If the next video would be about you what would you show us?

The one-woman marketing machine who is Katinka Hosszu (aka, the Iron Lady) launched her own anthem and music video. Read the whole store here.

As if SwimMAC Elite and Bermudian Olympian Roy Burch’s swimming, photography and rope-climbing skills weren’t enough, the man can flagpole like nobody’s business.

University of Virginia’s Leah Smith laid waste to the NCAA Record in the women’s 1650 to take the ACC Title in an otherworldly time of 15:25.30…..and kept the bells ringing in her head the whole time.

This was after Dressel’s prelims 50 freestyle swim of 18.39. Did somebody check-in on Will Licon after Dressel topped that with his 18.23?

You know you’ve hit a whole new level when Mr. Ryan Lochte tweets the words ‘boss status’ at you!