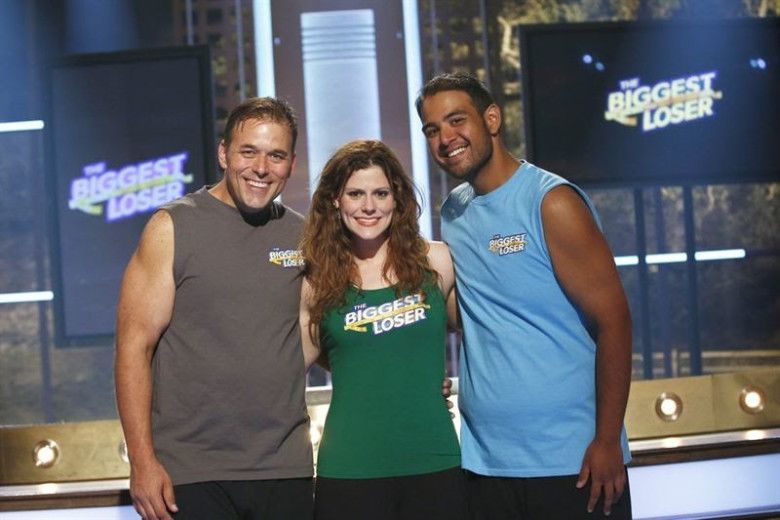 Rachel Frederickson (center) poses with her fellow finalists on the last episode of Season 15 of The Biggest Loser. Current photo via NBC

In one of the more shocking, if not surprising, transformations in Biggest Loser history, former Minnesota High School State Swimming Champion Rachel Frederickson has won the big prize on the reality show The Biggest Loser, dropping over half of her body weight.

Frederickson’s win was revealed on the season finale on Tuesday night. Frederickson began the show at 260 pounds, and in the final weigh-in topped her opponents to tip the scales at a slight 105 pounds. That earned her a cool. $250,000 check.

The 24-year old’s story is one who was one of the top junior butterfliers in the United States in high school, ranking 3rd during her junior year of high school in the 100 yard fly for 15-16’s nationally with a 53.87. She eschewed offers to a slew of major swimming programs to follow a foreign exchange student, with whom she’d fallen in love, back to Germany (it didn’t work out).

Read more about her back story here.

In the final recorded episode of the show, Frederickson came up at 150 pounds: still a monumental achievement from where she began the show. But on Tuesday’s finale, where she came back at 105 pounds, she actually broke the series record by losing 59.60% of her weight, and became the first contestant in The Biggest Loser history, globally, to end the season “underweight.”

We were able to catch up with the winner shortly before the finale aired, and while producers wouldn’t let anything be recorded (they understandably wanted the final weigh in to be a surprise).

SS: How much do you think your background as an elite athlete has helped you lose weight? Do you think it’s given you an advantage on the show?

Rachel: I think my background as an elite athlete helped me a lot on The Biggest Loser Ranch, although that part of me was buried deep inside when I first arrived. Workouts were very hard at my starting weight of 260. I was out of shape but still competitive. I wanted to prove to my trainer and myself that I could make it through a hard workout. As far as giving me an advantage, I would say definitely not at the beginning but as the weeks went on and I was feeling stronger both physically and mentally, that competitive edge helped!

SS: Do you ever look back and wonder what could have been with your swimming career?

Rachel:  I have definitely looked back and wondered over the years what college swimming would have been like. I think I could have had a fantastic swim career. I proved throughout high school swimming that I had the makings of an Olympic athlete. I was very dedicated to the sport of swimming. It was part of my life for a long time. I worked very hard to become an elite athlete. On the other hand, I also thought about how many swimmers end up pulling muscles, hurting shoulders and knees. I could have also gotten hurt and not been able to pursue my swimming.

SS: Has getting so far on The Biggest Loser helped to bring any closure to the feelings you may/may not have had about when your swimming career ended?

I am actually ok with my decision not to swim after high school. It was nice to get back in the pool at the ranch to show myself I could still rise to the challenge of a race and of course have a great swim during the triathlon! The Biggest Loser helped most at repairing my relationship with my dad who was upset with me when I decided not to swim in college. I do know I wouldn’t have found the person I am today without my past decisions, so I don’t regret them. I have found a new strength, confidence, and trust in myself.

SS: Do you have any plans to get back into competitive swimming, perhaps through a Masters program?

I will definitely continue to swim as a form of exercise. It is a great full body workout. I love being in the water – the feeling of calm and relaxation it brings. I don’t have any plans right now to get back in the competitive pool, but I have learned never to say never!

Kudos to her. And, if and when she’s ready, I would encourage her to check out a Masters meet or OW event. I think she’ll be surprised by the relaxed, fun atmosphere.

I was shocked when I saw how thin Rachel was at the finale tonight. I hope that she finds peace and happiness in her life going forward.

Vote Up00Vote Down Reply
not how BMI works

PREFACE: I have not actually seen the show and have literally no idea what she looks like… that being said..why is everyone freaking out over how her BMI puts her in the underweight category. BMI is meant as a way to look at population body changes and not specific individuals. Heck I am technically in the “overweight” category yet have a 6 pack (and can go 48 in 100 back)… The point being there is a lot more to weight..ie lean body mass.. body fat % that is a lot more relevant to the individual than simply BMI. If the average BMI of America (making these figures up) goes from 25 to 28 then we can say that some societal… Read more »

“not how BMI works” makes a good point.

An even more pragmatic stab at it in this specific instance is the fact that Rachel was only 2.5 pounds away from being in the “normal” range. Given the scenario, all of the finalists were probably dehydrated (either to weigh in lighter like a boxer, because they were on set for hours, or because they were under bright, hot stage lights), so it wouldn’t be hard to find 2.5 pounds of water weight, and then she’s normal all-of-a-sudden.