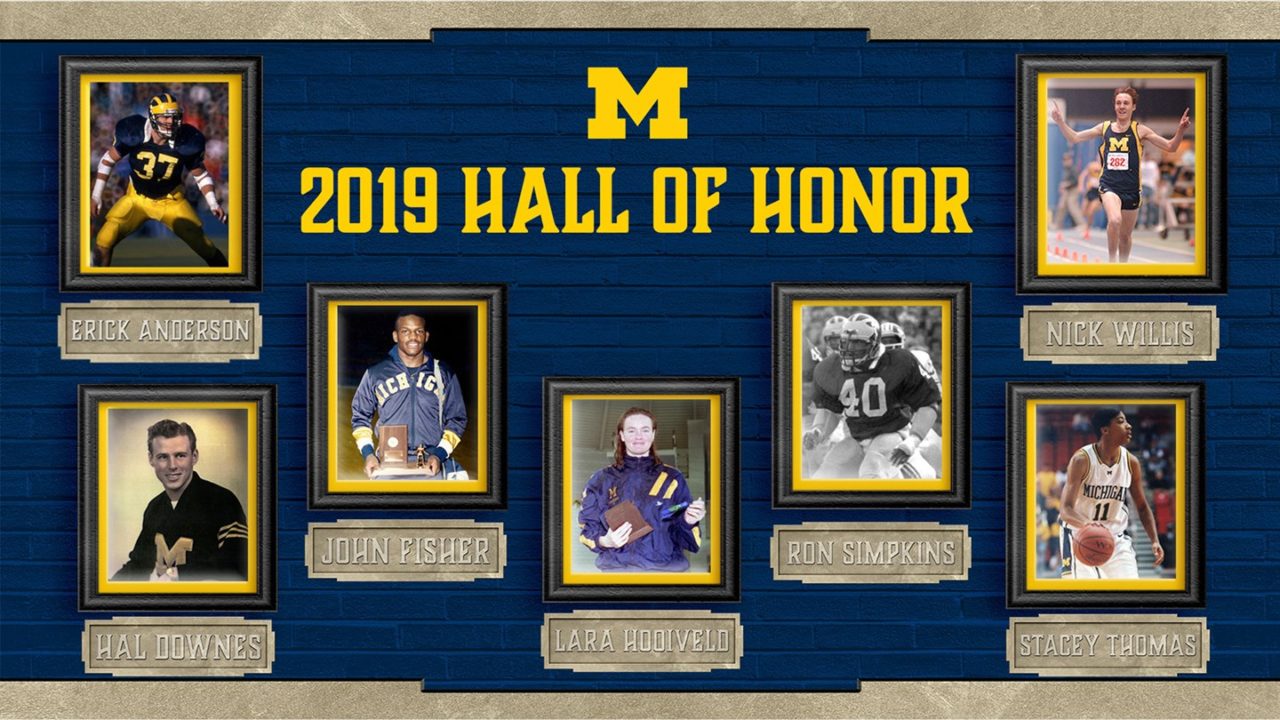 Anderson is an adaptive physical education teacher in Shaker Heights, Ohio, and works with Worthington Steel in sales. He is the co-founder of the F.I.T. (Friendship in Teams) organization, which helps provide social skills training for children with autism, Asperger’s Syndrome, ADD and other social dysfunction disorders. Anderson earned his general studies degree in 1995. He was drafted with the 186th pick overall in the seventh round of the 1992 NFL Draft by the Kansas City Chiefs and played three seasons with the Chiefs and Washington Redskins (1992-94). A 1991 All-American and team co-captain, Anderson finished his time at Michigan as the program’s third-leading tackler with 428 career stops, 25 tackles for loss, seven sacks, five interceptions and five fumble recoveries. He was a presence everywhere on the field, with at least 100 tackles in three of his four seasons. Anderson remains the only player in program history to lead the team in tackles in each of his four seasons. He was a three-time All-Big Ten Conference selection, with first-team honors in 1990 and 1991. As a senior in 1991, Anderson was named Big Ten co-Defensive Player of the Year and won the Butkus Award honoring the nation’s top linebacker. Anderson played in three Rose Bowls (1989, ’90, ’92) and one Gator Bowl (1991) in his career. His 42 starts across four years still rank second among linebackers in program history.

Downes led Michigan to an NCAA title in 1951, making 19 saves in a 7-1 victory over Brown. He earned All-America and NCAA Frozen Four all-tournament team honors during his lone season with the Wolverines. Less than a year after leading U-M to its second of nine national championships, Downes was called to serve his country in the Korean War. In 1952, Air Force Lt. Hal Downes’ B-26 Marauder went down after the plane’s engines stopped working during a bombing mission over North Korea, and he was declared MIA. All living POWs were returned to the U.S. in 1953, but Downes remained listed as MIA until his remains were returned in 2018. He will become the 22nd inductee for ice hockey.

Fisher remains among Michigan’s most decorated wrestlers, listing as one of only six four-time NCAA All-Americans (1985, ’87-89) in program history. He was a three-time Big Ten champion at 134 pounds. Boasting a career record of 183-21, he still holds the U-M school record for all-time wins, a mark that will likely remain untouched for a long time. After graduation, Fisher embarked on a long, successful international career as one of the country’s top freestyle wrestlers. He was crowned a U.S. champion in 1992, won a World Cup title five years later, and twice served as an Olympic alternate. The 15th Michigan wrestler to be inducted into the Hall of Honor, Fisher is also a member of the Michigan Chapter of the National Wrestling Hall of Fame, the Greater Flint Area Sports Hall of Fame, the Greater Flint Afro-American Hall of Fame and, as a four-time Midlands champion, the Midlands Hall of Fame. A longtime teacher within Ann Arbor Public Schools, Fisher was named a Celebration of Excellence award winner by the Ann Arbor Board of Education in 2010.

Hooiveld is the 12th member of the women’s swimming and diving program selected for the Hall of Honor. A native of Australia, Hooiveld came to Ann Arbor after representing her country at the 1988 Olympics in Seoul as a 17-year-old. At Michigan, Hooiveld morphed into one of the best swimmers in program history. She is one of only five Michigan women’s swimmers to win an NCAA title, sweeping the 100- and 200-yard breaststrokes in 1993. For her efforts, she was the NCAA Swimmer of the Year, Big Ten Female Athlete of the Year and a Honda Award nominee. Including relays, she was a five-time All-American and four-time All-America honorable mention. At the Big Ten level, Hooiveld won the 100- and 200-yard breaststrokes in both 1992 and 1993, and she contributed to four more relay wins. Her career-best time of 1:00.47 in the 100-yard breaststroke stood as a school record for 20 years. Hooiveld remains on the program’s top-10 list to this day, ranking as the seventh-best performer for that event in school history. A gold medalist at the 1990 Commonwealth Games in Auckland, New Zealand, Hooiveld co-launched a jewelry company in 2018 to inspire women to embrace their individuality.

Simpkins is a research associate at the Wayne State Center for Health and Community Impact in the College of Education, where he oversees the implementation of a variety of grant-based initiatives centered on encouraging Detroit youth to participate in sports and develop leadership skills. Simpkins earned his general studies degree in 1980. Simpkins was drafted with the 167th pick overall in the seventh round of the 1980 NFL Draft by the Cincinnati Bengals, and he played seven seasons with the Bengals and Green Bay Packers (1980, ’82-86, ’88), appearing in 91 games. After his professional playing career, Simpkins returned to Detroit and earned his master’s degree from Wayne State University in sports administration. He also coached football at Western International High School for 18 seasons from 1990-2007. Simpkins was a team captain and consensus All-American for the Wolverines in 1979, and he finished his playing career with the program-record 516 career tackles across 34 career starts. Simpkins was a tackling machine, with a single-season program-record 174 tackles in 1977, and he holds the tied-third (168 tackles, 1978) and 10th (150 tackles, 1979) highest marks on that list. He also registered the most double-digit tackle games in a single season (10, 1977) and career (25) in Michigan history. Simpkins was part of three Big Ten title-winning teams in 1976, ’77 and ’78, and he played in three Rose Bowls (1977, ’78, ’79) and one Gator Bowl (1979).

Thomas (1997-2000) put together one of the most complete careers in Michigan women’s basketball history, finishing with 1,556 points, 851 rebounds and 372 steals. She still ranks seventh in program history in scoring, fourth in rebounding and first in steals nearly 20 years after her career ended. She was a 2000 Kodak All-America honorable mention, the first in the NCAA era for the program. Thomas was the Big Ten Defensive Player of the Year and a member of the All-Big Ten team in 2000 after earning Big Ten Freshman of the Year honors in 1997. She was one of the first Wolverines drafted in the WNBA, going 23rd overall to Portland in 2000, and her six-season WNBA career included stints with the Portland Fire, Phoenix Mercury, Detroit Shock, Minnesota Lynx and Charlotte Sting. Thomas is the second women’s basketball player to be inducted into the Hall of Honor, joining Diane Dietz (1996).

Dating back to his All-America, record-breaking career at Michigan, Willis has long been one of the world’s premier middle-distance runners. The New Zealander won NCAA titles for the Wolverines in the mile (2005) and the distance medley relay (2004) among his five All-America performances on the track, in addition to two All-America honors in cross country. Willis broke collegiate records in the indoor 3,000 meters (7:44.90) and distance medley relay (9:27.77) in 2004 and in the 4xMile relay outdoors in 2005. He also owns the outdoor school record at 5,000 meters (13:27.54). His collegiate success translated directly to one of the most prolific outdoor careers in world history. He represented New Zealand at the 2004, 2008, 2012 and 2016 Olympic Games and in the six of the past seven biennial IAAF World Championships. Willis won the 1,500-meter bronze medal at the 2008 Games, which was later upgraded to a silver due to disqualifications, and he claimed the bronze medal at the 2016 edition of the Games. With a career best of 3:29.66 at 1,500 meters, he is the 26th-fastest man in the history of the world in that event. He has broken four minutes in the mile more than 50 times between the track and the road, doing so in 17 consecutive years, including 2019. He graduated from U-M with a degree in economics and was inducted into the Michigan Men’s Track and Field Hall of Fame in 2015. He will become the 24th inductee from the men’s track and field program.

The U-M Athletics Hall of Honor was established in 1978 to recognize individuals who have made significant contributions as athletes, coaches and administrators to the tradition of Wolverine athletics and, in doing so, have enhanced the image and reputation of the University of Michigan.