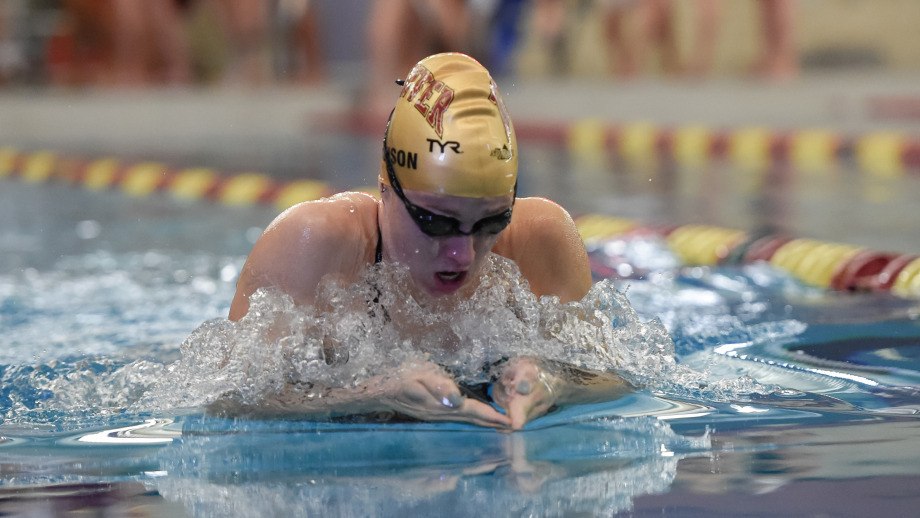 The Summit League announced the 2018 Swimming and Diving Athletes of the Year Wednesday, as voted by the league’s head coaches. Current photo via Denverpioneers.com

The Summit League announced the 2018 Swimming and Diving Athletes of the Year Wednesday, as voted by the league’s head coaches. Denver’s Anton Loncar and Bailey Andison earned their third-consecutive Swimmer of the Year honors, while South Dakota’s Isaac Morris and Omaha’s Monica Houck claimed the first Diver of the Year awards for their respective programs.

Loncar collected the Men’s Swimmer of the Year crown for the third-straight year. The senior guided the Pioneers to their first relay All-America honor, breaking a school and league record by claiming 14th in the 200 free relay (1:17.22) at the NCAA Championships. Loncar picked up additional All-America accolades when he touched seventh in the 100 back (45.20) and sixth in the 200 back (1:39.15), smashing school and league records in the process. A six-time individual event champion at The Summit League Championships, he holds the all-time league record in the 100 (45.11) and 200 back (1:38.62). This year, he stood atop the league in the 100 back, 200 back, 200 free relay and 400 medley relay. Loncar is only the second men’s swimmer in league history to earn the honor three times, and is the lone to claim them consecutively.

Andison continues the dominance for Denver, earning the Women’s Swimmer of the Year honor also for the third-straight year. The junior snagged two All-America titles by reaching the wall eighth in the 200 IM (1:55.22) and ninth in the 400 IM (4:03.83) at the NCAA Championships. The six-time All-American became the first Pioneer swimmer to earn All-America honors in three different seasons. Andison claims six individual event titles from her history at The Summit League Championships. This year, she took the crown in the 200 IM, touching in 1:58.09. Andison holds the all-time league record in the 100, 200 and 400 IM, as well as the 800 free, 200 medley and 400 medley relays. Andison is the second swimmer to claim the Women’s Swimmer of the Year award on three consecutive occasions.

Morris is the first Coyote to secure the Men’s Diver of the Year crown. The sophomore swept the boards at the league championships, winning the 1-meter with a score of 316.50 and the 3-meter with 340.60. For his efforts, Morris was dubbed the Diving Championship MVP. At his second-straight appearance in the Zone Diving Championships, he placed 30th on the 3-meter (257.25) and 26th on the 1-meter (273.60). Morris etched his name in the record book by collecting six Diver of the Week awards, good for second-most in a single season in league history. He holds the top mark for the season on the 3-meter (357.68) and the third-best score on the 1-meter (317.25).

Houck also makes history for her program, becoming the first Maverick to earn the Women’s Diver of the Year title. She claimed her first berth to the Zone Diving Championships and placed the highest out of all league divers, earning 34th on the 3-meter (255.35). The senior collected all-league honors at the league championships on the 1-meter with a 238.30 score. Additionally, she finished fourth at the championships on the 3-meter (248.50). For the year, Houck secured the third-best 3-meter score (284.55) and the sixth-best 1-meter score (255.52).

ABOUT THE SUMMIT LEAGUE
Through 35 years of Division I athletics, The Summit League offers 19 championship sports and has a combined enrollment of nearly 100,000 at eight institutions, including three located in top 60 U.S. metro populations and two land-grant universities. Member institutions include: Denver (University of Denver), Fort Wayne (Indiana University-Purdue University-Fort Wayne), North Dakota State University, Omaha (University of Nebraska Omaha), Oral Roberts University, the University of South Dakota, South Dakota State University and Western Illinois University with the University of North Dakota becoming an official member on July 1, 2018. Previously known as the Mid-Continent Conference, The Summit League rebranded in 2007 and has since produced nine NCAA Champions along with over 90 Academic All-Americans, nearly 100 All-America selections and numerous former student-athletes competing at the highest professional level. For more information about the league, visit www.thesummitleague.org website, follow The Summit League on Twitter @thesummitleague.