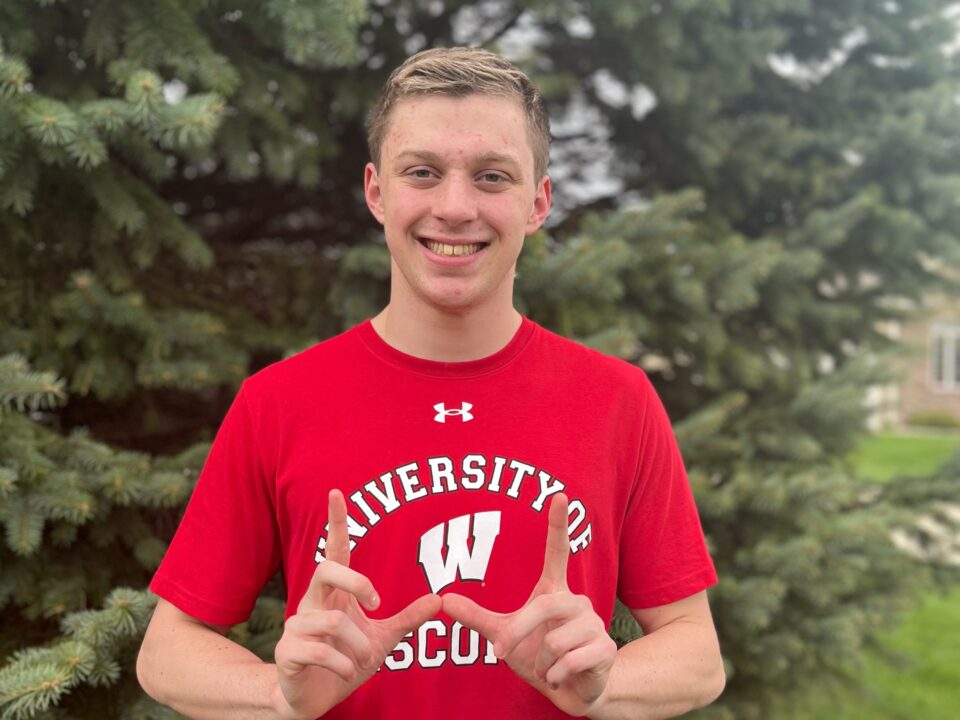 Verona Area Swim Team's Jack Madoch has a Summer Juniors time in the 50 free and his current high school is less than 7 miles away from his future campus. Current photo via Jack Madoch

Wisconsin native Jack Madoch of Verona Area Swim Team has decided to stay in-state and verbally commit to the University of Wisconsin-Madison for the fall of 2023.

“I’m beyond excited to announce my verbal commitment to swim at The University of Wisconsin for the class of 2023. Thank you to all my coaches, teammates and family who have helped me along this path.”

Madoch is entering his senior year at Middleton High School which is less than seven miles away from his future campus. He placed 2nd in the 50 free at the 2022 Wisconsin Interscholastic Athletic Association (WIAA) Boys Division 1 State Championship in February with a time of 20.42. The first time he broke the 21.00 barrier was at the Division 1 Verona Sectionals one week earlier with a time of 20.46, his first Summer Juniors cut. At the State Championships, Madoch also placed 2nd in the 100 free with a time of 45.48. He was about one-third of a second off his best time. a Winter Juniors qualifying time, which he also swam at the Verona Sectionals in February.

Since the State Championships, Madoch lowered his lifetime best 50 free time by .12 by posting a time of 20.34 at the Wisconsin LSC 13&O Championships in March. There, he also swam a lifetime best time in the 200 free with a Futures cut of 1:41.04 to place 2nd.

Madoch would have been the closest to making it back to the finals at the 2022 Big Ten Conference Championships in the 200 free where his fastest time would have placed 27th, missing the ‘C’ final by three spots. His best times also would have placed him 35th in both the 50 and 100 free.

The Badgers have a sturdy 200 free training group led by rising junior Jake Newmark who placed 3rd in the finals at last season’s championship meet. They also had two ‘B’ finalists and two ‘C’ finalists. Rising junior Isaac Casey-Hrenak was their highest finisher in the 50 free in 23rd place while rising sophomore Nico Butera was their fastest 100 freestyler in 20th place.

Wisconsin men are coming off a 4th place finish at the 2022 Big Ten Conference Championships under head coach Yuri Suguiyama.

They also have Andrew benson coming back from injury 19.2-42

This kid is legit.