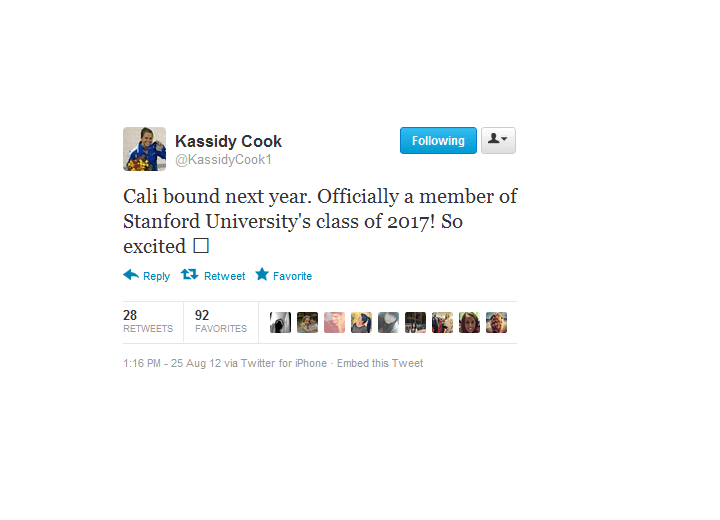 The Stanford women’s swim team is still without a coach (either head or assistant) as the beginning of their school...

The Stanford women’s swim team is still without a coach (either head or assistant) as the beginning of their school year draws near and recruiting trips are booking up, but head diving coach Rick Schavone is doing his best to pick up the slack. He has secured a commitment from Kassidy Cook out of the Woodlands Diving Academy in Houston, one of the country’s premier diving programs.

She revealed on Twitter today her decision to head to Stanford, calling it “official”.

Cook’s best event is the 1-meter, where she was the 2010 National Champion, but without an Olympic competition in that event, she focuses on the 3-meter internationally. In Federal Way in June, at the Olympic Diving Trials, Cook, placed 2nd on the synchronized 3-meter with partner Christina Loukas by less than half-a-point (.42, to be precise). That is about as close as a diving competition can get.

She also took 4th on the 3-meter individually.

The Stanford diving program is a hot ticket these days, especially after freshman Kristian Ipsen on the men’s squad made the US Olympic Team.

While Cook brings huge potential on the springboards (as in, NCAA Championship potential as a freshman), she hasn’t dived the platform since 2009. That limits her value ever-so-slightly for the Cardinal, but she’s one of the rare divers who is good enough on the springboards to still likely outscore most of the country’s top divers.