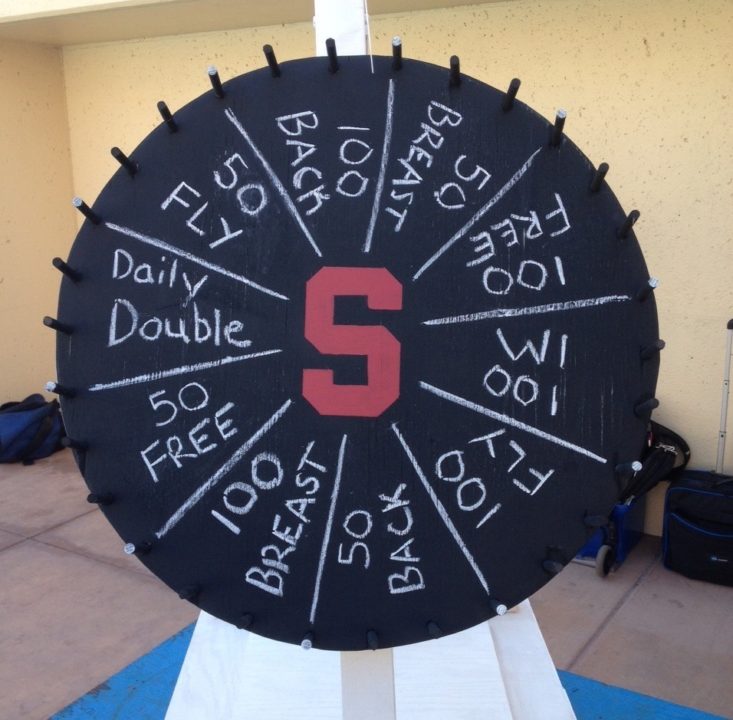 The Stanford and UC Santa Cruz men opened the year in a different fashion, swimming an exhibition meet where the event to be swum was decided immediately before the first event by "spinning the wheel". (Photo Credit: Scott Armstrong)

The Stanford and UC Santa Cruz men’s teams swam a different kind of dual meet to open up their seasons.  Rather than dragging themselves through a full-length meet, the two teams split into heats, and spun the wheel (shown above) to determine what the heat would swim immediately prior to the race.  The unorthodox format, which consisted of 32 races and was completed in under an hour, made for a fun Friday afternoon at the Avery Aquatic Center.

“Mission accomplished,” Stanford’s Goldman Director of Men’s Swimming Ted Knapp said of the opening meet in an official press release on GoStanford.com. “This was one great hour of quality swimming, with some people racing their best event, an off event, or an event they haven’t swum since high school.

“There was the aspect of adversity in not knowing which events were going to be swum. Everyone had to get into – and stay in – that racing mentality. The spirit on the deck was great from heat to heat.”

Stanford’s freshman class had a big day, as well.  Top recruit Connor Black won each of his four heats, highlighted by his 48.89 100 fly, the fastest overall time of the day.  He also won his heat of the 50 breast, 100 breast, and 100 IM.  Fellow freshmen Daniel Le, Spencer DeShon, Travis Johns, Justin Buck, and Max Williamson all won their first events of their Stanford careers.

The Cardinal truly kick their season off next weekend (October 12th) with a dual meet again a high-quality Indiana team, featuring All-Americans Eric Ress, Cody Miller, Steven Schmuhl, and James Wells.  While both teams will be in the midst of some heavy training, expect some quality head-to-head matchups between the two squads.

Just about every team in the country would be hard pressed to beat some of Stanford’s guys, but UC Santa Cruz, a Division III school, managed top three finishes in three heats from Casey Colella (100 breast), James Lamb (50 back), and Brian Walthour (50 breast).