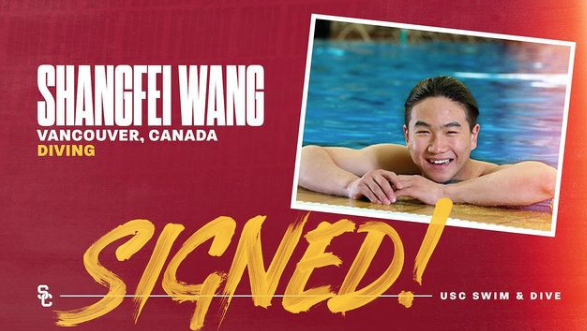 The 19-year-old originally hails from China, but has been competing in Canada for the last two years. Archive photo via @uscswim / Instagram

Li comes to Illinois with 40 years of experience coaching diving. Most recently, Li was the head diving coach at Miami University.

Jenna Walch, a diver from Anchorage, Alaska, has signed an NLI with University of Nevada, Las Vegas and will begin in the fall of 2021.

Diver Shangfei Wang has committed to the University of Southern California beginning in the 2021-22 NCAA season, the Trojans announced on Instagram in late November.

A post shared by USC Swimming and Diving (@uscswim)

A native of China, Wang moved to Calgary, Alberta in 2018 when he was 17, with the ultimate goal of becoming a Canadian citizen and representing the country in the Olympic Games.

After spending time with Dive Calgary and coach Charlie Tu, Wang has most recently competed for iDive, based out of Vancouver. In February 2020, he swept the 1-meter and 3-meter events at the BC Winter Provincial Championships in Surrey.

Now 19, Wang is also a bronze medalist in the 3-meter at the Chinese Youth National Games, and also owns a silver in the same event from the Australian National Championships.

Wang, who has gone by the nickname “Sean” since arriving in Canada, posted scores of 375.60 and 425.20 in the 1-meter and 3-meter events, respectively, at those BC Provincials, which are both iDive Open Club Records. That 3-meter score would’ve placed him second at the 2020 Pac-12 Championships, while his 1-meter showing would rank fourth.

USC currently only has two male divers on its roster, both of whom will return next season. Sophomore Georgii Korovin, a Russian native, was the runner-up at Pac-12s on Platform in his first year, while Tatsuya Machida is in his freshman season.