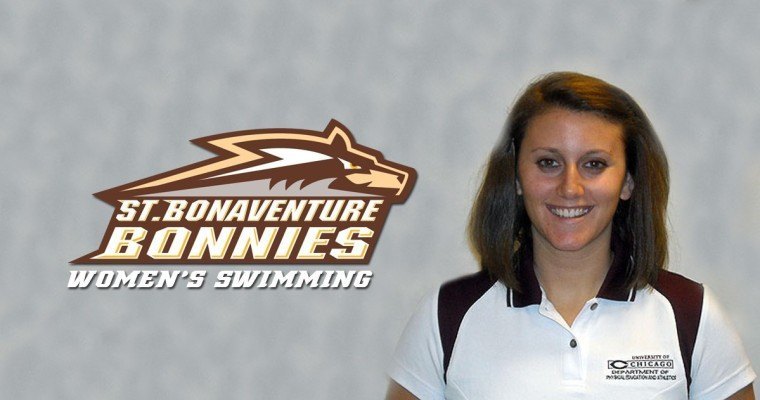 St. Bonaventure has named former team captain Krista Carlson as the new head coach of their women’s program. She replaces outgoing head coach Seth Johnson, another St. Bonaventure alumni, who was the head coach for the last 5 seasons. Johnson was recently named the Director of Athletics Marketing and Promotions at St. Bonaventure.

Carlson makes her return to Division I after three seasons spent as the men’s and women’s assistant at NCAA Division III power University of Chicago – where both genders’ programs finished in the top 10 at each of the last two NCAA Championship meets. That include 2014 freshman NCAA Division III Champion in the 200 fly Abby Erdmann.

Prior to her time at Chicago, Carlson spent three years as an assistant coach and aquatics director at Radford University, another Division I Mid-Major program.

The Bonnies are hoping that Carlson’s return to the program could improve its fortune in the water. The team finished 9th out of 10 teams at the 2014 A-10 Championships, despite their independently coached men’s team winning the conference title.

Turning the women’s program around won’t be a quick-fix, especially after graduating the program’s top sprinter Jeanette Dietrich. The team does, however, have some talented divers (including sophomore Meghan Bartlett) and a solid core of swimmers like sophomore Tanja Kirmse, who was 3rd in the conference in the 200 free (1:50.59) and 500 free (4:53.15) last season.