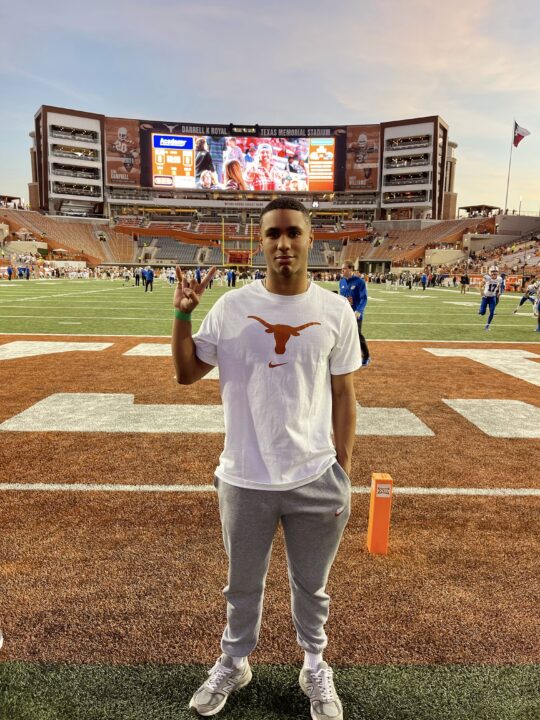 The bounds of the Texas men’s swimming & diving machine seem to know no bounds, and the Longhorns hopes for a run at a 2022 NCAA title seem to have gotten a little stronger on Monday.

South African swimmer Kobe Ndebele has announced his commitment to join the Longhorns. He’ll arrive with the team in spring 2022, and plans to compete for the team this season.

Ndebele trains with the Seals Swimming Club in Pietermaritzburg, South Africa, and has since January of this year. That’s the same club that has produced, among others, fellow spring 2022 arrival Matt Sates of Georgia.

Ndebele’s best chance for an immediate contribution at the NCAA Championship level would be on a 400 or 800 free relay, depending on how quickly he adapts to Texas’ training. That all is under the guise that the Longhorns will almost definitely have to leave swimmers home again. The sprint group is led by Drew Kibler (43.74 this season), Daniel Krueger (#2 nationally in 43.05 this season), and 5th year senior Cameron Auchinachie (a transfer from Denver).

Breaststroker Caspar Corbeau has also shown some good freestyle speed that didn’t appear much in his freshman season at Texas – he swam 43.89 against Virginia last week. Carson Foster is the other contender for that final spot in the 400 free relay – he swam it against Virginia and split 43.44 on a rolling start.

The 18-year old Ndebele is a rare international recruit for Eddie Reese’s Longhorns. The only other notable example in the last decade, or more, is Joseph Schooling of Singapore, but even he went to high school in the United States.

Texas are the defending NCAA Champions in men’s swimming and have won 5 of the last 6 national titles.

I remember my coach saying that the athletic department, and all the teams we sponsored, was expected to bring in a certain number of out-of-state students. If we didn’t hit X, New York State would cut a certain portion of funding (we were a public school). I wonder if bringing in international students would also be important, but I don’t know.

Eddie brings in National titles, I think the AD is less worried about student quotas

Different schools definitely have different pressures. A school like the University of Texas probably doesn’t need to rely on their athletics department to bring in ‘full rate’ tuition students – the department is profitable without any accounting games about “tuition is revenue,” and the school attracts a lot of out of state and international students already.

If anything, further highlights the gap between different schools and why college athletics are the way they are.

Just thankful Texas losing to Kansas this weekend didn’t turn him away!

Vandy is excited to have them join the SEC! 😏

Caspar is the same boat as Joe-international swimmer who did HS in the US.

They had an Israeli breastroker about 5 years ago

5
0
Reply
JP input is too short
Reply to  Ghost

9
0
Reply
Ghost
Reply to  JP input is too short

Ehhh. Caspar is an American who represents another country internationally. He was born in California. I don’t know for sure if he ever lived in the Netherlands for any significant period of time – I can try to find out, but I get the sense that he’s more-or-less been raised in the US.

Caspar is definitely a US citizen.

Joe lived in Singapore until he was 13, and as far as I know is not a US citizen.

Caspar has dual citizenship, so he’s not just an American.

Does he speak fluent Dutch?

You should ask Caspar Corbeau or Joe Schooling.

Corbeau was born and raised in the US

Borgstroem is on the roster, but they don’t heavily recruit internationally. In my experience, teams opt for international guys when it’s harder to get USA kids (international swimmers more likely to commit to lesser known/not top tier programs).

Honestly that is the easiest way to build a program if you’re a new HC of a Power 5 team. Luck out on a couple international kids to score high at NCAAs until top tier USA kids are interested enough to attend. Louisville/NC State are two programs where that seems to be working.

If I had to guess, Texas doesn’t recruit much outside the states because they can get all the talent they need from the U.S.

My guess is it is because of the scholarship gymnastics Texas has to play with all their current elite talent. I doubt that a single swimmer on that roster is on anything close to a full athletic scholarship–the rest is subsidized by in-state tuition (why they love to recruit guys from the state), or need-based FA. Many public universities do not provide FA to international students, so if they aren’t from a family of money, they’d need all of their costs to be covered by an athletic scholarship, which Texas just doesn’t have the room to offer.

There was a rumor I once heard that Schooling wasn’t on an athletic scholarship to Texas. But the majority of international students are… Read more »

dont think they need to lol, and plus scholarship $ is probably an issue in terms of getting internationals on board

1) Eddie feels a loyalty to be preparing the USA National Team swimmers as opposed to rival countries
2) They’re able to get so much talent from the U.S., they kind of don’t “need to” — i.e., they’ve won without it

Because Texans can’t pronounce names with 4 consonants in a row.

they don’t need to

1) They don’t give out full rides
2) They generally don’t need to. They do very well without international recruits

Your question was answered in depth by Eddie Reece in the outstanding interview Brett Hawke did with him. https://www.youtube.com/watch?v=FayDPtjvCpk&list=PLAXP8ncj_YRL85IE-p_t0yqLkEtfLb_iS

In short, 1) He has a preference for developing American swimmers because many go on to represent the U.S. in the Olympics (29 of his swimmers have made the Olympic Team) and 2) Most foreign athletes need more scholarship money than in-state or American athletes do. With only 9.9 scholarships and 26 swimmers making NCAA cuts, that doesn’t leave much money for foreign athletes. My guess is that Kobe is receiving only a very small stipend of a scholarship, if anything.