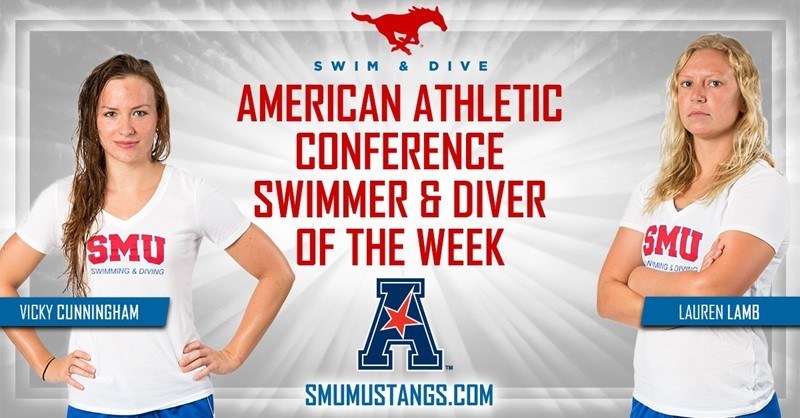 PROVIDENCE, R.I. (SMU/The American) – Seniors Vicky Cunningham and Lauren Lamb swept the American Athletic Conference weekly awards following their performances in a weekend dual sweep, which included wins over league foe Houston and Rice. This is the first honor for Cunningham, while Lamb has won the award twice before.

Cunningham went six-for-six in individual races and was part of two relay wins to help lead the Mustangs over the weekend. The Chester, United Kingdom, native earned victories in the 50-, 100- and 200-yard freestyles and anchored the SMU 400-yard freestyle relay at both events. Her time in the 50 against Houston currently stands as the third fastest in The American. So far this season, Cunningham has an NCAA B cut in the 100-yard freestyle and has posted the fastest time in the conference in that race.

Lamb took home maximum points on both the 1 and 3 meter springboards to help the Mustangs to their win over Rice, finishing just shy of the NCAA Zone qualifying score on 1 meter. She also placed third on both boards in the Houston meet.

The Mustangs are back in action on Friday when they host their last home dual of the season. AAC opponent Tulane comes to Mansfield, Texas, for an 11 a.m. CT event. Follow live at www.sidearmstats.com/smu/swim, or on the Meet Mobile App.