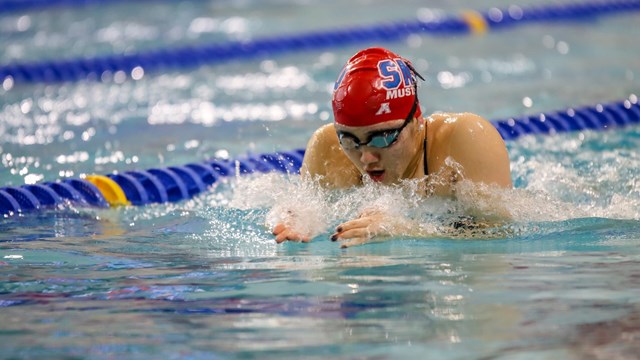 The Mustangs travel to Texas on Friday for their final dual meet of the season. Diving is slated to begin at 12 p.m. with swimming to follow at 3 p.m. Results can be found on SMUMustangs.com and Dive Meets. The event is closed to the public.

Stevens continued her freestyle dominance for the Mustangs, leading an SMU sweep of the 50- and 100-yard events. Watson won the 200 free and 400 IM.

Mustang divers faced North Texas in exhibition action at the event, sweeping both boards. Senior divers led the way for SMU, with Taylor Ohlhauser and Katie Crown posting career days. Ohlhauser registered a personal-best 325.43 to lead all divers on 3 meter, with Crown coming in with her career mark of 312.23 for second. On 1 meter, Ohlhauser’s new personal best of 305.48 led the field.

Scouting The Longhorns
Texas is ranked No. 1 in the CSCAA Division I Top 25 Poll. The Longhorns are 1-0 in dual meets this season, with a win over Texas A&M.

Making The Cut
All four divers have achieved two NCAA C Zone scores during the 2020-21 season. Johanna Holloway (1m, 3m), Taylor Ohlhauser (1m, 3m) and Nicole Stambo (1m, 3m) have qualified for the 2021 NCAA Zone D Diving Championships in March based on the NCAA’s updated Zone qualification standards. Both Ohlhauser and Stambo have surpassed the newly designated NCAA A score (295.00) on 1 meter.

On the swimming side, Olivia Grossklaus has achieved the NCAA B standard in the 200 fly for the third consecutive season.

Ohlhauser posted career performances on both boards against UNT, leading the field with a six-round 305.48 on 1 meter, which exceeds the NCAA’s newly created A Zone qualifying score. On 3 meter, she posted a 325.43 to take the top spot.

Stevens swept 50- and 100-yard freestyle events against Texas A&M and conference opponent Tulane. She also helped SMU to wins in the 200 free relay in both meets, and in the 400 medley relay against Tulane. In all, Stevens has won six individual events since returning to the Mustang line-up in January. Both her 50 and 100 times rank top six in The American.

Around The League
The Mustangs currently hold the top time in two swimming events around the league and have 12 times in the top three.
Indra Vandenbussche | 50 free
Olivia Grossklaus | 200 fly

Academic Excellence
The Mustangs continue to excel in the classroom, earning College Swimming and Diving Coaches Association of America (CSCAA) Scholar All-America honors. Teams were selected on the basis of their fall grade-point-average, and must have achieved a 3.0 GPA. SMU posted a 3.59 GPA in the fall.

Looking Ahead
The Mustangs have their final tune-up on Saturday, a pre-conference time trial event, before hosting the American Athletic Conference Championships Feb. 18-20 at The Nat. Both events are closed to the public.