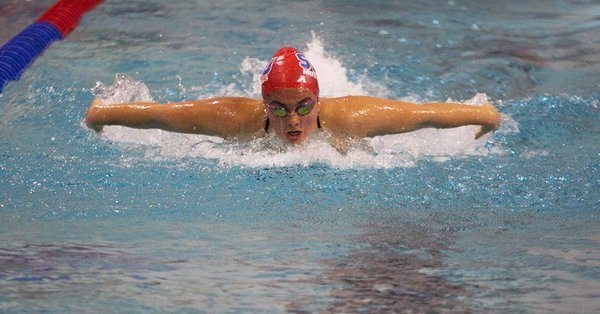 FORT WORTH, Texas (SMU) – The Mustang men’s swimming and diving team opened the 2019-20 season in dominating fashion, with a 171-125 win over Metroplex rival TCU on Friday afternoon at the Campus Recreation Center.

The Mustangs swept the boards, with sophomore Parker Hardigree and freshman Peter Smithson splitting wins to lead SMU. Hardigree won 3 meter in a career-best, NCAA Zone qualifying score of 345.52, while Smithson led divers on 1 meter at 297.45.

In relay action, the Mustangs’ A relay finished second in both the 200-yard medley and 400-yard freestyle relays.

SMU is back in action for its home opener Saturday, Nov. 2 when LSU visits the Robson & Lindley Aquatics Center. Action is slated to begin at 1 p.m. Live video and swimming results are available at SMUMustangs.com, with diving results available on DiveMeets.com.

The SMU women’s swimming and diving team picked up 11 event wins in a 180.5-119.5 victory over Metroplex rival TCU on Friday afternoon at the Campus Recreation Center. The win improved the Mustangs’ dual record to 1-1 this season.

In butterfly action, Valentina Becerra and Olivia Grossklaus teamed up to give the advantage to the Mustangs, with Becerra debuting this week with a win in the 100 fly (56.34) and Grossklaus continuing her dominance of the 200 (2:04.03).

The Mustangs also swept relays at the event, as Anderson, Grobler, Trahan and Sam Smith opened the evening with a win in the 200-yard medley relay. The evening closed with a victory for Smith, Gursoy, Alex Stevens and Trahan in the 400-yard freestyle relay.

In diving action, freshman Nicole Stambo earned her second career-win on 1 meter, doing so with a season-best, NCAA qualifying standard 288.30.

SMU is back in action Saturday, Nov. 2 when LSU and North Texas visit the Robson & Lindley Aquatics Center. Action is slated to begin at 1 p.m. Live video and swimming results are available at SMUMustangs.com with diving results available on DiveMeets.com.

Izzy Ashdown earned NCAA Zone Cuts on both 1- and 3-meter boards. The junior took 3-meter with a score of 306.90. Faith Harms-Zacharias collected her third qualifying score of the season on 1-meter.

Two’s Better Than One

A trio of Horned Frogs won two individual events against the Mustangs.

TCU swept the 200 Fly thanks to Sadlowski, Michael Chwaluk and Charles Millette. Chwaluk finished .42 seconds behind Sadlowski while Millette’s time was 1:55.73.

Another dual meet awaits TCU as it hosts UIW on Nov. 8.