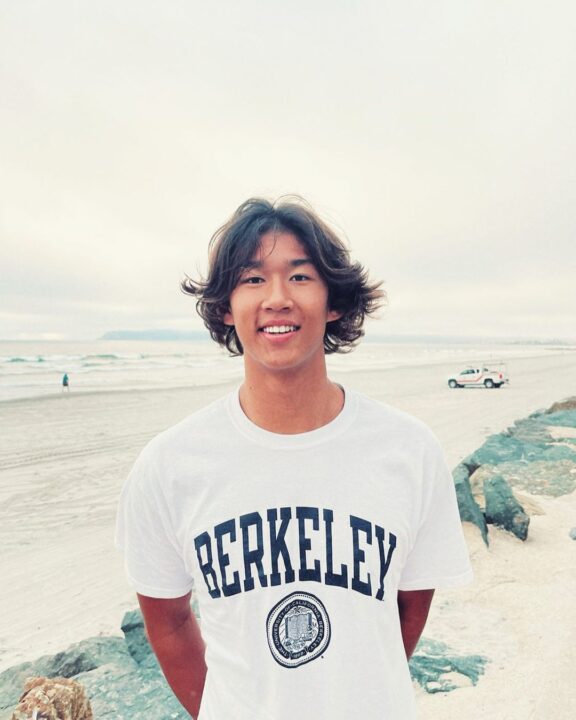 The defending NCAA Champion men from Cal are reloading in a big way in the class of 2024. The latest commit is one of the top breaststrokers in the group.

The defending NCAA Men’s Swimming & Diving Champions from Cal have turned on Dranchise Mode and are reloading in a big way. Nick Mahabir, an Honorable Mention top recruit in the high school class of 2024, verbally committed to the Golden Bears on Saturday. His commitment comes a day after the defending Commonwealth Games champion Pieter Coetze from South Africa announced his commitment.

At the Junior Pan Pac Championships in August, which featured top juniors from countries like Canada, Australia, and the US, he won bronze medals in both the 100 and 200 breaststrokes. He was also the US Junior National Champion in both events.

Mahabir trains with Team Elite in San Diego – the David Marsh-affiliated elite training group that is currently based out of Coronado Swim Association. Marsh was recently named the associate head coach of the women’s swimming & diving program at Cal, which has combined under Dave Durden since Teri McKeever was put on a Leave of Absence earlier this year.

A fairly-pure breaststroker, his 3rd event is probably the 200 IM in a college format.

That doesn’t mean that the cupboard will be empty for a deep Cal team, though. This year’s roster features a pair of freshmen, Luca Gissendaner and Hank Rivers, who both swam 53 seconds in the 100 breaststroke in high school. They’ll also bring in Roman Jones, who was 53.8 as a high school breaststroker, last season.

While Cal is in a two year period (last year and this year) that will see them graduate a ton of their NCAA points, they continue to back-fill their roster with depth in almost every part of the swimming lineup.

Klein trains at SwimMAC Carolina, where Marsh was formerly the head coach.

Is he definitely enrolling in 2024, or is he possibly deferring to fulfill his Singapore military requirement like Zach Tan?

Is Nick a US citizen or Singapore citizen? Only Singaporeans have to fulfill national service.

I just learned that Nick is a US citizen so he does not have to do national service, but he can represent Singapore in international meets including the Olympics based on his mother’s Singapore heritage.

Isn’t Zach Tan a US citizen as well?

Singapore does not recognize dual nationality after the age of 21.

I’m not an expert on national service in Singapore, but…I’m not sure being a US dual citizen gets him out of it on its own.

Braden,
I’m not an expert on Singapore national service (although I lived in Singapore from 2003-2007), but in Coleman’s SwimSwam interview Nick Mentioned that he was born in Singapore to an American father and Singaporean mother, and moved to the US when he was 7. He then on to say he was a US citizen and carried a US passport. I believe in this situation Nick would only be subject to national service if he establishes permanent residency in Singapore before the age of 40, unless otherwise exempted.

To answer UVA fan, I believe Zachery Tan moved to the US at age 17 or so to get better swimming training in the US. I believe both of his parents,… Read more »

If Nick is a citizen of Singapore, he will have to do national service even if he is a US citizen. We don’t know for sure whether he is a citizen of Singapore, but I believe he is, given he is born in Singapore to a Singaporean mother. There is a way out of national service for kids who leave the country very early, but that is only for kids who entirely do not make use of any public benefits in Singapore. Nick probably has missed that boat since he is on the national team and comes back regularly. But if he hits an A cut for Paris there is a good chance he gets a deferment (similar to Quah… Read more »

Ah yes you’re right FINA requires citizenship. Singapore does not allow minors (below 21) to renounce citizenship. So I think it’s safe to conclude that he is liable for national service at some point.

I’m sure it could be politically very complex if it came down to it. Like, if he says “I renounce my Singapore citizenship!” and just stays out of Singapore, they’re not going to petition the US government to extradite him.

I think at this point though it’s fairly clear that he’s not renouncing, so yes, I assume that he’ll take the Schooling/Quah route and defer his service as long as he can.

You’re absolutely right. It has happened before – look up Ben Davis (soccer). Singapore is small and one could be careful never to re-enter, but I imagine it isn’t fun living the rest of your life as a minor fugitive, whether or not one agrees politically with mandatory military service.

I also surmise that currently Nick holds dual citizenship from both the US through his 20.59 father and Singapore through his mother. Since he has represented Singapore in international competition it is virtually assured he cannot compete for a different country (ie the US) until at the very earliest he turns 21. Since Singapore does not allow dual citizenship, Nick must decide if he wants to give up his US or Singapore citizenship.
National service obligation can be deferred if an athlete represents Singapore in the Olympics, so Nick is focused on getting his Olympic A cuts in breaststroke. What is total speculation is how Nick’s citizenship issue (which did not apply to either Joe… Read more »

babe wake up, i was right all along about cal’s 2024 class

It’s not a dream

Roll on you Bears indeed.
Congratulations Mr. Mahabir. Can’t wait to watch you swim at Spieker.