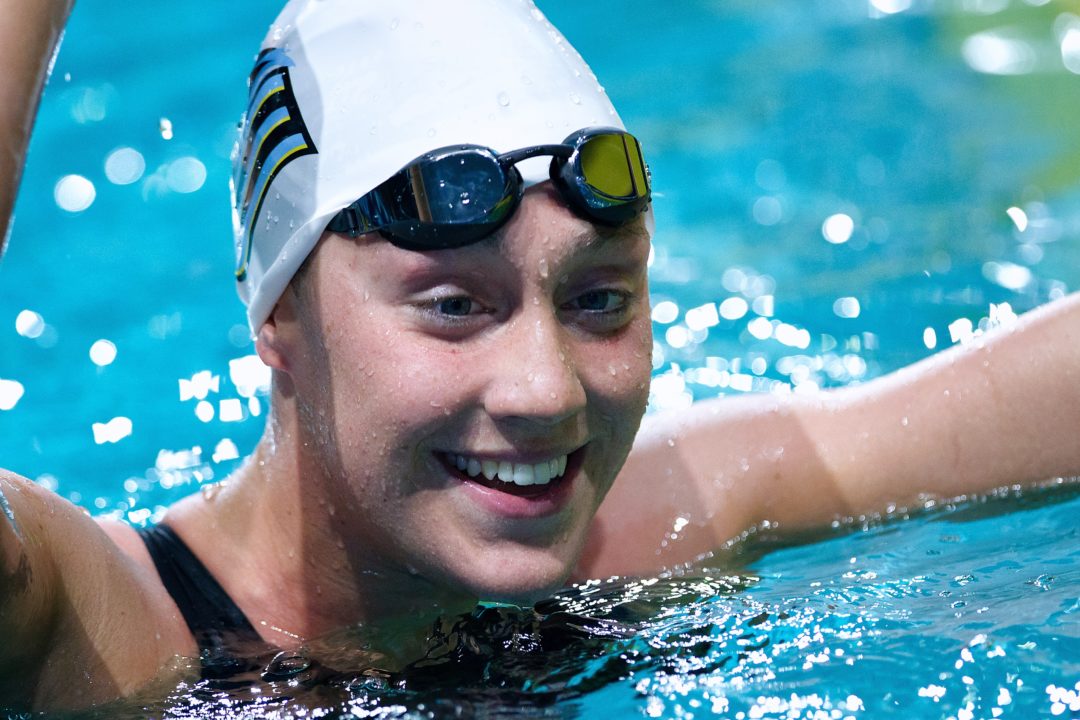 The women’s meet was highlighted by Garioch Amateur Swim Club’s Hannah Miley who scored the first win on the day.  She nailed the victory in the women’s 800m freestyle in a time of 8:30.39. This doubled up on Miley’s 400m freestyle win from yesterday, where she snagged the top spot in a time of 4:07.57. Miley would add a 3rd win to her meet total, taking the victory in today’s 400m IM event in a time of 4:31.92, a mark which cracks the world’s top ten for 2015.

The University of Bath earned a trio of wins on the day on the women’s side, starting off with 22-year-old Anne Bochmann’s 200m freestyle win in a time of 1:58.77.  Teammate Elizabeth Simmonds then cleaned up on the backstroke events today, first winning the 50m backstroke in a blistering time of 26.39. That marks Simmonds’ best of her career, with her previous personal best sitting at the 26.45 she registered at 2013’s Scottish Short Course Nationals. Her time today was just .04 shy of the national record, which is held at by Georgia Davis at 26.35.

The Manchester home crowd got to cheer loudly for its club swimmer Rebecca Guy, as she tore up the 50m freestyle field, winning in a time of 25.21.  Plymouth Leander’s Emma England was runner-up in that race, but, at just 15 years old, crushed a new British Junior National Record in the event with her 25.62 2nd place finish.

Several clubs touched the wall first across the men’s events over the course of the day, starting with a Cardiff Swim Club showdown in the 200m IM. Ieuan Lloyd and Xavier Mohammed went head-to-head within the race, with the two being separated by just .01 of a second. The two also went 1-2 yesterday in the men’s 200m backstroke, but Mohammed picked up that win. Today,  Lloyd took the 200m IM victory in a time of 1:56.78 to Mohammed’s 1:56.79. For Lloyd, the time signifies his fastest since the 1:55.41 personal best he clocked last November, while Mohammed’s time today knocked over a second off of his previous career-best of 1:58.08.

Manchester Aquatic Club fans were on their feet once again, this time for a home club swimmer, Christopher Steeples, who earned the 200m breaststroke win in a mark of 2:12.45, his best time by over a second. Sheffield’s Nicholas Grainger then wrangled in the win in the men’s 400m freestyle event, touching in 3:44.05 to clock a new personal best for the 21-year-old.

Preston Swim Club’s Ryan Bennett raced his way to a 51.86 top finish in the men’s 100m backstroke, followed by Mohammed’s runner-up mark of 53.37.  Of note in the race, however, was 15-year-old Elliot Clogg who registered a brand new British Junior National Record with his 54.89 mark to earn 4th place.

James Disney-May, Liam Tancock, Siobhan O’Connor and Chris Walker-Hebborn all appeared on the initial entry lists for day 2 of the meet, but none appeared within today’s prelims meet results.