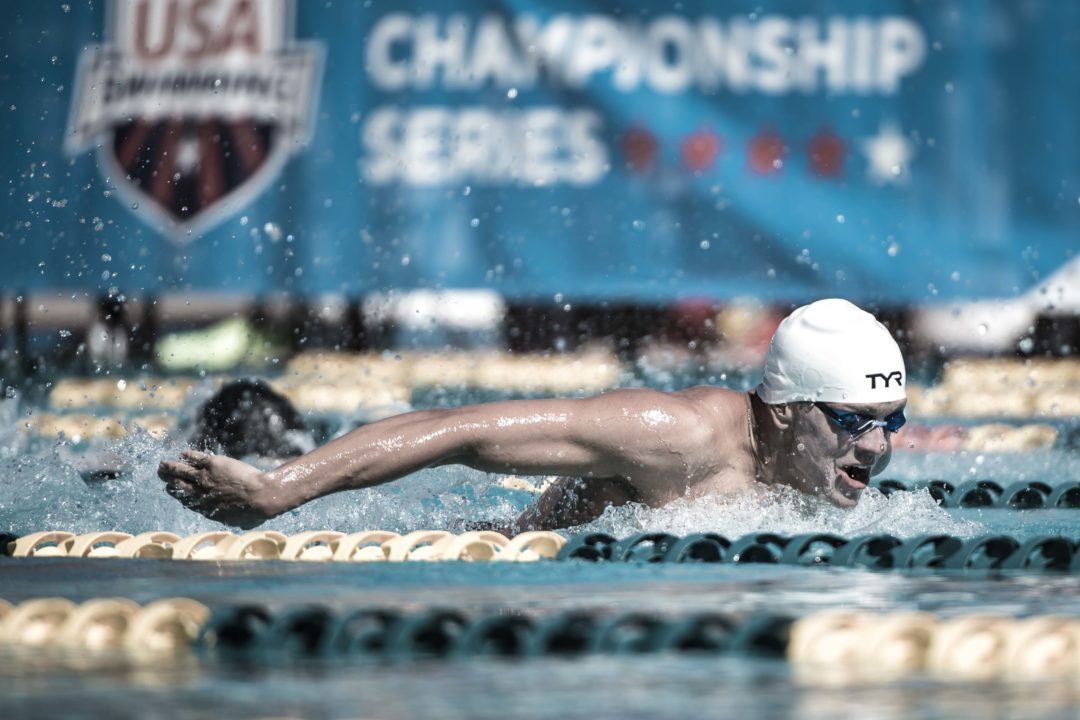 On the final night in Irvine, Americans Tom Shields and Amanda Kendall continued to perform well, this time in the 100 butterfly as both cruised to victories. Shields won the men’s event by nearly two seconds, while Kendall finished in excess of three seconds over the runner-up in the women’s event.

Shields put up a time of 52.57 for the win, just shy of his season best 52.42 from the Mesa Pro Swim earlier in the month. That time from Mesa ranks Shields 24th in the world for the 2016-17 season. Though that ranking may seem low for someone like Shields, that time from Mesa is over half a second faster than he was there two years ago, when he went onto finish 4th at the World Championships in a best time of 51.03.

Kendall’s swim wrapped up a very successful meet for the Canyons Aquatics member, as she touched in a new personal best of 58.27. That moves Kendall up to 17th in the world for the season, and marks her as a major threat to make the US World Championship team at their upcoming trials in two months time. Kendall also won the 100 free and finished 2nd in the 50 free earlier.

As a whole the New Zealand team performed very well over the course of the meet, adding five more wins on the final day.

The NZ men took three of the teams victories on Sunday, led by Andrew Trembath who out-touched runner-up Justin Nguyen to take the men’s 100 back by six-one-hundredths in a time of 57.98. George Schroder completed the breaststroke sweep with a win in the 100m event in a time of 1:02.90, and Bradlee Ashby did the same in the IM, taking the 200 tonight in 2:04.35.

Other winners on the night included Riley Scott completing a breaststroke sweep of her own winning the 100 in 1:10.54, while Michael Brinegar closed out the meet with a win in the 800 free (8:14.79) after winning the mile on day one.

Also finishing atop the podium was Canyons Isabella Arcila, who defeated New Zealand’s Gabrielle Fa’Amausili in the 100 back, 1:03.08 to 1:03.29.

RACE VIDEO
He’s in lane 3. And he swims in a simple swim brief!
https://www.youtube.com/watch?v=kM4LORUUEgk

Just imagine what he will do as an 18 year old Ryan Murphy was a 1:02.68 at his age. Josh Zuchowski is quite impressive too

What is Ryan Murphy’s height when he was 12-13? RD won’t be as tall as RM at 18 years old, based on observation

I hope Amanda makes the team in something!! All of her swims looked amazing.