She Swam For Greece 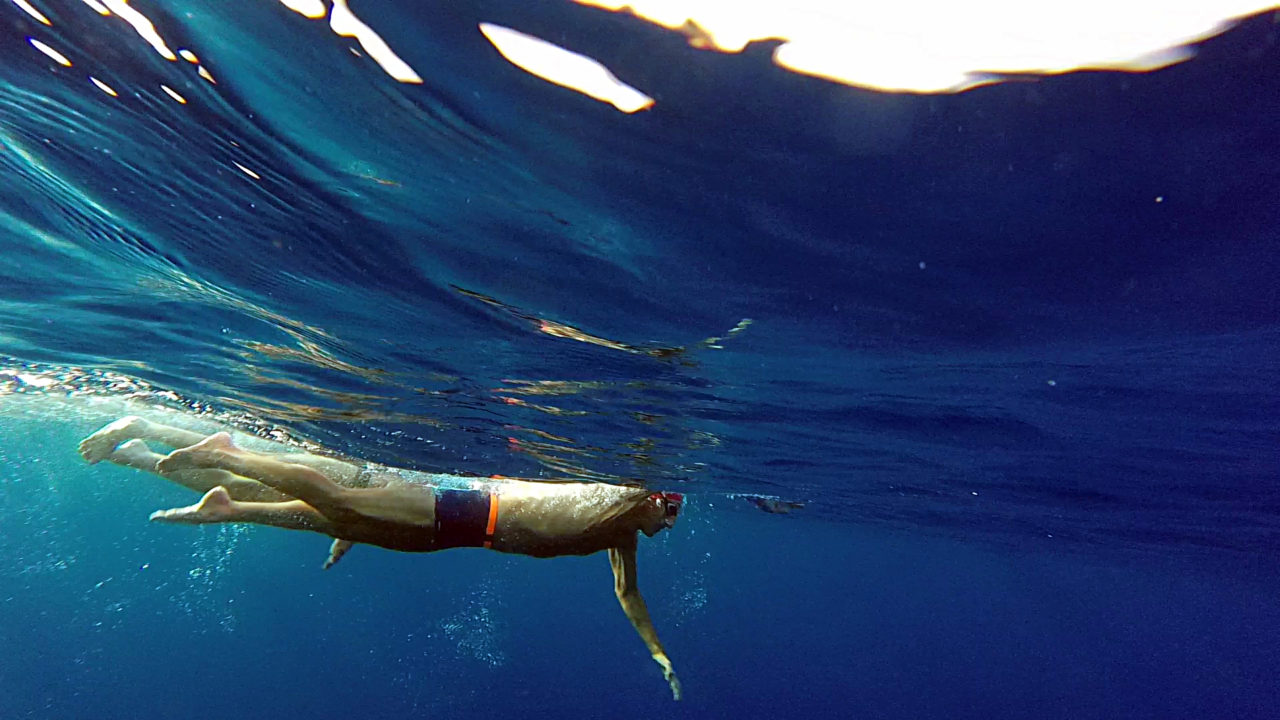 Members of the Underwater Surveying Team replicate the first, ancient swim marathon exactly 2,500 years afterwards. The 13 kilometer swim was completed by Hydna and her father Scyllis in 480 B.C. on the eve of the Battle of Artemisium fought between the Greek and Persian naval forces.

The Battle of Marathon is forever evoked in humanity’s collective memory from the achievement of one determined soldier; Philippides who was sent from Marathon to Athens to share the news of the Persian defeat in the battle in the year 490 B.C. and immediately after doing so lost his life to exhaustion. The jaunting length he covered, in his cumbersome uniform no less, is replicated by members of the running community around the world throughout the year as a marathon or ultimate runner’s achievement. In the development of the persistent fighting between Greece and the Persian Empire, what happened exactly 10 years later during late August or early September of 480 B.C., forever changed the course of global history as we know it. This time, the credit goes towards a woman by the name of Hydna of Scione and her father Scyllis of Scione. Together they completed a once-in-a-lifetime swim from the Pelion Peninsula to Evia Island, a 13 kilometers (or 7 nautical miles) distance that had not been replicated in 2,500 years. That is, until last weekend on Monday, August 31st when three members of the Underwater Survey Team, representing the School of Rural and Surveying Engineering at Aristotle University of Thessaloniki, Dr. Kimon Papadimitriou, Dimitris Giouzepas and the author had the honor to retrace this eventful but lesser known marathon swim.

Hydna had been trained to dive to impressive depths and become a confident swimmer by her father Scyllis. In fact, their skills were recognized by so many that it was what attracted King Xerxes I to capture the duo and force them to recover treasure from shipwrecks for him. 10 years after the Persian forces’ defeat at the Battle of Marathon, King Xerxes I was actively pursuing a decisive chance to assert his army over Greece. At the time of the legendary Battle of Thermopylae, the war at sea had also resurged. According to Herodotus, King Xerxes I moored a fleet of 1207 ships and the Greek fleet had 271. On the eve of the Battle of Artemisium, the Persian navy was forced to moor their fleet directly off the coast of Mount Pelion towards Evia Island. This stroke of luck allowed Hydna and her father a chance to slip away into the dark waters of the Aegean. It was then, as the Greek geographer Pausanias (110 A.D.-180 A.D.) wrote his accounts during the 2nd century A.D., that Hydna and her father’s open-water crossing over a distance of 10 miles would lead to a change in the tide of history.

“When the fleet of Xerxes was attacked by a violent storm off Mount Pelion, father and daughter completed its destruction by dragging away under the sea the anchors and any other security the triremes had.” (Pausanias, 10.19.2). Having used knives to cut the ropes of the anchors to destroy the ships and also being able to do so undetected by the multitude of soldiers from every corner is an impressive feat in and of itself. What Hydna and Scyllis did next -swimming, side by side, 10 miles to Evia Island to reunite with the Greeks and inform them of the Persian’s battle plans- was able to give the Greek forces a huge advantage in the battle.

For the fact that this event occurred in late August to early September of the year 480 B.C., there is little remaining information about what happened next to Hydna or her father. What does remain is Pausanias’ own account that the Amphictyons, which was a religious council representing the Greek city-states, had statues made of Hydna and Scyllis at Delphi, the sacred religious sanctuary. Tragically, the statues have been lost in the sands of time. Pausanias recounted that Nero took at least 500 statues from Delphi back to Rome and that they were statues of both gods and men (Smethzy) and that the statues of Hydna was one of these (Pausanias). It is worth noting that Nero’s desire for collecting art throughout his empire and his many expeditions of plunder have been well-documented by other historians and archaeologists.

This weekend, the 1st open-water marathon, retracing history’s first recorded marathon, The Authentic Marathon Swim will take place this weekend from September 4th-6th in honor of the courageous and grueling swim made by Hydna and Scyllis. The marathon-swimming event will allow swimmers to cover 10 km, 3 km and 1.5 km distances, as well as an 800 m event for all. Swimmers are travelling above hundreds of meters of ancient history during this event. Keeping true to history, just as the first marathon run was done by a single individual, this event relives the sense of togetherness that would have been felt between a daughter and her father. Upon Hydna and Scyllis’ successful return to the Greek army, the relief and sense of accomplishment they felt is also recreated in the setting of this open-water marathon. As a female, it is also an important step in bringing more heroines in the historical legacy which helps create more opportunities for everyone today.

Kaitlyn Waters is currently a member of the Underwater Surveying Team from the School of Rural and Surveying Engineering, Faculty of Engineering at Aristotle University of Thessaloniki. Kaitlyn is the Public Relations Representative for an ongoing project from the European Union called ScienceDIVER which fosters collaborations and structures between academia and industry in order to offer standardized training and clear career pathways to the diving scientists. She loves the sea as much as she loves sharing this passion with others. Kaitlyn graduated from the School of Journalism at Aristotle University with an M.A. in Risk Communication & Crisis Journalism in Thessaloniki, Greece and has a B.A. in Sociology & Anthropology and Spanish from Warren Wilson College in Asheville, N.C., U.S.A.

I’m a historian and a swimmer and lover of good stories, so this is a perfect article if you ask me 🙂
Thank you!

You are the worst poster on this site. Sexism has no place in our community.

Thank you very much for your kind feedback! I’ll be submitting more articles with a historical context to the present-day in the upcoming future, hopefully! Cheers!

What a fantastic story to read! I’m a lover of Greece, the sea, swimming, and history. Hope to visit Greece again in the future and do some more swimming in the Aegean.

Thank you so much for your support! Swimming in the Aegean is truly without comparison.

Great history lesson! But how did Hydna and Scyllis not get lost?

Evia Island is directly across the straight, as the crow flies. Alternatively, if you try alternating your breathing on both your left and right side, you go straight way easier…