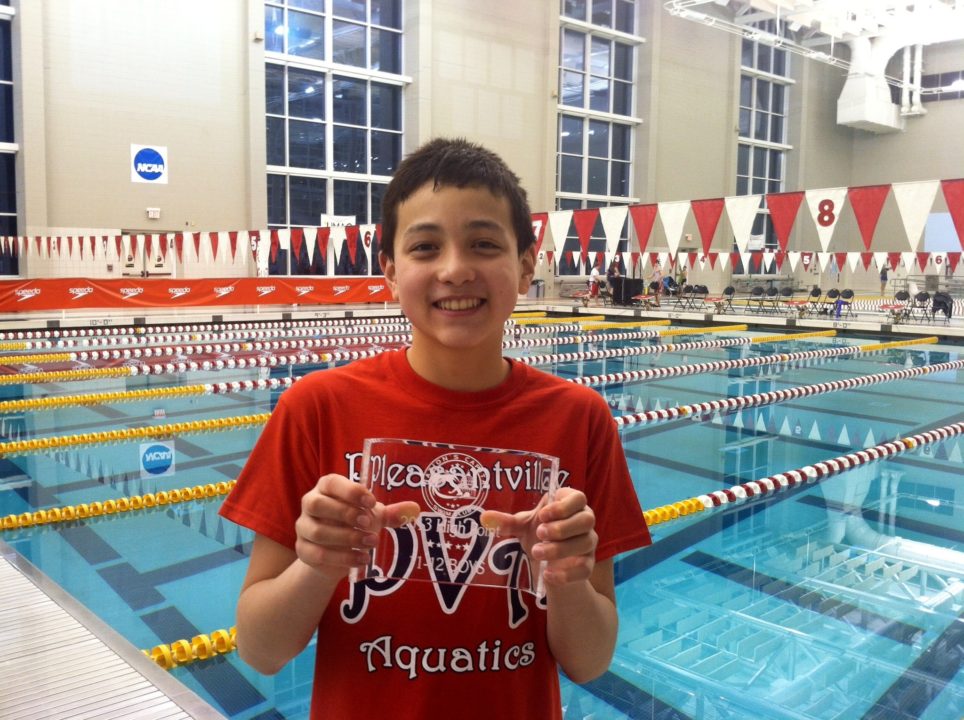 Less than 24 hours after Vinny Marciano was a 52.47 at the New Jersey Swimming Junior Olympics on Friday evening, Destin Lasco swam a 52.32 at the Middle Atlantic Junior Olympics elsewhere in the state to take the 11-12 National Age Group Record away.

These two have traded blows for the last few years in both the 10 & under and 11-12 national age group record lists for the backstrokes, and between them now hold the 6 fastest times in the history of that age group. Ryan Murphy was the record holder up until December of 2013 in 54.20, and that record is now almost two seconds gone.

Meanwhile, Marciano is far from done as well: while it’s unclear as to the timing of the two races and which came first, Lasco’s bid to hold all three 11-12 yards records was short lived. That’s because Marciano grabbed away Lasco’s 50 yard backstroke record at New Jersey’s JO’s, where he swam a 24.61 to break the 25.02 done by Lasco earlier this year, and be the first 11-12 under 25 seconds in that race.

Note that due to different event orders, Lasco still hasn’t swum the 50 back this weekend, so there’s a chance that things could swing back again.

Good fun competition; reminds me of a good game of H-O-R-S-E!!!

These two are unreal. Going to be a great battle through the ages.

It’s shaping up to be a Murphy/Conger situation… except, maybe better???

Scary thought that they are 2 seconds ahead of Murphy… no… terrifying.

I don’t know if the rivalry will be better than Murphy – conger, but my guts feeling tell me Destin Lasco will become even greater backstroker than either Murphy or Conger