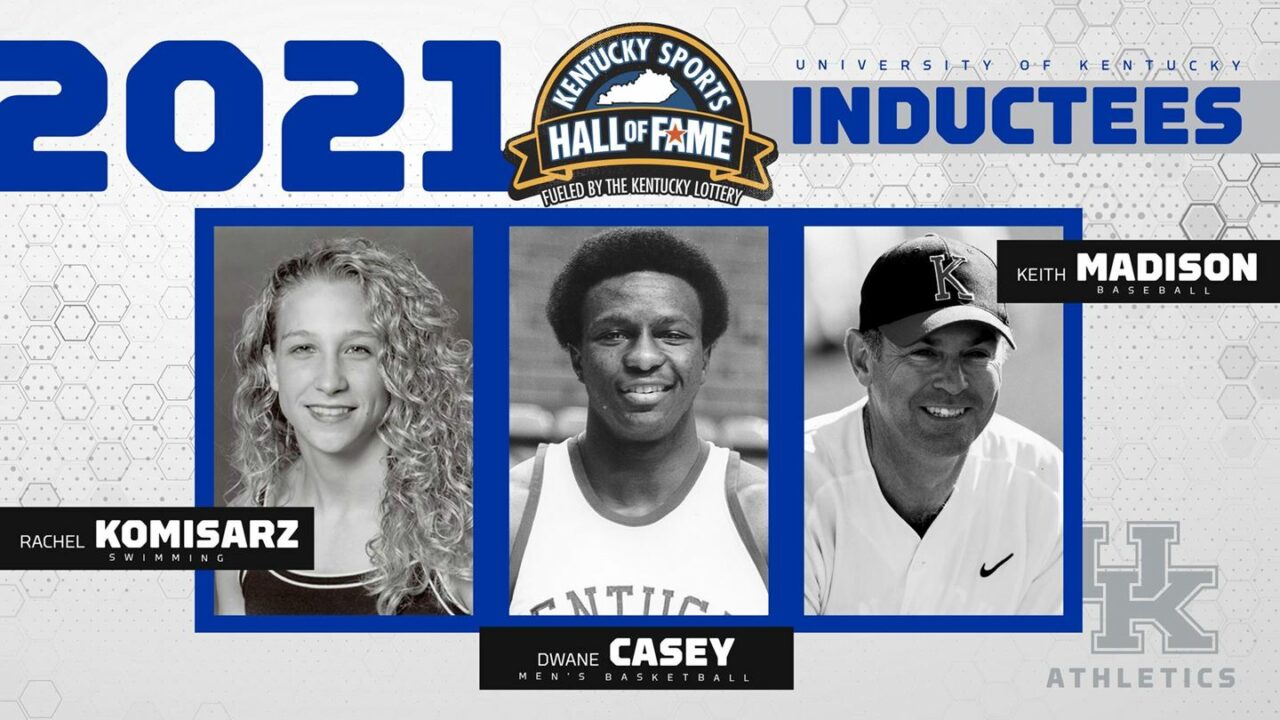 Komisarz Baugh, along with Dwane Casey and Keith Madison, will be inducted on September 7 at the Galt House Hotel in Louisville. Current photo via Kentucky Athletics

LEXINGTON, Ky. – Three University of Kentucky coaches and athletes – Dwane Casey, Rachel Komisarz Baugh and Keith Madison – have been elected to the Kentucky Sports Hall of Fame, as announced Thursday by the Louisville Sports Commission.

The UK representatives are part of this year’s six-person KSHOF class, which will be honored on September 7 at the Galt House Hotel in Louisville.

Currently the head coach of the Detroit Pistons, Dwane Casey both played and coached at UK. A four-sport star at Union County High School in Morganfield, Ky., he played basketball for the Wildcats from 1975-76 through the 1978-79 seasons and was a member of the 1978 national championship team. He was an assistant coach in 1979-80 and from the 1986-87 through 1988-89 seasons. He also coached at Western Kentucky and in Japan before entering the NBA in 1994 with Seattle.  He spent 12 years as an assistant for Seattle, Minnesota and Dallas, winning an NBA title with the Mavericks in 2009. He was head coach of the Minnesota Timberwolves for two seasons (2005-2007) and took the helm as head coach for the Toronto Raptors in 2011. In seven seasons, he led the Raptors to three 50-win seasons, four Atlantic Division titles, five consecutive playoff appearances and was named NBA Coach of the Year in 2018 by the National Basketball Coaches Association and the media covering the NBA.  He joined the Pistons in 2018 and in his first year led the team to a 41-41 regular season record and a trip to the playoffs after a two-year absence from the postseason.

Rachel Komisarz Baugh was a record-breaking swimmer, Southeastern Conference champion and All-American at UK from 1996-99, going on to earn two Olympic medals.  She set records in five individual events and four relays for the Wildcats. She won SEC titles in the 200-yard butterfly and the 500- and 1,650-yard freestyle and earned the Commissioner’s Trophy for scoring the most points at the 1999 SEC Championships. She earned six All-America honors over five events and also was an Academic All-American by the College Sports Information Directors of America. She was a member of the 2004 United States Olympic Team, helping win the gold medal in the 4×200-meter freestyle relay and silver medal in the 4×100-meter medley relay. She won 23 medals in her career while representing the U.S. in international competition, setting American records in the 50- and 100-meter butterfly and three relays. She also was part of a 4×100-meter medley relay that set a world record. After her competitive retirement, she spent several years in coaching and was inducted into the UK Athletics Hall of Fame in 2009. Currently, she is associate director for Aspiranaut in Nashville, a non-profit affiliated with the Vanderbilt Medical Center whose mission is to increase STEM achievement and diversity in the STEM workforce.

A native of Brownsville, Ky., Keith Madison was head baseball coach at UK for 25 years (1979-2003), leading the Wildcats to 737 wins, third-most in SEC history when he retired, and second-most wins for any coach in any sport in UK history behind Adolph Rupp. Madison was 26 when he took over at UK, the youngest Division I head baseball coach in history at the time, and coached 17 players who eventually played in the majors, including 2006 Cy Young winner Brandon Webb. He coached nine UK All-Americans, 20 first-team All-SEC selections, 89 SEC academic honors award-winners and led UK to two NCAA appearances. He is a member of the UK Athletics Hall of Fame and retired jersey honoree. In 2007, he was inducted into the American Baseball Coaches Association (ABCA) Hall of Fame and in 2013 earned the Lefty Gomez Lifetime Achievement Award for contributions to amateur baseball. Madison is a former president of the ABCA and currently chairman of the board. He and his wife, Sharon, devote their time to youth baseball instruction and baseball mission work.

Completing the 2021 KSHOF class are: