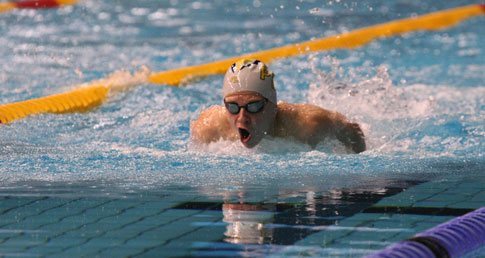 Sam Dailley along with fellow Plymouth Leander team mates enjoyed seasonal success at the ASA Short course winter championships. By the end of the 4 day meet, Sam’s xmas stocking was filled with 8 Gold and 1 Silver medal along with three new British Junior Records.

As Christmas approached and school was out, Sam headed to Sheffield to end the year with 4 days of quick back to back racing. Sam pushed the enveloping entering 9 events, with some so close only 10 minutes separated the fast heats like men’s 50 back and 100free in which Sam secured silver and Gold respectively.

By the end of day 2, Sam had tallied an impressive 4 Golds, 1 silver and set a new British Junior Record in 100 Fly in 54.25s which he secured in the Men’s Open B finals.

With the race intensity unrelenting the events continued one after another and on day 3. Sam continued his fine form in the morning heats securing a place in both Men’s Open B finals in 100 IM and 200 Fly and in the process setting a new British Junior Record in 100 IM in 57.77s.

As day 3 evening finals approached Sam pulled out all the stops to better his heat performance and in doing so he took junior Gold and won the 100 IM Men’s open B final smashing his earlier record in a eye blistering time of 56.97s. A quick swim down followed and Sam ready himself for the grueling 200 Fly in the B finals. Already pumped from his earlier success 15 year old Sam blasted his was to third in the Open B final taking Junior Gold and breaking the 6 year old British Junior Record in 2:00.17s.

The last day saw Sam swim his last two events at the end of a packed 4 days of non stop racing. Sam closed the year with a further two Junior Gold medals in 200 Free and 50 Fly. He goes home with a heavy bag of 9 medals and 3 records.