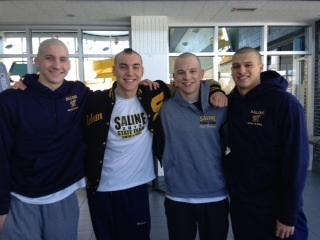 In preliminaries of the Michigan High School 1A State Championships, a quartet from Saline High has broke the National Public High School Record in the 200 medley relay with a 1:30.26. That shaves precisely .01 seconds off of the old record set by Hershe High School in 2009. That’s a relay that included current collegiate stars David Nolan on the backstroke and Sean Grier on the butterfly leg, along with Kyle Ruddle and Jeffrey Young.

The Saline squad of David Boland, Josh Ehrman, Adam Whitener, and Michael Bundas teamed up for the record-breaking swim, and will take the top seed into finals by four seconds.

That’s a quartet of stars for Saline high, just outside of Ann Arbor. The front-half are the leaders of this team, with the Louisville-bound David Boland also breaking a 1A State Record in prelims of the 100 fly with a 48.59. Ehrman, who will go to Purdue as a game-changer for that program, broke the all-class Michigan State Record in the 200 IM with a 1:48.30.

Whitener, the butterflier, will head to Virginia. Those first three legs are, according to collegeswimming.com, the top three recruits out of the state of Michigan in the class of 2013 . Bundas is also a senior, and is awaiting news of acceptance to the U.S. Naval Academy, where he plans to swim if admitted.

Ehrman had the record coming into the meet, though Boland was the defending state champion in the event. This year, Boland will swim the 100 fly and the 100 back.

Bolles still holds the overall record in 1:28.02. The public vs. private distinction is especially important in relay records, where independent schools are able to amass swimmers from different areas to form relays, whereas public schools have to find four swimmers in the same geographic area.

Makes me so happy to see awesome things coming out of Michigan – state pride!

well that’s the interesting thing about saline- they’re a school of choice. anyone can choose to attend. For instance Ehrman lives in Lincoln, Michigan

This is a bit of a dilemma in places like Michigan. It’s technically a “public school,” but kids also have a choice in where they should go. Perhaps NISCA will have to review their definitions on these sorts of schools.

A number of states and school districts with multiple highs schools have varying levels open enrollment.

But then with so many types of schools you have so many different classes for records, and then they begin to become meaningless

Why so,, homeschoolers that take maybe a course or two at the local high school would not be allowed to compete. I think at one team a U of A swimmer was homeschool in high and competed for the high school near him.