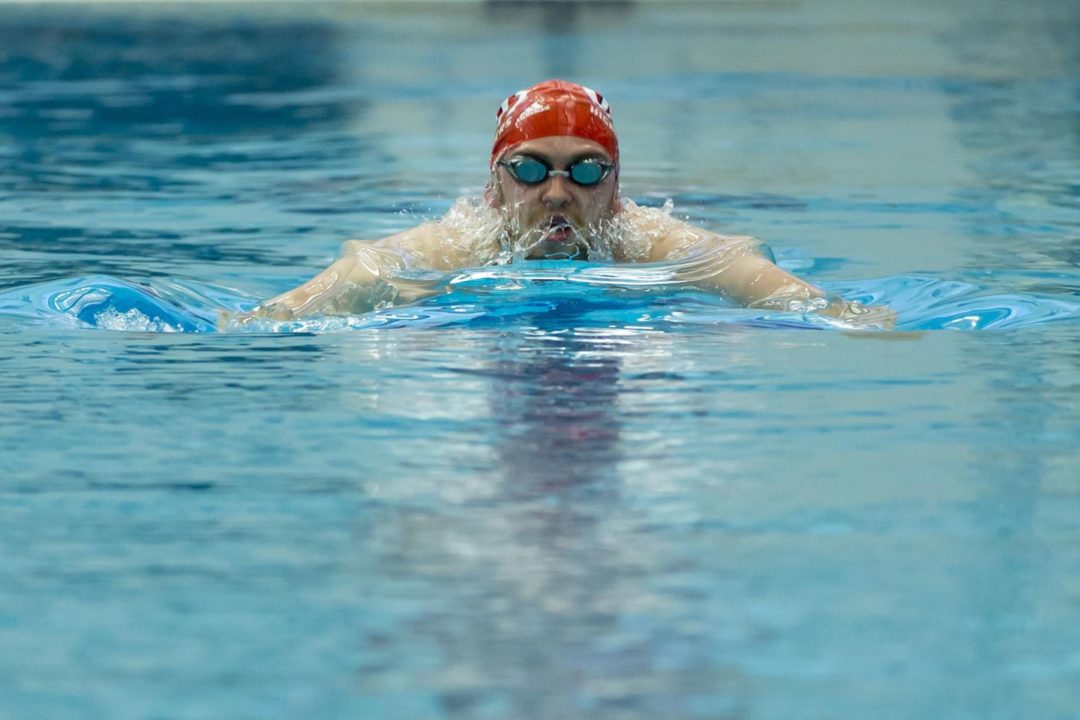 The NJIT men posted a clean sweep of its dual meet matchups at the Highlander Invitational, while Saint Francis (PA) did so on the women's side. Current photo via Mike McLaughin Photography, NJIT Athletics

Futures qualifier Tia Thomas of Silver Spring, MD has commitment to swim at Georgetown University beginning in the fall of 2021.

Freestyle and breaststroker Julia Strine has committed to swim for DI Ohio University beginning fall 2021. She will be joining the Bobcat’s class of 2025.

Swim Florida’s Conor Cranfield, a mid-distance and distance freestyler, has verbally committed to the United States Naval Academy for 2021-22.

A cluster of 7 coronavirus cases has been linked to the UNC Wilmington swimming & diving team, the school announced this week.

Three different Highlanders picked up victories for the Highlanders on Saturday. Mattheau Bonner won his first event of the year, taking the 100 Fly in 51.98. Joshua Franco‘s second win of the season came in the 100 Free (46.70) while Nicholas Lyons took his third race by winning the 200 Breast in 2:07.59.

“I am really proud of this team and how they finished this meet,” head coach Ron Farina said after the meet. “We had to battle with Saint Peter’s and they really stepped up in the clutch.  Nicholas Lyons won three races and our 100 Fly took three of the top five spots with the meet on the line. ”

Despite the final outcome, the Terriers had many great performances and they were highlighted by sophomore Alfred Christensson as he placed in the top five of all of his individual races. The sophomore competed in the 100-yard backstroke, 200-yard butterfly, 100-yard butterfly.

Freshman diver Matthew Bernstein also performed well at his first collegiate meet. He placed fourth in the men’s 1-meter diving event. He tallied a final score of 156.85 in the event.

UP NEXT:
The Terriers are back in action on Saturday, October 19, for the Iona dual meet in New Rochelle, NY.

Up Next
Both teams will enjoy a roughly month-long respite before gearing up for a home dual meet against both Kean University and Manhattan on Saturday, Nov. 9.

On Day 1 of the Highlander Invitational, the Red Flash recorded some impressive times and 1st place finishes for a good start to the weekend.

In the 100-yard backstroke a pair of SFU swimmers captured first and second places. Sophomore Amelia Laudenbach (Kambah, Australia/Trinity Christian School) placed first with a time of 59.88 and junior Urska Medvesek (Maribor, Slovenia/Gymnasium Maribor) was right behind in second with a time of 1:00.75.

Sophomore Annabelle McCullough (Mercersburg, PA./James Buchanan High School) swam a speedy 24.64 to get first in the 50-yard freestyle. Very close behind was O’Connor in second with a time of 24.93.

The 400-yard medley team of Medvesek, senior Erin O’Neil, McCullough, and O’Connor showed out placing first in a time of 4:00.60.

The Swim team came out on top securing three wins on day two of the Highlander Invitational. It was a team effort, getting some big first place wins.

The 200-yard Medley team of Medvesek, O’Neil, McCullough, and sophomore Julia Bradford (Edinboro, Pa./Villa Maria Academy) came in first with a time of 1:50.33.

O’Connor took first in the 100-yard freestyle with a speedy time of 54.28 to as well add to her successful weekend in the pool.

Laudenback took the 200 yard backstroke with a first place finish in a time of 2:06.66.

McCullough captured first in the 100-yard Butterfly in a quick time of 57.78.

Overall, a successful 3-win weekend for the Red Flash improving their record to 3-1 on the season. Next up for the SFU Red Flash will be another road trip, this time to Brooklyn, NY to take on LIU November 2nd.

NEWARK, N.J. – The LIU women’s swimming team beat two out of the three teams at the 2019 NJIT Invitational to take second at the two-day championship style meet. The Sharks beat both Saint Peter’s (239-84) and Manhattan (233-98) handily, while falling to perennial NEC foe Saint Francis U. narrowly, 185-129.

The LIU women’s swimming team had a dominating performance on the first night of the NJIT Invitational, swimming well against both local and Northeast Conference opponents. The Sharks had several top finishes on the night, led by junior Amanda Peren, who won two events.

Early on in the meet, LIU got itself in good standing, finishing second in the 200 free relay. The team of  Peren, Lydia Amon, Noemie Lacroix-Moreau and Kyleigh Barao came in with a time of 1:40.22

Other strong performances came from Jacqueline Grabowski, who came in third in the 100 back (1:01.48), and Jeanne Touchette-McGowan, who came in fourth in the 100 breast, in 1:10.64. But it was freshman Tara Cabiling who was the highlight of that race, as she won the event in a time of 1:08.09.

The Sharks capped the night with the 400 medley relay, coming in second and fourth in the event. The squad of Peren, Cabiling, Lacroix-Moreau, and Amon hit the wall in 4:02.15, while Touchette-McGowan, Mackenzie Burnett, Grabowski and Reyna Iwamoto came in at 4:08.32.

LIU had several top-three finishes in the pool, led by a first place finish by Cabiling in the 200 breaststroke.

In the final distance event of the night, the 500 free, LIU again had two top finishers: San Juan came in third in 5:18.68, while freshman Reyna Iwamoto came in right behind her in fourth, with a time of 5:19.45.

The Sharks capped the event with a win in the 400 freestyle relay, as the team of Amon, Lacroix-Moreau, Touchette-McGowan and Peren hit the wall a full second before their nearest competitors, in 3:39.73.

Up next, the Sharks will take part in a double-dual meet at Stony Brook University, taking on the host Seawolves and Sacred Heart, Saturday, October 26.

Newark, N.J. – Freshman Dillon Kadish (Hollywood, FL / Nova) made quite the entrance to Division I on day one of the Highlander Invitational hosted by NJIT, shattering the Manhattan school record for the three-meter dive with a score of 258.75.

Sophomore Lexington Passamonte (Rochester, NY / Greece Athena) continued the success on the boards for the Jaspers, recording a first place finish with a score of 178.00 in the one-meter event.

On the swimming side, sophomore Branden Deiss (Benoni, South Africa / Crawford College Lonehill) won the 1000 yard freestyle with a time of 9:52.51.

Another freshman also excelled in her first collegiate meet as Mackenzie Tuttle (Highland Mills, NY / Monroe-Woodbury) recorded a pair of top-three finishes, taking second in the 200 yard freestyle (1:59.32) and third in the 1000 yard freestyle (10:59.08).

Senior Timothy Valentine (Massapequa, NY / Chaminade) closed out the meet for Manhattan with a strong second-place showing in the 100 yard breaststroke, recording a marl of 59.32.

Earlier in the day, the men’s team was selected ninth in the MAAC Preseason Poll, while the women were slated 10th.

Kadish continued his strong weekend on at the NJIT Highlander Invitational to lead the way for the Manhattan Swimming & Diving teams.

One day after Kadish shattered the Manhattan school record for the three-meter dive, he also recorded a first-place finish in the one-meter dive with a score of 213.05.

Passamonte also was successful on the boards for the Jaspers, recording a first-place finish with a score of 209.65 in the three-meter dive.

Senior Matthew Broadmeadow (Seekonk, MA / Seekonk) capped the strong weekend for the drivers by taking third in the one-meter with a score of 174.90.

On the swimming side, Deiss recorded a second-place finish in 500 freestyle with a time of 4:46.09.

Manhattan notched scores of 174 on the Men’s side and 161 on the Woman’s side.

The Jaspers return to action against local rival Fordham in the ‘Battle of the Bronx’ on Friday, October 18 at 7:00 pm.