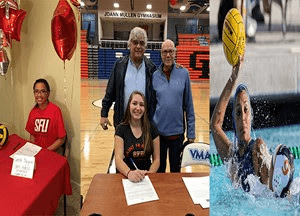 Saint Francis head water polo coach Pat Beemer is excited to announce the signing of Metztli Enriquez, Julia Kreidinger, and Camille Nguyen to the class of 2017.

Metztli Enriquez is a perimeter attacker from Atwater, California and El Capitan High School. She has starred for the Gauchos, making first-team all-conference each of the last three seasons and was named First-Team All-Section in 2015. She is coming off a season where she scored 48 goals and totaled 78 points in leading El Capitan to a 22-7 record. Enriquez has also helped the Gauchos to three league championships (2014-16) and a sectional title in 2016. She plans to major in chemistry at SFU.

“Metztli is a tremendous attacker with a strong, competitive resume, ” Beemer said. “She has a championship pedigree and is a strong addition to the program. ”

Julia Kreidinger is a two-meter defender from Erie, Pennsylvania and Villa Maria Academy. She starred for the Victor, earning three All-Conference honors including two First-Team appearances and was named First-Team All-State this season after a Second-Team All-State season a year ago. In her career Kreidinger scored 53 goals and assisted on 14 more. She recorded 55 steals, 20 blocks and drew 11 ejections. She helped Villa Maria to Western Conference Championships in both 2015 and 2016.

“Julia has the potential to be a great lock down defender for us at 2M,” Beemer said. “She will have an impact on the team right away.”

Camille Nguyen is an attacker/utility player from Mason, Ohio and Mason High School near Cincinnati. She has won numerous awards while playing for the Comets including: First-Team All State (2015, 2016), Second Team All-State (2014), Cincinnati Enquirer Player of the Year (2014-15), and MVP of the Ohio State Tournament (2015). She was selected to the USA Water Polo Olympic Development Team in 2015 and won the 2015 USA Water Polo Nick Johnson Inspiration Award. At Mason, Nguyen scored 290 goals and assisted on 79 more, had 297 steals and drew 85 ejections in her last two seasons. She helped Mason win the 2013 state title and is a two-time USA Water Polo Academic All-American. She plans on majoring in health science on the doctor of physical therapy track.

“Camille is a quick swimmer who will help a great deal in our transition game,” Beemer said. “She also brings the best nickname to our squad, Cam Jam”

Saint Francis will suit up for their first season this February. Their opening tournament is set for February 11-12 at Bucknell, the Red Flash will take on Claremont Mudd-Scripps at 10 a.m. on February 11th.