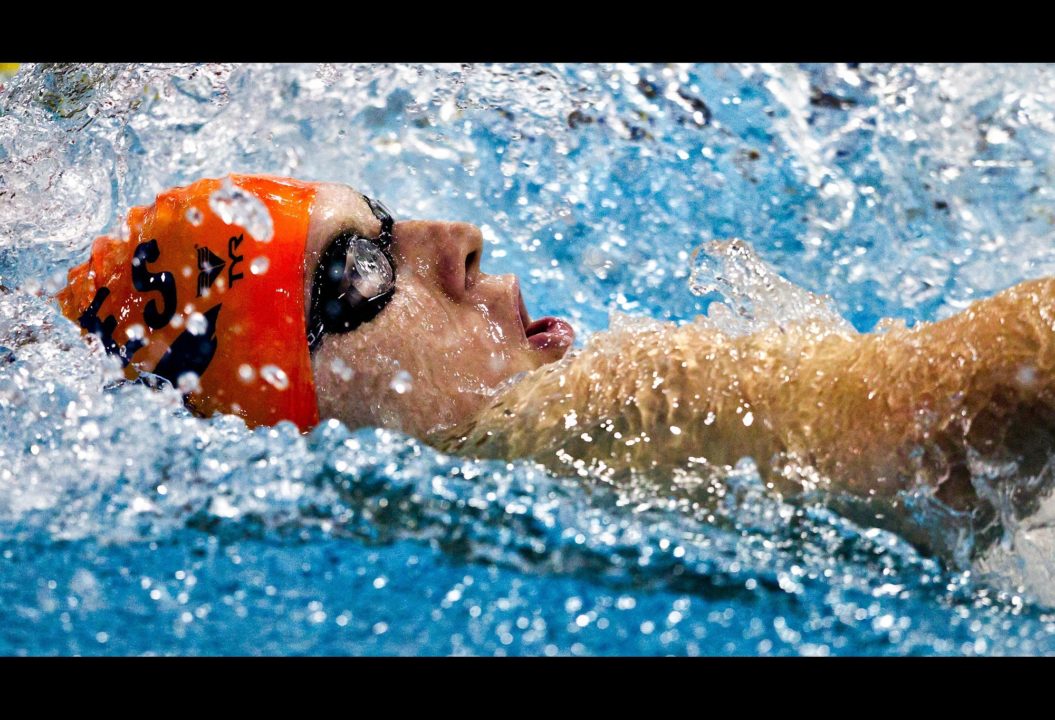 Ryan Murphy, of the Bolles School Sharks, broke the high school national record in the 100 backstroke at the Florida State High School Championships.

Murphy touched the wall in 45.34! And that was only his prelim swim! Among the high school ranks, David Nolan  (now at Stanford),  clocked 45.49 back in 2011 for Hershey High School in Pennslyvania.

Murphy is headed to Cal (UC Berkeley) next year to swim for Coach David Durden.

“I believe that the coaches and athletes at Cal will provide me with the most competitive training environment,” Murphy explained. “The coaches are amazing and the team shares my goals of being an Olympian”

Murphy, best known for his exploits as a backstroker, holds of 9 out of a possible 18 National Age Group Records (NAGR) in backstroke (and he only recently turned 17. Murphy’s going to swim faster and lower the 17-18 100 back NAGR a few times.

Last summer, Murphy wowed the crowd in Omaha by finishing 4th at the U.S. Olympic Trials in the 200 backstroker, cracking another one of Aaron Peirsol’s all-time bests.

Among the talent emerging after the 2012 London Olympic Games, Murphy and Jack Conger appear to have the most heat. Looking ahead to the 2013 FINA World Championship in Barcelona,  expect them to step up and shine.

Any way to get video??

The prelims and the finals are live and archived on fhsaa network.

Actually, I don’t find the prelims archived on this site. We’ll see.

http://sergiolopezmiro.com/ the vids of murphy’s swim and condorelli’s 100 are on there

Here is a link to Sergio’s blog and he has the videos on it: http://sergiolopezmiro.com/

Thank you Mel Stewart for the news! Incredible time for Ryan Murphy! But why doesn’t he wait for the finals to swim so fast? It will be tough to swim faster this evening. Perhaps he wanted to break that record in prelims because in finals he will have a relay before. Or he was just in control and he will swim 44.5 in final. We’ll see. This guy will dominate backstroke in the world like Aaron Peirsol has made it before. Under 53 next year in long course? Not impossible. Now Jack Conger has to respond to that.
Great swimming evening for me. I’ve made some researches and the finals of these Florida high school state championships are live… Read more »

their interview says they went for records in individual events in prelims and will try for relay records during finals.

Ok, thank you for the news. I’m not surprised by that.