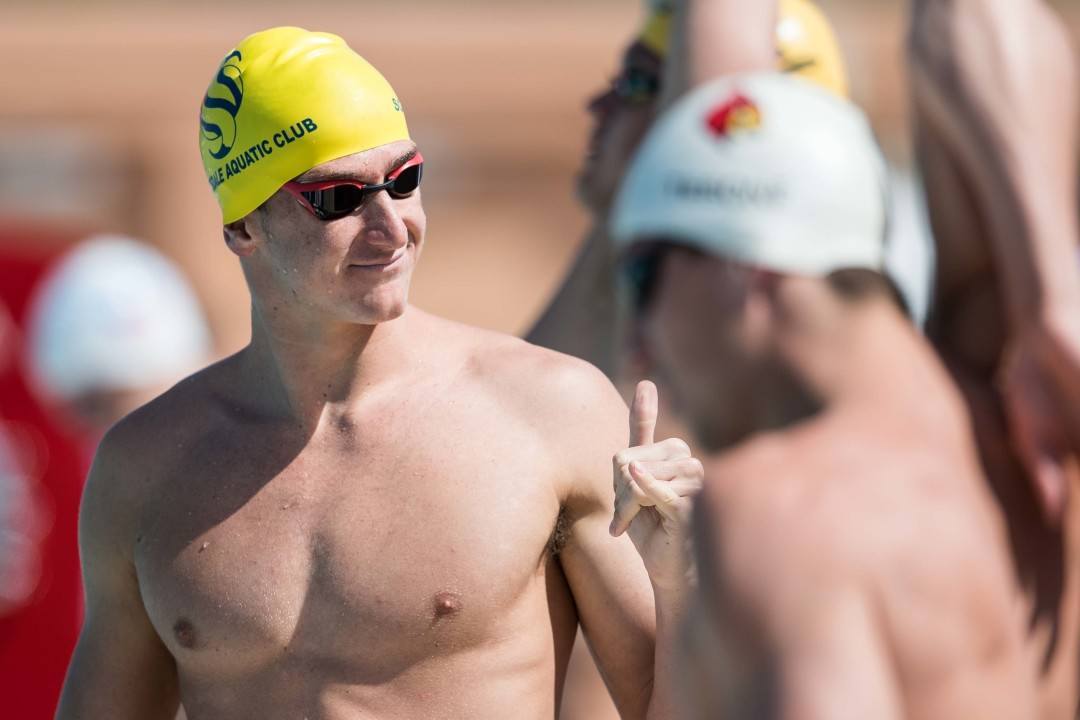 While SwimSwam has yet to officially unveil its rankings for the high school class of 2017, superstar sprinter Ryan Hoffer will... Archive photo via Mike Lewis/Ola Vista Photography

While SwimSwam has yet to officially unveil its rankings for the high school class of 2017, superstar sprinter Ryan Hoffer will undoubtedly be our number 1-ranked swimmer. Ahead of that officially being declared, however, he has already made his decision and has verbally committed to Cal on Thursday.

Excited to announce that I have verbally committed to swim for University of California Berkeley!#gobears pic.twitter.com/1SNnbSYdeN

That will fill a hole in Cal’s lineup that cost them a run at Texas and the NCAA team title last year, where they ultimately finished 2nd. While Cal was loaded with talent, including CSCAA Co-Swimmer of the Year Ryan Murphy, they lacked a sprint freestyle hammer to carry the team through.

Hoffer will bring that in spades, as he’s the second-fastest sprint freestyler to ever come out of high school after American and NCAA Record holder, and current Florida junior, Caeleb Dressel.

Hoffer’s best times in yards, along with where they would’ve placed at NCAAs last year, where relevant:

While it’s not entirely uncommon for female swimmers to come out of high school with A-final worthy times, for male swimmers, this is a very rare phenomenon. Hoffer, had he swum his best times at NCAAs last year, would’ve scored a monstrous 43 individual points. He could fill either the backstroke or butterfly spots on Cal’s medley relay, remembering that there’s a full year season to go before he arrives on campus and the aforementioned Murphy will be graduated.

That 100 free time, done at last year’s West 2015 Speedo Junior National Championships meet, lit the world on fire with his astonishing underwaters. The swim ranked him as the 6th-fastest 100 yard freestyle in history at any age, and he did it while only 17 years old. He would rank 2nd only to defending Olympic 100 free champion Nathan Adrian on Cal’s all-time rankings with that swim.

There are only a handful of male swimmers in history who can join a team that has placed in the top 2 at NCAAs for the last 7 consecutive years and immediately become one of their two-or-three most significant contributors, but that’s the kind of talent that Hoffer is.

Hoffer currently attends Chaparral High School and swims for the Scottsdale Aquatic Club in Arizona. His uncle Brian Hoffer was the head coach at the University of Missouri for 18 years until resigning in 2010.

And 5 years later, he went 3 for 3 individually and scored a perfect 60 points 👏🏽

How can this happen if coaches can’t talk to recruits until July 1?

As a junior you can approach a school and initiate conversations. Schools may reply. He can take his own time and visit with a coach and program. Official talks about things like scholarships can’t happen until July 1, I believe, doesn’t mean you cannot visit and see what the program has to offer. I imagine for his goals, tuition and fees really isn’t much of a factor.

Why would this commitment be a surprise — other than it’s very early. It’s not inconceivable that a swimmer would want to get a change of scenery out of the desert and compete for at top academic school and one with a shot at a national championship. I’d be curious what other schools Ryan considered – Stanford? USC? Texas? An SEC school? Perhaps staying at home and swimming for Bowman at ASU?

Who would win a SCY 100 Fly, Shields or Hoffer?

I have to wonder how much of an influence Eddie Reese’s remaining tenure has on recruits. Tough to follow one of the best coaches ever.

Is it too much to just say congrats Ryan can’t wait to see what your future holds?

He is just a kid, not even a high school senior as some of you have pointed out. Texas, Cal, Florida, NCSU…we are just lucky to have great schools and options for swimmers. The only person who knows which school is the best fit is the swimmer himself. No one can predict “where he would’ve gone faster” so I think we should all respect Ryan’s decision and root for him in the future!

Well this is certainly an interesting event. I tried resisting commenting but I simply can’t. I find it hard to believe so many people are this surprised by the decision. Hoffer wants to be at a competitive school that will win relays and national titles. Which is a fine reason, some people care about that more than others. Ryan Murphy- when he committed said that was big part and probably why he didn’t go to Florida. I am sure Schooling thought the same thing with Texas. Dressel easily could have done well with those two schools but stuck with Florida because it was the best fit. So those are some “schools” of though haha. NC State may be the “hot… Read more »

Arizona and Arizona St. are among the schools that are held in low esteem academically, interestingly enough.

Crap.. This will hurt Tecas and help Cal significantly for the team title….

I have to admit I don’t share the same optimism. I am a Cal fan, but predicting freshman year time drops is nearly impossible. Everybody thought Murphy vs. Conger would be the best college rivalry ever and he we are three years later and Conger has essentially abandoned backstroke. Seliskar was the clearly the better recruit over Haas, but did not drop nearly as much time as he did (both had great NCAAs, but both their friday events surprised me in terms of time).

Some people flourish freshman year, some people gain time their first year but rebound big time the next years.