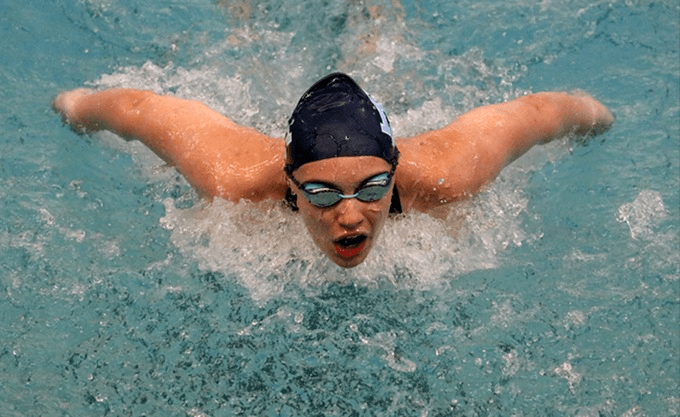 The Rhode Island women defeated UMass by a single point, 141-140, for their first win over them in 39 years. Archive photo via Shane Donaldson, Rhode Island Athletics

KINGSTON, R.I. – The University of Massachusetts women’s swimming and diving claimed seven individual event titles while Maja Boric won both the 1-Meter and 3-Meter dives as the Minutewomen fell to Rhode Island in a tightly contested meet, 141-140.

Boric continued her strong start to the season by winning her 11th and 12th straight appearances on the boards. The senior’s score of 297.00 led the way in the 1-Meter Dive before scoring 285.37 on the 3-Meter board to lead a one-two UMass finish. Maddie Doyle put together a runner-up performance in the 3-Meter while Beth Luther finished in fourth in both.

The Minutewomen swept both freestyle sprints, led by Kirsten Ardis’ time of 24.87 in the 50 Free as UMass picked up 16 points in the event. Emily Rudiman finished second in the 50 Free with Stephanie Judge in third before Rudiman went on to claim the top-spot in the 100 Free with a time of 53.39 followed by Judge in second and Kelsey Cordery in third.

Summer Pierce added a win for the Minutewomen with a swim of 2:10.37 in the 200 Fly followed by Olga Egkorova in third. Pierce also posted a third-place finish in the 100 Fly with Katie Mitchell’s runner-up time of 59.86 leading the way for UMass.

The Minutewomen are off next weekend before returning to the competition pool on Nov. 22-24 when they head to Boston, Mass. for the Terrier Invitational.

The Rams won the race in a time of 7:48.33, just .48 seconds ahead of the UMass contingent. The victory gave Rhode Island (6-0) its first victory over UMass since 1980, snapping a string of 18 losses in the series.

Rhode Island won eight of the 15 events, including multiple victories for freshmen Aimee Garcia and Julia Renna. Garcia won the 500-yard freestyle and 200-yard breaststroke, while also swimming the first leg of the 800-yard freestyle.

Renna opened the meet by swimming the first leg in the 400-yard medley relay victory. She later added wins in the 100- and 200-yard backstroke events.

What’s Next
The Rams are off for nearly two weeks before they are back at home for the annual Harold Anderson Invitational. The three-day meet begins Friday, Nov. 22.