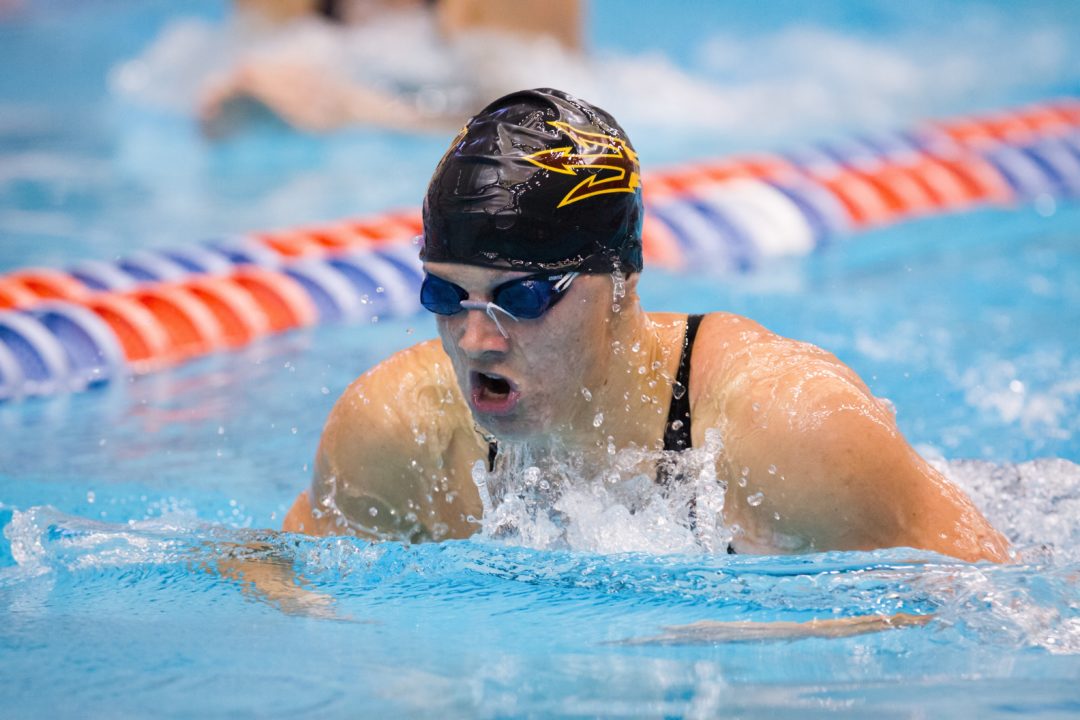 While the European Short Course Championships rage in France, there is still other swimming going on in Europe. With former...

While the European Short Course Championships rage in France, there is still other swimming going on in Europe. With former Arizona State Sun Devil Rebecca Ejdervik blockaded by a wall of breaststrokers ahead of her, she didn’t make the trip to Chartres, but instead swims at Sweden’s National Festival this weekend.

Since graduating from Arizona State, Ejdervik has spent time training with her old assistant Demarae Christensen at Auburn this past summer, and more recently in Miami with another former Auburn guy Aaron Ciarla. Perhaps a bit of work on the famed Auburn start was enough to push her over the edge and under the 30-second barrier. This is a swim a long-time-coming for a swimmer who has long been so good in the yards pool, but hasn’t quite found the international meet to break through a deep Swedish breaststroke group.

Meanwhile in Sweden, they today announced Ulrika Sandmark as the new coach of Sweden’s National Team and their new National Training Center which opens in Stockholm in January.

“It has been a relatively long process before all the pieces fell into place, but I am now very happy to present this coach who will be a strong addition to the Swedish Swimming Federation,” says Director Bengt Jönsson.

It is perhaps appropriate that Sweden has named a woman to head the national program where women clearly dominate the headlines with the likes of Therese Alshammar and Sarah Sjostrom. There are perhaps others, but Sandmark will now be the only female we can think of in the world to lead a major swimming country’s national program. She has previously been a head of Sweden’s Junior National Team as well.

Joining her staff at he National Center is Carl Jenner, a Brit by birth but who has lived in Sweden for 20 years. He has been the head coach of the aforementioned World Record holder Sarah Sjostrom for the last 5 years, including leading her emergence as one of the top swimmers in the world. The federation also brings in Russian coach Andrei Vorontsov, formerly the head of their National program as well as at Great Britain’s University of Bath. Vorontsov has had great success within the Russian program, though that success hasn’t necessarily shown up as much as they would have liked at the major meets.

This becomes an all-star training group that, combined with the exodus of Paulus Wildeboer from Denmark, could see a new hub for Northern European training (if the Swedes will allow foreign trainees into the group).

His name is Carl Jenner, right?