Ranomi Kromowidjojo Out of 2014 European Championships 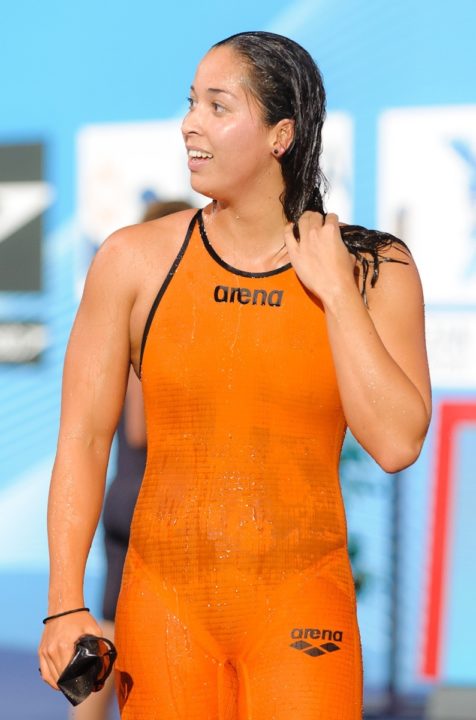 The Netherlands' Ranomi Kromowidjojo has decided, like many other of the world's sprinters, that her 2014 taper meet will be the World Short Course Championships. Archive photo via Victor Puig

Ranomi Kromowidjojo has pulled out of the 2014 European Championships, according to her federation’s website.

One of the continent’s top sprinters of the last decade, and the dual Olympic champion, will now go at least 8 years, since 2008, without a swim or a medal at the European long course Championships

“It has been a turbulent year and that cost me a lot of energy,” Kromowidjojo said in a statement in her native Dutch. “I want to invest in the next global tournament. There is a deep investment and an intensive training required. I am sorry that I have to pass on Euros for me and also for my teammates. My dream is to be in addition to the individual events also the relay to pursue in Kazan in 2015 (World Championships) and Rio 2016 (Olympics). “

According to Joop Alberda, the head coach of the Dutch Swimming Federation, “The conclusion is that it is better that Ranomi not go to the European Championship. She goes to start this summer with a new training program and focus on the Short Course World Championships in Doha in December 2014 and the Long Course World Championships in Kazan in 2015. This fits better in preparations on the road to Olympic success in Rio in 2016. It well as to “reset” after the recent period, and will bring renewed focus.

Kromowidjojo also missed the 2010 European Championships, the last full-participation, non-Olympic, long course version of this meet. That year, however, it was not by choice, rather it was by illness, but she still managed to dominate the sprint world in 2012.

This weekend, Kromowidjojo has already won the 50 free at the French Open in 24.53. Meanwhile, however, Sarah Sjostrom became the first woman under 24 seconds in the same up in Sweden.

While Kromoiwdjojo wouldn’t have been Sjostrom’s only contender in the 50 free, she would have been the primary one. That task now falls to Great Britain’s Fran Halsall and Denmark’s Jeanette Ottesen-Gray, who are both swimming exceedingly well this summer and might just be up to the task.

It is probably a good idea to pull out of the European Championships but I would recommend a lower level meet at the end of the summer to evaluate where her training is. It is very difficult to evaluate sprinters outside competition. Evaluation is critical.

It’s an interesting dilemma, when you’re going through a rough patch of training: Does she have anything to lose (except a race or two) by competing? Even if she doesn’t swim well, she’s crucial for the Dutch relays. It’s not like going to a swim meet is going to drastically throw off her training. On the other hand, maybe it’s not worth the psychological strain of swimming slow at a championship meet. Remember Michael Phelps at 2010 Pan Pacs? He seemed absent, he made excuses about how out of shape he was… and still beat 95% of the swimmers in the pool. That kind of experience can resonate through months of practice. Physically, it seems like swimming at Euros is… Read more »

I believe her concern is the length of a taper and the competition will interupt her training and she knows she needs hard, consistent, and uninterupted training at this point.