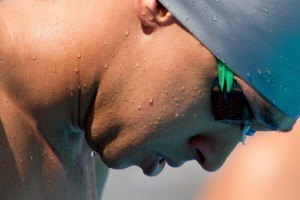 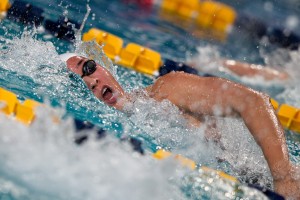 As reported by SwimSwam’s Jared Anderson:

After semifinals, we were on World Record watch in this race, but were watching the wrong swimmer. With reigning world record-holder Ruta Meilutyte swimming from the top-seeded lane, it was actually Jamaican Alia Atkinson who took the gold, and she did it by stunningly tying Meilutyte’s world record in the event.

Meilutyte led at the halfway mark, going out in 29.10, but Atkinson closed in a hurry, going by the Lithuanian to win by a tenth in 1:02.36. Meilutyte finished in 1:02.46 and the two will now share the world record in the race, with the meet record going to Atkinson.

So happy for Alia Atkinson. Congrats

That was an incredible race! And maybe the greatest reaction to a win ever? I can’t think of one better than this.

The shock on her face rivals Janet Evans’s reaction to her 400 free World Record at the ’88 Olympics in Seoul.