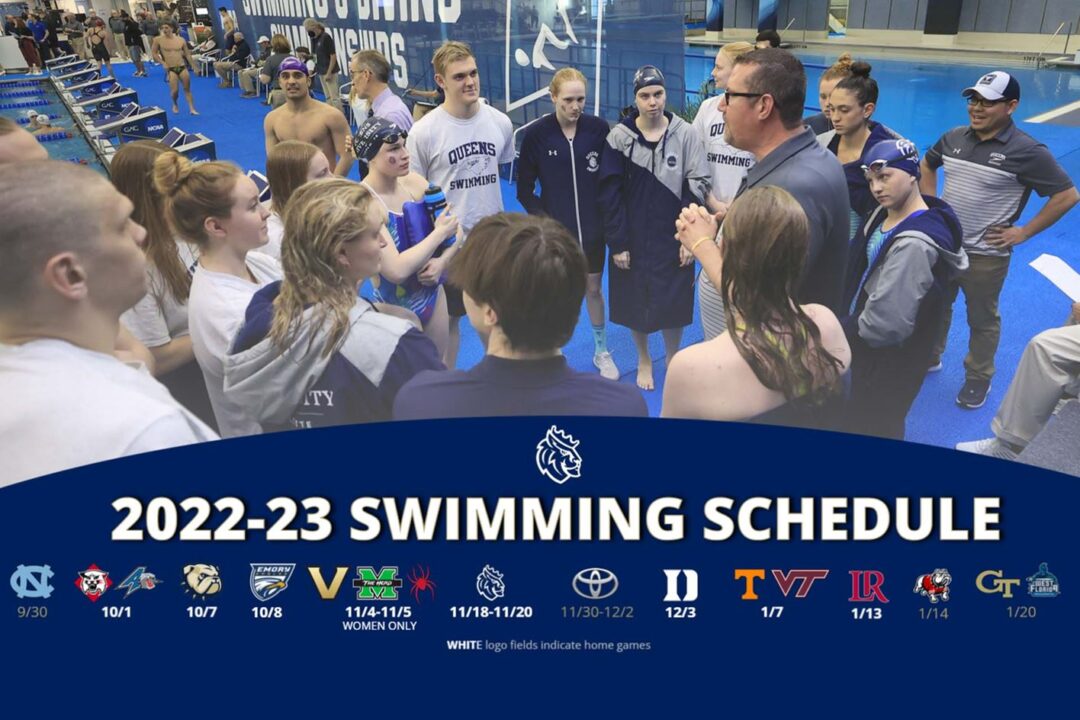 After winning seven straight Division II titles for both men and women, Queens is heading to Division I for the 2022-23 season. Current photo via Queens Athletics

CHARLOTTE, N.C. – Queens University of Charlotte associate athletic director for strategic planning and leadership development/director of swimming Jeff Dugdale has released schedules for the seven-time national champion men’s and women’s swimming programs. He does so with a new exciting challenge ahead: fully competing at the NCAA Division I level.

“We have a very tough schedule ahead of us” said head coach Jeff Dugdale. “We have scheduled the teams that we want to bench mark our progress against. We are excited to be joining the ASUN and its CCSA conference and look forward to putting ourselves in a position to compete from the start. I have really appreciated the support from the conference coaches and coaches across the country in our transition. I accept the challenge to put a bow on our DII campaign and now strategically build and be competitive at the DI level.

Queens will open the year with a Ring Ceremony to honor the 2021-22 championship-winning team on Friday, September 9. One week later, swimmers from the past and present will face off in the annual alumni/intrasquad challenge at the Levine Center.

The regular season will kick off with the Royals headed east to take on UNC Chapel Hill for the second-consecutive season. Last season, both squads put up notable efforts against the Tar Heels, with the men’s side narrowly being defeated by just 20 points, 141-121.

One day later, Queens will return home and commence the month of October with a dual meet, facing local Davidson College.

After a brief five-day break, the Royals’ women will compete in a two-day quad meet in their home pool, welcoming Vanderbilt, Richmond, and Marshall on November 5-6.

Coach Dugdale and his squad will enjoy nearly two weeks of rest, diving back into competition on November 18-20, as over 10 teams across all three divisions head into the Queen City for the annual “Fall Frenzy”; an event which saw the Royals take first place last season.

The Month of November will conclude in Greensboro, N.C, as swimmers will compete in the Toyota Open, which is a long-course meter competition and will consist of hundreds of student-athletes attempting to qualify for the Olympic trials.

Queens’ stamina will certainly be tested, as it returns home the next day to compete in a dual meet with Duke on December 3, the team’s last competition of 2022.

The run of power-five competition continues early in 2023, as Tennessee and Virginia Tech will enter the Levine Center for a one-day meet on January 7. “We will continue to challenge ourselves in both the ACC and SEC and throughout the A10 and ASUN to ensure we are challenging ourselves to compete at the highest level”.

One week later, the final home matchup of the season will take place on January 13 against Lenoir-Rhyne, with the squad heading to Gardner-Webb the day after.

Regular-season contests will conclude with the Royals heading to the Peach State to compete against Georgia Tech and West Florida.

The season will conclude with the National Invitational Championship (NIC), as swimmers who achieved B-Cut times will face off.

The full schedule can be viewed here.

I think they’ve got the meet against the Toyota in the bag. It’ll probably just sink.