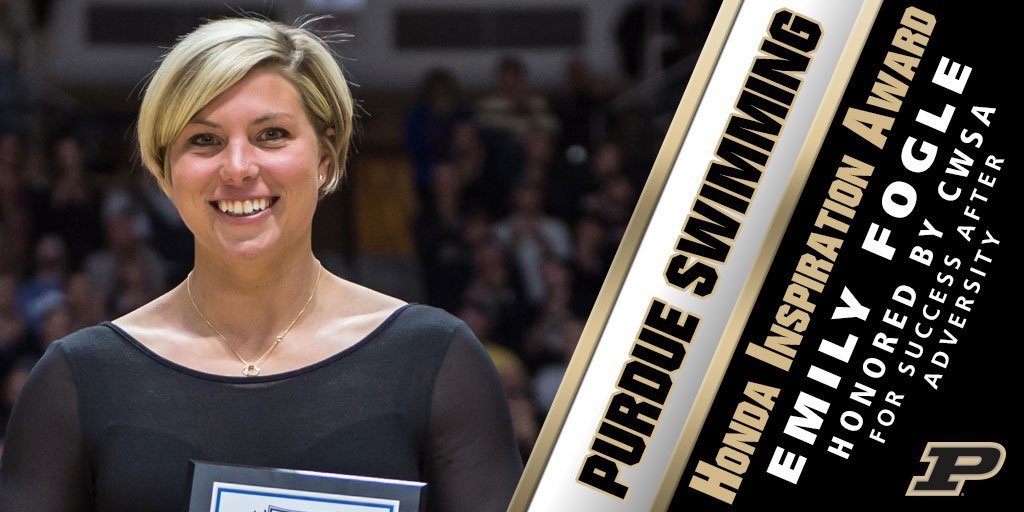 WEST LAFAYETTE, Ind. — Purdue All-American swimmer Emily Fogle has been selected as the recipient of the 2016 Honda Inspiration Award, the fourth prestigious individual honor she has received since the end of the 2014-15 season.

Presented by the Collegiate Women Sports Awards (CWSA), the Honda Inspiration Award has been given to a deserving female collegiate student-athlete for the past 28 years who has experienced extraordinary physical and/or emotional adversity, injury and/or illness, or experienced extraordinary personal sacrifice during her career and yet returned to athletic success. Finalists for the 2016 award also included University of Georgia gymnast Morgan Reynolds and Salisbury University field hockey player Breck Sullivan.

Fogle’s inspiring story will be highlighted during the live CBS Sports Network telecast of the 2016 Honda Cup presentation and 40th anniversary celebration at 9 p.m. ET on Monday, June 27. Unfortunately, Fogle will be unable to attend the ceremony in Los Angeles because she is scheduled to compete at the U.S. Olympic Team Trials in Omaha.

“It is a tremendous honor to be recognized as the 2016 Honda Inspiration Award winner by the Collegiate Women Sports Awards,” Fogle said. “To be recognized among such inspirational and motivational student-athletes, like the other finalists Morgan and Breck, is quite a humbling experience. The trauma that I experienced during my six years at Purdue University will stay with me forever. However, the way in which I was able to overcome the adversity is largely thanks to the coaches, student-athletes, doctors, and administrators that never gave up on me, even when I gave up on myself.”

Fogle overcame multiple hip surgeries and an extended bout with anorexia nervosa brought on in part by the unexpected death of her mother in the spring of 2013. After missing almost two full collegiate seasons of competition, she returned to action in the summer of 2014 and again qualified for the NCAA Championships in 2015 and 2016. She finished her Purdue career as a five-time All-American and the owner of five program records.

Dating back to May 2015, Fogle has also been recognized for her perseverance with the N4A Wilma Rudolph Student-Athlete Achievement Award, the Haier Achievement Award and the Brady Comeback Scholarship Award.

“Emily is a remarkable young lady who has shown tremendous resilience during her time as a Boilermaker,” Purdue head coach John Klinge said. “The success she enjoyed after overcoming the injuries and adversity that she endured speaks to the attitude and work ethic she displayed every day while leading our team.”

Former Purdue women’s basketball player Drey Mingo (2010-13) was also honored with the 2013 Honda Inspiration Award. Mingo overcame a case of bacterial meningitis and the accompanying hearing loss during her junior year (2010-11). In the fall of the following season, she suffered a torn ACL in her right knee that sidelined her for all of the 2011-12 campaign. As a sixth-year senior, Mingo led the Boilermakers to the 2013 Big Ten Tournament title and the second round of the NCAA Tournament.

Already a three-time All-American and program record holder in three individual events who had competed at the U.S. Olympic Team Trials entering her junior season, Fogle learned in the fall of 2012 she would need to have surgery on the labrum in her hip. It turned out to be the first of three surgical procedures she would have on her hips. The initial stages of depression had already begun after the first surgery and it only intensified when her mother passed away unexpectedly in the spring of 2013. With the aid of professional help and the continued encouragement from her Purdue coaches and support staff, Fogle overcame her bout with anorexia and rehabilitated from her surgeries, returning as a full-time student in the fall of 2014.

During the 2015-16 college season, Fogle broke her own Purdue records in both breaststroke events yet again and joined an elite list of Boilermakers to be four-time NCAA Championships qualifiers. At the national championship meet, she took eighth in the 100 breast to become Purdue’s first female swimmer since 2010 to earn full-fledged All-America honors. She was also an Honorable Mention All-American in the 200 breast.

Fogle completed her bachelor’s degree during the 2014-15 school year and was enrolled in graduate course work this season. She plans to pursue a master’s program and career in clinical social work after closing out her swimming career at the Olympic Trials this summer.

The CWSA, celebrating its 40th year, honors the nation’s top NCAA women athletes, recognizing superior athletic skills, leadership, academic excellence and eagerness to participate in community service. Since commencing its sponsorship thirty years ago in 1986, Honda has provided more than $3.0 million in institutional grants to the universities of the award winners and nominees to support women’s athletics programs at the institutions.