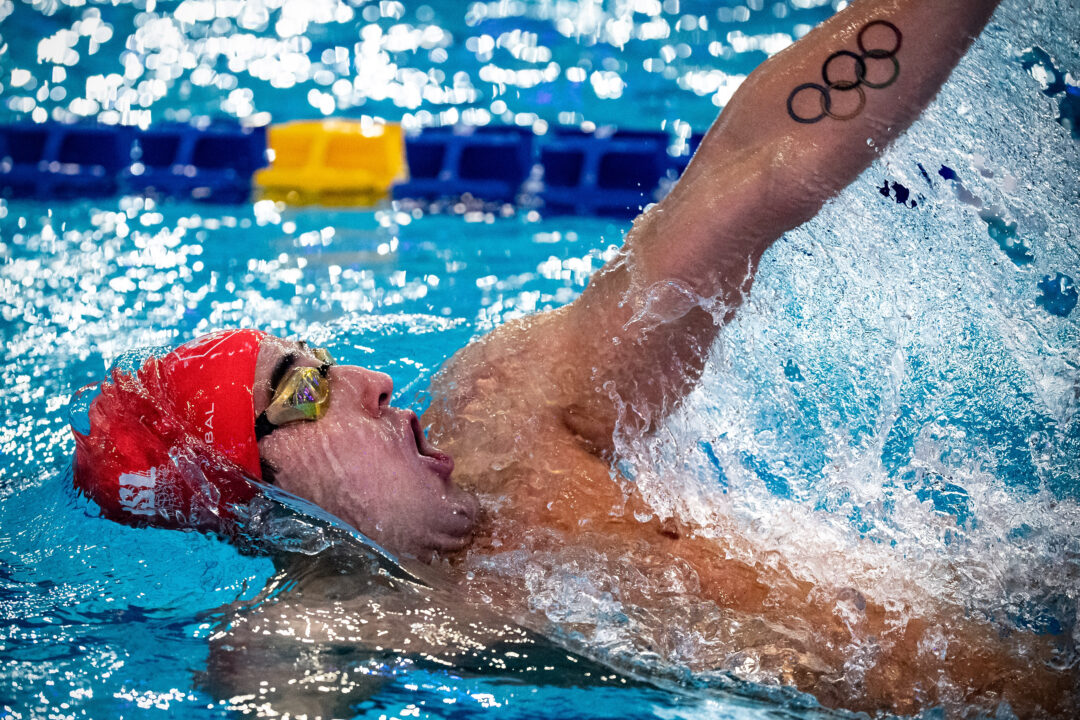 Pebley and Groves spoke out in support of trans inclusion, while Gabby DeLoof says it's not fair for trans women to compete against biological females. Archive photo via Giorgio Scala / Deepbluemedia / Insidefoto

A pair of Olympians and current professional swimmers have spoken up in support of Lia Thomas in the ongoing debate of whether or not trans women should be allowed to compete against biological females in athletics.

2016 U.S. Olympian Jacob Pebley and two-time Australian Olympic medalist Madeline Groves became the first current pros to speak out in support of Thomas publicly on Wednesday, with Pebley posting a statement on Instagram and Groves giving her opinion over a series of IG Stories.

Thomas, a trans woman, competed on the University of Pennsylvania men’s team for three seasons before transitioning over a two-year period before beginning to race as a woman in 2021-22.

Pebley, 28, criticized those who have been normalizing discrimination in the debate, and pointed to the high suicide rate among the trans community as a reason to have empathy towards the psychological disadvantages someone like Thomas must be experiencing.

Pebley was open about the mental health struggles he’s had in the past, which led him to forgo competing at the 2021 U.S. Olympic Trials.

“First of all, I don’t think it is brave to normalize discrimination. Veiling discrimination of a minority party with empathy and ‘understanding’ is never going to be tolerated in my book,” Pebley said. “If we really understood what Lia and many other trans people are feeling we wouldn’t be making posts that essentially read as ‘I hear you but you can’t play with us.’

“At the very least you should be providing some feedback towards changing the rule you are in disagreement with and directing at the governing bodies that can change those rules.

“The second and more important part is mental health. As someone who has struggled with mental health, I, like many others, have said the cruelest things about myself and have gotten near taking my own life. The trans community has an extremely high suicide rate because of discrimination like what is going on within the swimming community.

“I shudder to think what Lia is not only thinking about herself but also all the young trans swimmers seeing their role models advocate for excluding them from competing in alignment with their identity. If you think the psychological advantage is so great, I urge you to consider the psychological disadvantage she and many others are facing currently.

“Long story short, in athletics, the playing field is never fair. Lia isn’t breaking any rules so please treat her and the entire trans community with more respect next time you want to be public about your opinion because it has much greater consequences than points on a scoreboard.”

Groves, who also opted not to compete for a spot on her nation’s Olympic team last year and later revealed in December that someone still working in swimming molested her, posted a series of Instagram Stories responding to comments on a post from Schuyler Bailar, who was the first trans male to compete at the NCAA Division I level as a swimmer with Harvard back in 2015.

Comments have since been removed on the post, entitled “Trans Athletes Belong In Sport,” but Groves posted the following comments on her Stories:

“It’s so sad to me to see apparently educated people use their platform to post transphobic dribble – what the f*** gives you the right to decide who can play sport? Athletes are traditionally self-centered but using bigotry to justify excluding an entire group of people from sport is just disgusting.

“If you’re too threatened to compete alongside trans women, you’re a selfish coward that probs wasn’t that good at sport in the first place.”

On the other side of the discussion, pro swimmer Gabby DeLoof posted a statement on Instagram echoing the sentiment Erika Brown put forth last week, saying that, while she supports the LGBTQ+ community, “we cannot allow transgender females to compete against biological women.”

The post received positive comments from Brown, along with Gabby’s sisters, Ali and Catie, who are also currently professional swimmers and former members of the University of Michigan Wolverines in the NCAA.

“I want to share something that has been on my mind regarding women in sport. I have muted my voice out of fear of what others would do and say about me and how it would impact my stance as a professional swimmer. But, I am no longer allowing myself to sit back and not stand up for what I believe in.

“First, I want to say that I support the LGBTQ+ community and that we are all God’s children, called to love another. I am not creating any hate, only speaking up for what is right.

“We cannot allow transgender females to compete against biological women. A biological male goes through male puberty, thus developing the physiology of a male. According to Forbes, “the trans women’s strength, lean body mass and muscle were still greater than the levels found in cisgender women, even after 36 months on testosterone blocks” (Elsesser, 2021).

“I believe sport is a great part of someone’s life and I firmly believe all transgender females can compete in sport, just not against biological women.

“It is time to start standing up for women’s sports before we lose what so many before us have fought for. I hope this message can help inspire others to speak up for what is right.”

The NCAA’s transgender policy allows trans women to compete on a women’s team if they’ve completed a minimum of one year of testosterone suppression treatment. Thomas has been undergoing treatment for the last two and a half years.

Quick question: Did Lia fully transition (surgery) or is she merely taking testosterone blockers? Thank you.

NCAA does not require surgery and as indelicate as it is to say, pictures of Thomas do not suggest there’s been any surgery. NCAA also does not have specific hormone or testosterone suppression requirements, just assessment by a review panel which is supposed to include a WPATH-affiliated medical professional (WPATH = World Professional Association for Transgender Health, ie. not an unbiased panel member).

Genuinely asking, perhaps naively, but can someone explain to me the reason why our sporting competitions are dichotomized along gender lines, a well recognized and respected psychological construct of personal identify, and not based on sex, as determined by biology and differences in which cellular processes undergo physical change and maturation? Is this all down to the language used in the legal space before we really had as nuanced an understanding of the differences between gender and sex?

The fact this is primarily a womens issue seems to have got lost. All of our opinions are of value, but remember this is first and foremost a womens issue. I’ve seen a few too many of my fellow gays (and other non-trans LGBT identifying people) wading in with a declaration of their identity like we’re at the centre of this and our opinions are worth more, when 99% of us will be personally unaffected.

Yes, I was making that point elsewhere as well.

honest question here – I don’t know enough about medical process for transgender and also not a competitive athlete.

is it a correct assumption that transgender male would not post the same impact to men’s sports even with the added testosterone during transmasculine hormone therapy? In other words – if a trans male gone through puberty as female, even with increase testosterone during transition, it is still not making trans male equivalent to cis male in terms of body and muscle built for sport achievements. Is that a correct assumption?

just trying to understand what may be an acceptable solution for Lia and other trans female athletes, as well as trans male athletes. Will it be better to allow all… Read more »

Thank you, Gabby. I hope your bravery encourages many more. Your voice was lost in this article and these comments like so many women before. You spoke as a professional and respected member of the swim community directly impacted by these discussions. The little attention your bravery received has not gone unnoticed by many of us. It is voices like yours that are necessary. Thank you.

I just hope everyone has fun