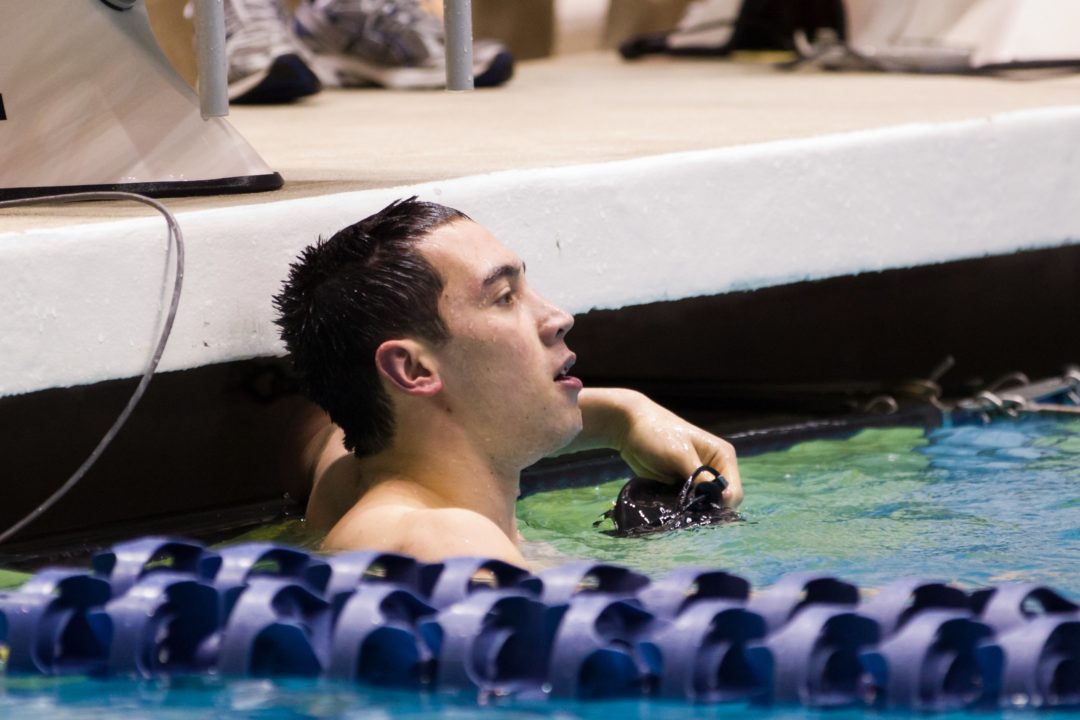 Princeton graduates a big class, including All-American Jon Christensen, but they bring in a class that will quickly help Tigers fans recover. (Photo Courtesy: ©Tim Binning/TheSwimPictures.com)

The Princeton men are graduating one of their most successful classes in recent history (probably ranking behind only the class of ’09 in the last decade), including All-American breaststroker Jon Christensen. The class of 12 went undefeated with four-straight Ivy League titles.

But their latest class appears as though it could hold some potential future All-Americans, and certainly some future All-Ivy swimmers in the least. The class of 14 already has 6 swimmers with Olympic Trials Qualifying Times (though some are internationals), adding to the 9 returning swimmers that have the same, and really builds this program up for a bright future.

This class is so rich with talent, that it’s hard to find a fair starting point. We’ll begin with the group of massively-talented breaststrokers that shouldn’t take too long to fill-in for Christensen’s available spot, beginning with Bolles School’s Teo D’Alessandro. His versatility will make him a rock for this class in the future; he’s a 1:38 200 freestyler, a 1:47.2 in the 200 IM; and a 3:53 in the 400 IM.

D’Alessandro is very versatile, but he won’t necessarily have to carry the breaststroke load in this class. That’s because he has a very focused classmate in Jack Pohlmann from the Dayton Raiders club in Ohio, who is the defending state champion in the 100 with a 55.27. He’s also got a 2:00.15 in the 200. Both of those times would already put him on the Tigers’ all-time top-10 list.

Byron Sanborn from Palo Alto (and the famed PASA team and Palo Alto High) is very similar to D’Alessandro in his skill-set. He brings another 55.2 in the 100 breaststroke, a sub-two minute 200 breast, and a 1:47 in the 200 IM. He is less likely to end up as a free-relay anchor than D’Alessandro is (he has a 45.6 best in the 100), but  is still an outstanding prospect.

Aside from D’Alessandro, the other swimmer who is on the verge of legitimate national-level relevance is Marco Bove, an Italian National who trains with the Mission Viejo Nadadores. He’s a three-time Italian Junior National Champion in the 200 fly, with a best of 2:01.93 in long course. He doesn’t have much in the way of yards results, but that time ranks him in the elite group of the class of 2012. He’s also got a 2:05.0 in long course in the 200 IM.

Brooks Powell will bring another big relay piece to town; out of Kingwood Park High School in Houston, he’s the three-time defending Texas 4A State Champion in the 50 free, with a best of 20.28. Given that he’s also been a 49.3 in the 100 fly, his 45,5 best in the 100 free has to be short of his full potential.

In summary, this class is stacked. They have at least half-a-dozen State Champions. At least 6 guys who go 45-mid’s or better in the 100 free. It’s a balanced class, with at least one of everything. When this group is added to the young team returning, the Tigers look like they could start to challenge the big-conference teams for top 20 spots at NCAA’s in the next two-to-three years. This group of freshman will join next year’s sophomores including Harrison Wagner who already went a 19.6 in the 50 free, and Michael Strand, who already has a 47.6 in the 100 fly.

A full summary of the team’s star recruits is below:

Before Princeton – three-time Italian Junior National champion in the 200 fly … earned one silver and one bronze in 100 fly and one silver in 200 IM … reached ‘A’ finals at Italian Senior Nationals … Would hold three US Olympic Trials cuts in 200 fly, 200 IM and 400 IM … competed in U.S. Junior Nationals.

The princeton swimmers to really watch are connor mahr (sp?)and conner jager. jager dropped massive amounts this year at HYP meet and mahr didnt swim ivy meet but swam great being tired the whole year. expect him to be biggest contributor. also strand is backstroke (ncaa 47.0) but switched to fly to fill void (20.6 fly fill in…). incoming class is unbelievably deep but some of them need to step up and become all-stars. my pick is en-wei hu van wright. i just love the name. harvard has an impressive class too – we will see how they take shape once on campus. i also wonder how both H and P get so many top level swimmers in through admissions… Read more »

Check this out and you’ll find part of the answer:

http://www.nytimes.com/2011/12/25/sports/before-athletic-recruiting-in-the-ivy-league-some-math.html?pagewanted=all
I believe the working rule for swimmers is a bit higher and obviously it varies from the elite two (H and P) and the other six.
Re financial aid…there have been many articles on how Harvard and Princeton can almost compete with scholarship schools with aid….especially since so few swimmers can “full rides”….this is one of the reasons that the depth of quality swimming is fast improving in the Ivy Leagues and half the league at least one representative at NCAAs.

Sorry for the typos…Brown, Harvard, Princeton and Penn sent swimmers to NCAAs. Depth refers to the times required to make finals which has improved greatly over the past few years.
Great education, good swimming and generous aid packages are big draws for swimmers who are accomplished in the pool and in the classroom.

Are they swimming yards in July???

they had time trials in yards

But will d’alessandro be able to keep up with the Tigers’ new star, Andrew Helber, in the backstroke events??? Rumor has it Helber has been training all summer to make his NCAA cut at Princeton’s scrimmage against FAU this October.

Princeton lost about 250 points to graduation. The new kids will really have to step up to retain the Ivy title. Go Tigers!