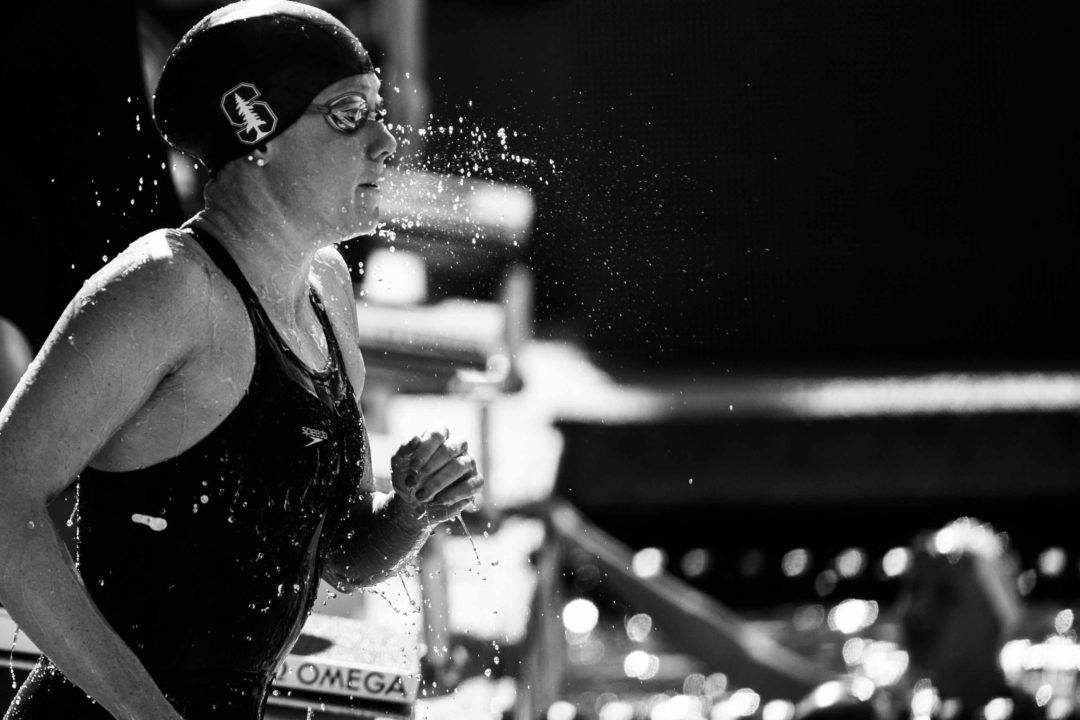 Ella Eastin will be among the Stanford women's contingent heading to the Ohio State Invitational this weekend. Archive photo via Mike Lewis/Ola Vista Photography

We saw some incredibly fast swimming last weekend at the ACC vs Big Ten College Challenge in West Lafayette, and it will continue this weekend as the first set of mid-season invites will go off.

The Ohio State Invite will be missing last year’s men’s winner in NC State, who will be at the IU Invitational, but will get back the 2016 women’s champs (and two-time defending NCAA champs) in Stanford, who competed at the Art Adamson Invite in 2017.

In addition to the Stanford women, the meet will include hosts Ohio State, Kentucky (whose women won the meet last year), and West Virginia. Check out all teams competing below:

STANFORD WOMEN READY TO THROW DOWN

The Stanford women’s team has yet to rest for a meet so far this season, and while we obviously don’t expect a full taper, they should be fast. None of their swimmers have hit a time this year that would’ve qualified for last year’s NCAAs (32 women have done so), and we certainly won’t be able to say the same thing next week.

Taylor Ruck will be making her invitational debut here, along with the rest of Stanford’s stacked freshman class. What Ruck’s event lineup would be come championship season was a big question coming into this year, and she really hasn’t made things any clearer this weekend with six individual entries. The two-time Olympic medalist is set to compete in the 50, 100, 200 and 500 freestyle, and the 100 and 200 backstroke (her 500 entry is listed as exhibition).

Notre Dame sophomore Zach Yeadon is one of a number of swimmers (many of them at the IU Invite) swimming in back-to-back multi-day meets shortly after swimming the ACC/Big Ten College Challenge last weekend. He had a very impressive performance there, putting up the #2 time in the nation in both the 500 (4:13.68) and 1000 freestyle (8:51.97). Both swims were within a second of his personal best (4:12.74, 8:51.16), and his 500 performance made him one of just eleven men to hit a time that would’ve qualified for last season’s NCAA Championships.

OTHERS TO WATCH FOR

Leading the charge for the Kentucky women will be the backstroking trio of Asia Seidt, Bridgette Alexander and Ali Galyer, who all scored in the 200 at NCAAs last year. Seidt, who was 2nd in that event, also scored in the 200 IM (7th) and 100 back (9th). Also highlighting their team will be sophomore breaststroker Bailey Bonnett, who comes in seeded 2nd and 3rd overall in the 100 and 200 respectively.

Others expected to make an impact include Ohio State’s Kristen Romano and Molly Kowal, and Notre Dame’s Abbie Dolan. All three are coming off very solid showings at the ACC/Big Ten Challenge. The field also includes Meg Bailey and Aliena Schmidtke, who are swimming unattached. Both are OSU post-grads, with Bailey finishing up her senior year in February with a 7th place finish in the 400 IM at NCAAs.

Men to keep an eye on include Ruslan Gaziev and Nick Hogsed of Ohio State, Marci Barta and Jack Montesi of Notre Dame, and Samy Helmbacher of Pittsburgh. All five of them are coming off the ACC/Big Ten College Challenge as well. Another swimmer on the radar is WVU freshman David Dixon, who produced a very impressive 1:43.8 200 fly in October.

All of the livestream links can be found here: http://ohiostatebuckeyes.com/ohio-state-invitational/
It will be on streamed on BTN2GO.