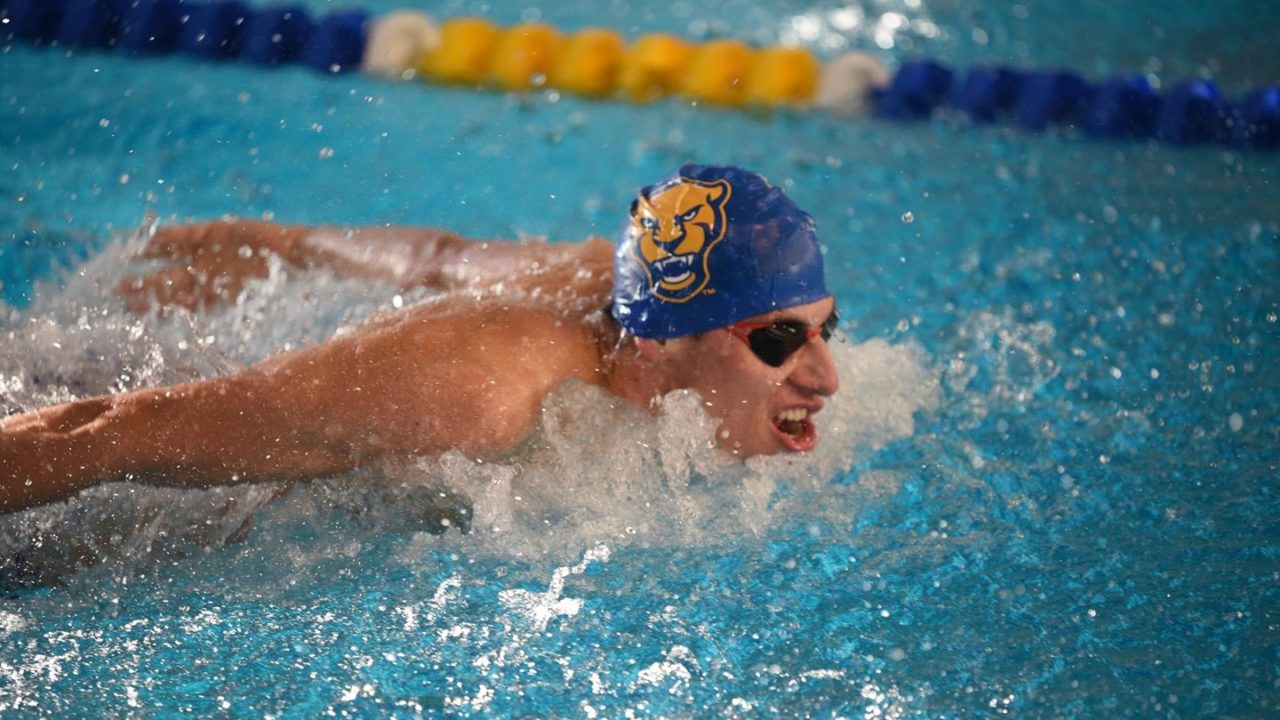 Pitt junior swimmer Blaise Vera posted the most notable performance of the day, easily winning the 100-meter freestyle with a time of 50.10—a mark good enough to qualify him in the event for the 2020 USA Swimming Olympic Team Trials in June in Omaha, Neb.

“It was really fun to see Blaise get his United States Olympic Trials cut today,” Pitt head coach John Hargis said after the meet. “With where we’re at in our training, we had some good swims today, but also some not-so-good swims. We were sloppy in some events. It’s October, we’re training really hard and our freshmen showed for the first time just how tired they are.

“For the most part, we raced and competed well though,” Hargis added. “It was a fun competition. To get a long-course meters meet in during an Olympic year was something that we wanted to do. We’ll now look forward to heading up to Michigan State next Friday and try to win there.”

While Vera’s 100 Free time certainly highlighted the day, several other Panthers also emerged victorious from the pool after swimming the LCM format, a departure from the short-course yards system that is predominant in collegiate swimming.

The Panthers will head to Michigan State for their first traditional head-to-head dual meet of the season next Friday night. Pitt will face the Big Ten program at 4 p.m. in East Lansing, Mich.

PITTSBURGH – The Duquesne swimming and diving team opened the 2019-20 campaign on Saturday with a long course meters meet hosted by Pitt with Villanova and Youngstown State at Trees Pool.

Lauren Devorace (Rocky River, Ohio / Rocky River) paced the 400-meter free with a school-record performance of 4:31.76 for the Dukes.

Summer Svitavsky (Willoughby, Ohio / Hawken) also set a school record in the 800 free with a mark of 9:25.68, good for second place on the day.

Kuhn added a second-place mark in the 100-meter breaststroke while Clare Flanagan (Allison Park, Pa. / Hampton) placed third in the 100 back with a time of 1:08.20

Head coach David Sheets: “I was pretty pleased with the way the ladies performed today at Pitt especially considering they raced less than 24 hours earlier in the Pentathlon. However, putting them in those kinds of situations will help us prepare for down the road. We also got a glimpse of what our freshman can do and the things we are going to have to work on for them to grow and develop over the course of the season.  I am optimistic we are on the right path but we will have to keep improving on a daily basis.”

NEXT UP
The Dukes head to Richmond for the Richmond Duals next Friday, Oct. 18 and Saturday, Oct. 19. Duquesne squares off with the host Spiders on Friday at 4:30 p.m.

PITTSBURGH, Pa. – The men and women’s swimming and diving teams hit the road for their season opener, traveling to Pittsburgh on October 12 to take on the Panther, Duquesne and Youngstown State. The Wildcats won six total events — four on the women’s side and two on the men’s.

Villanova took home first in the 200 butterfly thanks to Kelly Montesi.  The sophomore completed the event in 2:20.22, just .3 seconds faster than the next finisher. She also finished first in the 100 butterfly with a time of 1:03.09.

Taking first in the 100 freestyle was Millicent Routledge, who finished in 58.86. Finishing second was Abby Beloco, who swam 59.37. The Wildcats finished with the top time in the 400 freestyle relay with 3:59.30 behind the group of Rutledge, Berloco, Gracie Wielar and Anna Turner.

Overall, the Wildcats had 26 top-three finishes on the day in 24 of the 32 events.

The men’s and women’s teams will be back in action on Sat. Nov. 2 when they host Georgetown for a 1:00 P.M start.

Pittsburgh, Pa. – The Youngstown State men’s and women’s swimming and diving were in action on Saturday against Pittsburgh, Villanova and Duquesne at Trees Pool.

Mallory Pitstick had a fifth-place finish in the 200-meter breaststroke with a time of 2:52.88. In the one-meter dive, Tess Weiskopf was sixth with a score of 234.20 points.

The Penguins are next in action on Saturday when they play host to Toledo at 3 p.m.