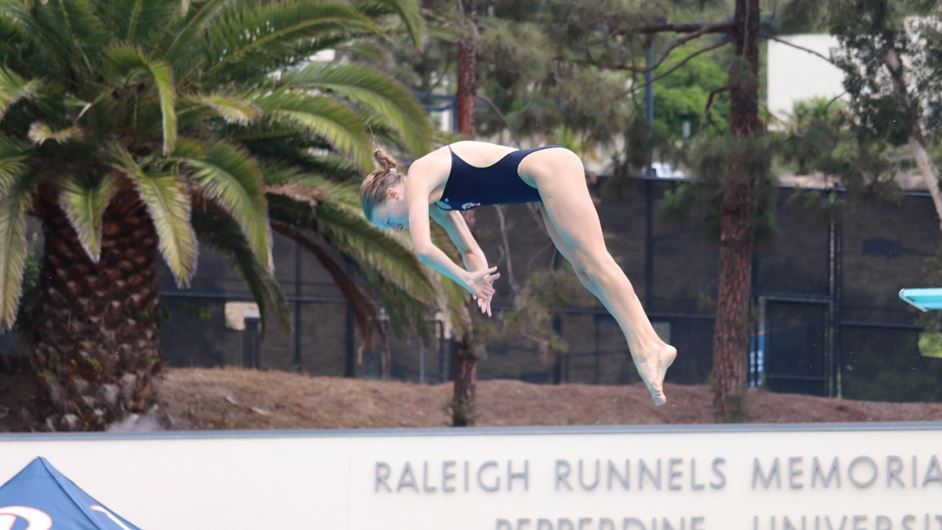 Pepperdine's Kara Coughlin was named the PCSC Swimmer of the Week while Lexie Martin was honored as the PCSC Diver of the Week. Current photo via Pepperdine Athletics

MALIBU, California – The Pepperdine women’s swimming and diving team earned its fourth and fifth weekly Pacific Collegiate Swim Conference awards this season, as swimmer Kara Coughlin was named the PCSC Swimmer of the Week while diver Lexie Martin was honored as the PCSC Diver of the Week by the league on Tuesday afternoon. This is the second time this season that the Waves have earned both swimmer and diver of the week.

Coughlin (Evergreen, Colo./Evergreen HS) was a top performer for Pepperdine at the Trailblazer Invite. In the 200 back (2:03.47) she set a season-best time which is also the top time in the PCSC. Participating in the 200 medley relay, Coughlin swam a split time of 27.29, also a PCSC best. This is Coughlin’s first weekly this season.

Martin (Keller, Texas/Keller HS) finished in the top five in two events at the Trailblazer Invite. The freshman scored second in the 3 meter (212.80) and fourth in the 1 meter (216.20), leading the way for the Waves. Martin currently sits in the top five for both events in the PCSC. This is Martin’s second weekly honor this season.

The Waves will be off until a dual meet at San Diego State on January 8.