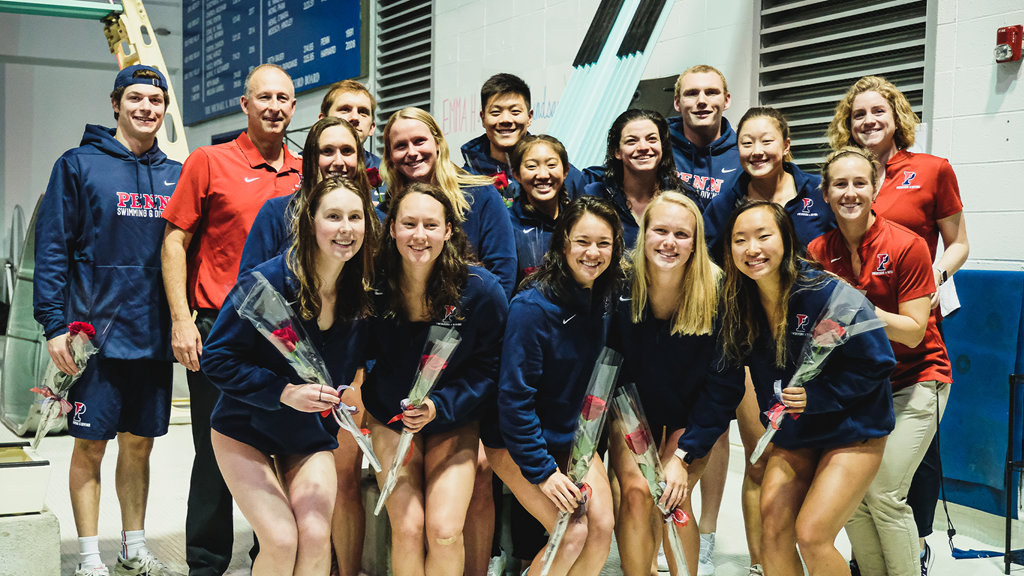 PHILADELPHIA – The University of Pennsylvania swimming and diving programs wrapped up the regular season with a dominating sweep against West Chester. The men’s team dominated, winning 12 of 16 events for a 183-106 victory. The women similarly reigned, with 11 first-place finishes in 16 events for a 177-116 victory.

The meet closed out the regular season for Penn. The Quakers now shift their preparations solely to the Ivy League Championships later this month.

Larusso made her case for another bid to the Ivy League Championships by winning the 100 and 200 back. She and Lindsay pierce both sprinted to a season-best time of 56.51 to tie for first in the 100 back. Larusso won the 200 back, touching the wall in 2:00.71 for her second victory of the day.

In what had been a sentimental meet for many, the Quakers closed things out in historic fashion. A relay team consisting of three seniors—Mollie Westrick, Meredith Newman, and Emily Layne—and one freshman—Margot Kaczorowski—set a pool record in the 200 free relay. Until their record is beaten, they will be immortalized on the eastern wall of Sheerr Pool with their time of 1:33.13.

Recapping the Penn Men
The Quakers wrapped up the regular season in style, as ten swimmers tallied 12 event victories. The depth across classes showed, with each class representing two or more of Penn’s individual victories.

CJ Hinckley started the individual events with a season-best and first-place finish in the 1,000 free (9:13.31). Noah Pereles—who won two events today—followed up with a career-best 1:39.80 finish to win the 200 free. Senior Eric Dietrich-Peterson marked his final meet at Sheerr Pool with a second-place finish and career-best time of 1:40.57 in the 200 free.

Boris Yang, who will vie for an Ivy League Championship in the breaststroke events later this month, closed out his regular season with a statement win in the 100 breast, setting a Sheerr Pool record after clocking in at 54.52.

A team captain and leader for the Quakers throughout the season, Sean Lee closed out his regular season in a big way ahead of the Ivy League Championships. Lee sprinted to a career-best time of 20.09 in the 50 free. Lee also posted the fastest time in the 100 fly in today’s meet (48.23), but he was scratched prior to the race.

Penn’s small senior class of four made sure to show out in its final meet at Sheerr Pool. John-Michael Diveris, who has perhaps been Penn’s best diver over the last four years, closed out a dominating regular season with the top score in both the 1-meter dive and 3-meter dive. His score in the 1-meter (303.75) was the second-best in his career while his victory in the 3-meter (325.06) was the fifth time he’s won the event this year.

The Golden Rams are back in the pool on February 14 at Daskalakis Athletic Center to take part in the Drexel Winter Invitational.

Senior Mikaela Lantz (Reading, Pa./Reading) hit an NCAA ‘B’ cut time in winning the 50-yard freestyle with a time of 23.93 seconds.

To round out the day, Georgia Wright (Doncaster, England) took first in the 400 individual medley with an NCAA ‘B’ cut time of 4:31.46.

The Golden Rams are back in the pool on February 14 at Daskalakis Athletic Center to take part in the Drexel Winter Invitational.