Penn Closes Out Dual Season with Sweep of West Chester 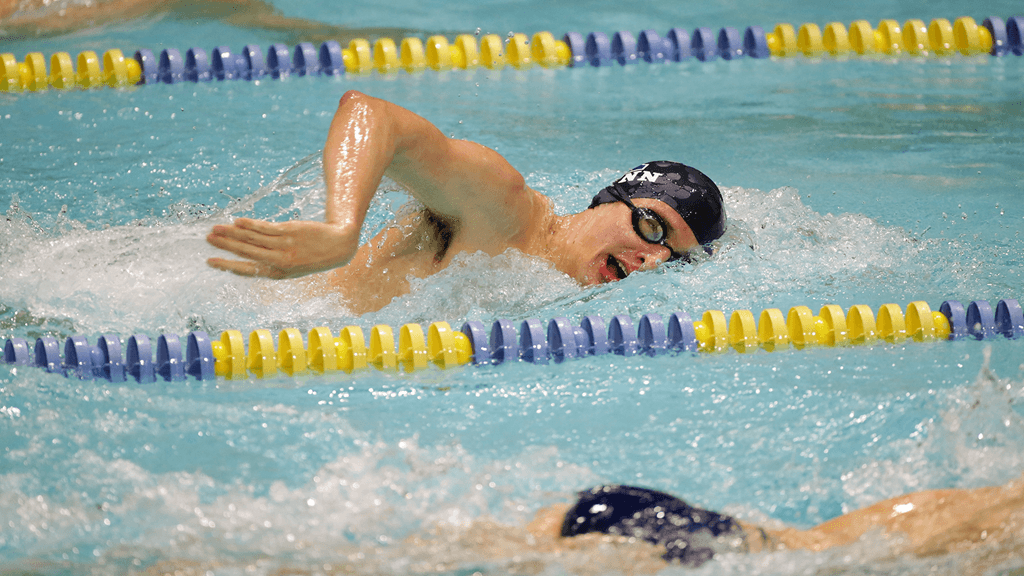 The University of Pennsylvania swimming and diving program completed a sweep over West Chester on Saturday to close out the 2018-19 dual meet season. Current photo via Penn Athletics

PHILADELPHIA – The University of Pennsylvania swimming and diving program completed a sweep over West Chester on Saturday to close out the 2018-19 dual meet season.

The men’s team got off to a quick start, winning the first 12 events to cruise to a 196-100 victory. The women showed off their young depth, with six athletes winning eight events to earn a 173-126 victory.

PENN MEN
NEWS AND NOTES
*The Quakers won 14 of 16 events for the second time this season.

*Eight different student athletes tallied an individual win on the day for Penn.

*Mark Andrew‘s victory in the 100 back (51.92) was the fifth different individual event Andrew has won this season.

*Sophomore Kenan Dols earned his first individual victory of the season, taking first in the 200 fly (1:54.82)

HOW IT HAPPENED
Penn got off to a hot start and never looked back, as the Quakers won the first 12 events to cruse to their eighth victory of the season, taking down the Golden Rams of West Chester.

The Red and Blue continued to dominate the medley relay events, as a team of Andrew, Colin McHugh, Sean Lee, and Nathaniel Cunnan started off the meet with a win in the 200 medley relay (1:32.36). Will Thomas followed up the event with another victory in the 1,000 free (9:33.56).

Andrew Bologna kept Penn’s streak going as he took first in the 1-meter (294.54) in his final dual-meet with the Red and Blue.

Following West Chester victory in the 100 fly, freshman James Hopper capped off a sweep of the diving events with a first-place finish in the 3-meter (305.55).

*Juliette Pozzuoli swept the 1-meter and 3-meter diving events, the first Penn diver to win both events in a single meet this season.

Juliette Pozzuoli became the first Penn diver this season to win both the 1-meter and 3-meter events in the same meet. She posted a final score of 264.45 to win the 3-meter before a 211.05 earned her another victory in the 1-meter. Freshman Caroline Dobbs took second in the 3-meter (203.63).

WEST CHESTER, Pa. – The West Chester University men’s swimming and diving team was back in action for the first time in well over a month on Saturday afternoon as the Penn Quakers paid the Golden Rams a visit for the Golden Rams final dual meet of the season. Penn captured the victory winning 196-100 over West Chester.

In the 100 backstroke, Kohle Kerchner (Reading, Pa./Muhlenberg) was the Golden Rams top finisher as he finished in third to lead the Golden Ram contingent in this event as well.

Jarod Anderson (Newville, Pa./Big Spring) earned a top-five finish of his own as he finished in third in the 100-yard breaststroke.

Powell registered another top-five finish in the 100-free, as he finished third in this event as well with a time of 48.00 seconds.

In the 200-yard backstroke, Kercher led the way once again for the Golden Rams as he finished in third with a time of 2:00.51.

Collin Petit (Havertown, Pa./Haverford) was the Golden Rams top-finisher in the 500-free as he finished in second with a time of 4:50.43. Mackevicius was not far behind as he finished in third just two seconds behind his teammate.

In the 100-yard butterfly, Barreto was a winner for the Golden Rams as he clocked a time of 50.55 to give the Golden Rams men’s swimmers their first victory of the afternoon.

North also captured a second-place finish in the 200-yard Individual Medley (IM) with a time of 1:57.36.

The combination of Barreto, Petit, Kerchner, and Mackevicius also proved to be effective during the 200-yard freestyle relay as the Golden Rams captured a victory in this event as well with a time of 1:26.52.

Jonas Ricci (Palmyra, Pa./Palmyra Area) also captured a top-five finish for the Golden Rams as he finished in fifth off the 1m board with a score of 239.78.

The West Chester women were back in action on Saturday afternoon for the first time in nearly a month when the Penn visited Graham Natatorium. Penn captured the victory winning by a final score of 173-126.

West Chester started off its afternoon with a victory as the Golden Rams captured first place in the 200-yard medley relay with a time of one minute and 46.66 seconds, which was almost three full seconds ahead of the second-place finishing team from Penn.

Georgia Wright (Doncaster, U.K.) followed this up with a victory of her own in the 1000-yard freestyle as she registered a time of 10:20.81, which was five seconds faster than the second-place finisher.

Katelyn Chick (West Chester, Pa./Villa Maria Academy) was the first Golden Ram to touch the wall in the 100-yard breaststroke, as she registered a time of 1:07.34 while teammate Madison Grenoble (Downingtown, Pa./Downingtown STEM Academy) was not far behind in third with a time of 1:07.88.

In the 50-free, Mikaela Lantz (Reading, Pa./Reading) was the first swimmer to touch the wall with a time of 24.28 seconds while teammate Sydney Wareham (Mount Joy, Pa./Donegal) was second with a time of 24.53.

Wright picked up another top-five finish in the 500-yard free, as she finished in third with a time of 5:11.27 to lead the Golden Rams in this event as well.

Carozza picked up another victory as she registered a time of 56.08 to capture the 100-yard butterfly.

McCarthy picked up another win of her own moments later as she captured the 200-yard Individual Medley (IM) in addition to her victories from earlier in the afternoon.

The final victory of the day for West Chester came in the 200-yard freestyle relay as West Chester registered a time of 1:36.47 to lead the field in this event as well.

Shannon McCabe (Carlisle, Pa./Big Spring) and Grace Harvey (Norristown, Pa./Norristown) earned top-five finishes off the 3m board in diving as McCabe was third while Harvey was fourth in this event. McCabe and Harvey also captured second and third place, respectively off of the 1m board.

West Chester is slated to be back in the pool on February 9th at the Pre-Championship meet.