Pelton Returns to Racing, But Li Queen of the Pool Again 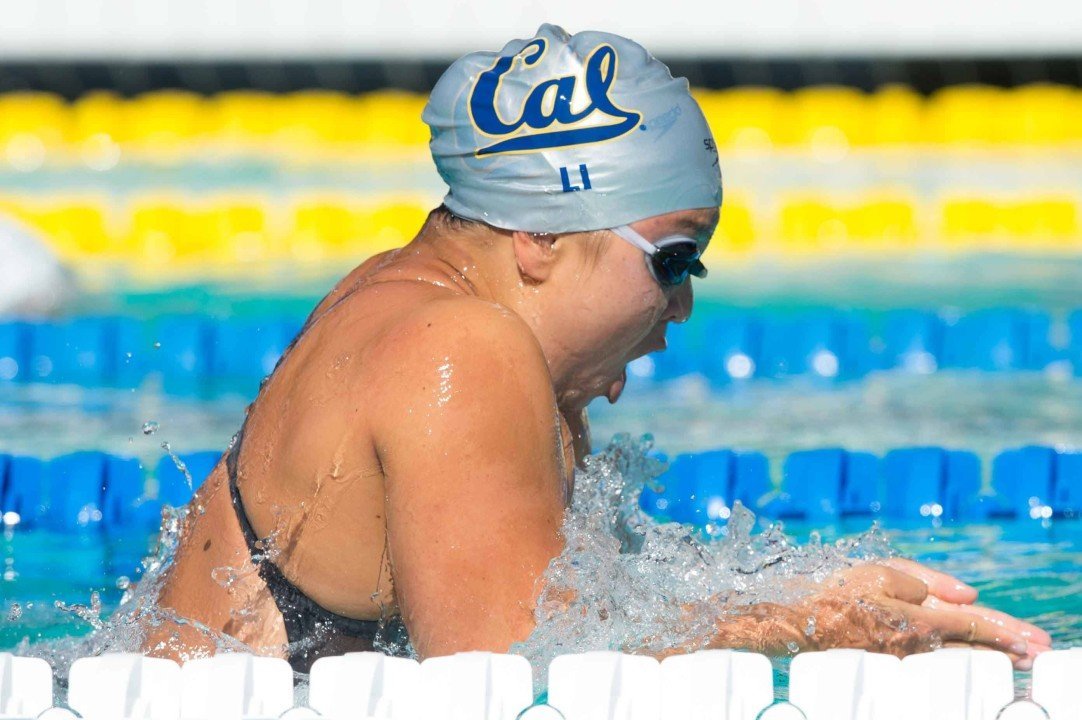 The reign continues for Cal junior Celina Li, who won her third-straight Queen of the Pool title on Friday at Cal Poly. Archive photo via Mike Lewis/Ola Vista Photography

For the 3rd-straight season, Cal’s Celina Li has been crowned “Queen of the Pool” in San Luis Obispo, as the defending NCAA Champion Cal women opened up their season with their annual pentathlon event against Cal Poly.

This meet, which always includes good spirits but this year didn’t include the men’s team as it normally does, had each competitor race a 100 fly, 100 back, 100 breast, 100 free, and 100 IM (all in yards). The times from the 5 races were all combined into a final total time, with the lowest total being declared the winner.

Li, a junior, is now three-for-three in this meet format that really advantages an IM’er such as herself. She won just one event on the day: the closing 100 IM, where her 57.12 was just ahead of senior teammate Kelly Naze (57.31), who took 2nd overall.

In total, the times for this year’s event were much slower than they’ve been historically. Li won with a combined 4:47.80 – off of the 4:42.90 she used to win as a sophomore and the 4:43.10 that won the event as a freshman. In general, most of the year-over-year times were a bit slower.

What was most exciting for Cal fans, though, was not who won the event, nor even the times of those winners, so much as it was who was present at the meet.

Among those swimming were senior Liz Pelton, the runner-up at last year’s NCAA Championships in the 200 IM. She placed 3rd overall in the total timing and appeared to be in good form after undergoing surgery for a broken hand this summer.

“Elizabeth is back and working with our trainer to get strength back in her hand,” a spokesperson for the team told SwimSwam. “We expect her to be at full strength for the season.”

More good news for Cal fans is the presence of three out of the program’s top four recruits: Amy Bilquist and Katie McLaughlin. Both swimmers have a chance at qualifying for next summer’s Olympic Team, and therefore had to decide whether to take on the rigors of the NCAA season first or to take a waiver in the Olympic year for preparation. Unlike their classmate Abbey Weitzeil, neither had declared their intent publicly, but with this swim are now counted-in for the NCAA season.

The swimmer bucking the trend for “slower than last year” at this meet was actually Cal Poly’s top finisher – senior Taylor Guy. She placed 13th overall in a combined 5:04.68, which comes out to 5 seconds better than she was in this meet last season.

Guy, who is primarily a butterflier at her best, made improvements in all five swims and showed a renewed level of overall fitness.

The Cal women will get the more traditional portion of their schedule underway in two weeks with a two-day dual meet against Washington State in Pullman; Cal Poly is hosting a two-day “swimming invitational” on Saturday and Sunday of this same weekend.

I’d say Abbey Weitzeil is more confident in her decision than ever. Heard she posted a 48.2 in an inter squad practice meet yesterday

Wow, some impressive early season times from the Cal women. Quite a few 51s in the freestyle or 55s in back/fly.

Typo above – it says the link says Amy Bilquist, when it should say Abbey Weitzeil.

I’m sad to hear the guys skipped it this year. This would have been Seliskar’s jam. He probably could have won it by 3-5+ seconds.

Those are last year’s meet results. Is Baker sick or injured? Only swam two events yesterday.