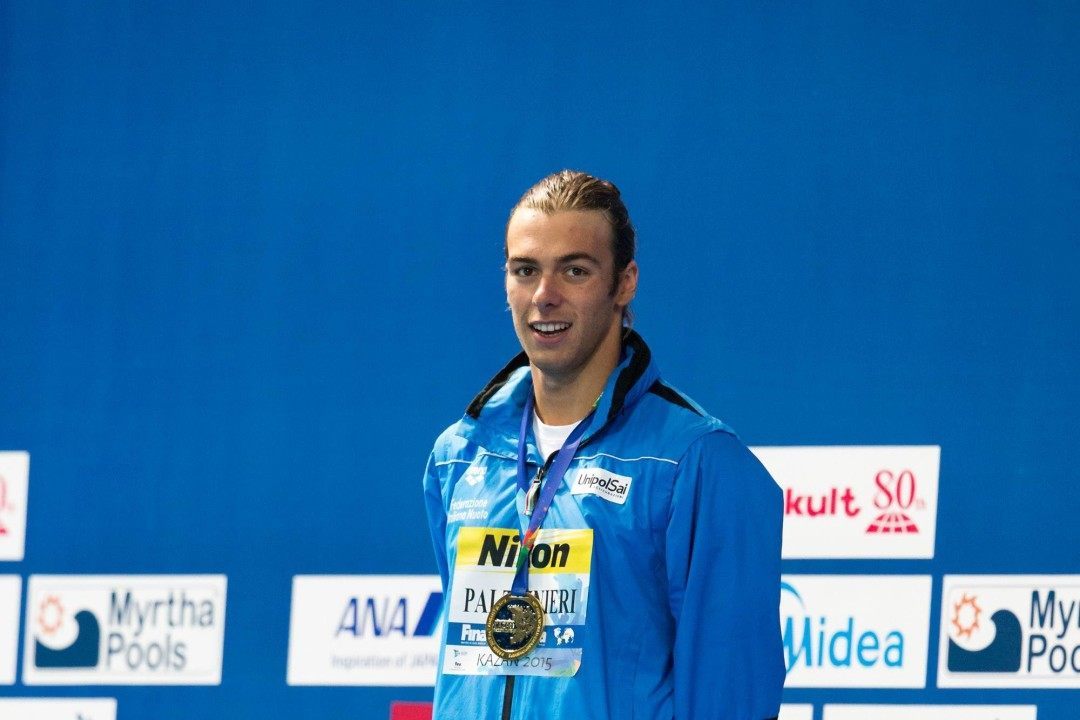 Paltrinieri added some local hardware to his collection, taking 3 wins at the Coppa Caduti di Brema this past Sunday. Archive photo via Tim Binning/TheSwimPictures.com

Straight off his magnetic performance at the 2015 Duel in the Pool, where he went head-to-head with America’s Connor Jaeger, Italian World Record holder, Gregorio Paltrinieri did some damage on his home turf this past weekend.

While competing at the Coppa Caduti di Brema (Bremen Cup), a regional, team-based championship, which took place on December 20th, the 21-year-old athlete took on 4 individual events on the day. The recent recipient of SwimSwam’s 2015 Swammy for European Male Swimmer of the Year raced the 400m freestyle, 400m IM, 200m freestyle and 1500m freestyle events, all taking place in the short course meters format.

In terms of results, Paltrinieri kicked off the meet with a time of 3:43.66 in the 400 free, about a second off of his time of 3:42.47 at the Duel in Indy. The outing was swift enough to give Paltrinieri the win in Brema and now sits has his 2nd best time ever in the short course version of the event.

Taking on the men’s 400m IM in Brema, Paltrinieri scored a mark of 4:15.67 to rack up his 2nd win at the meet. Though well outside the world’s top tier, for the freestyle specialist Paltrinieri, his time now stands as his career-best, shaving over a second off of his previous personal best of 4:17.32 logged in Riccione all the way back in 2011. The fastest he has been in the event most recently was the 4:18.84 Paltrinieri registered in 2013.

Paltrinieri took a back seat to the shorter freestyle stand-outs in the men’s 200m freestyle, earning a time of 1:50.10 for 6th place. Sandwiched after the 400m IM and before the 1500m free, the 200m very well may have been a transition-type swim to get Paltrinieri geared up for his main event.

In his signature 1500m race, Paltrinieri indeed took the top prize, but in a time positioned on more the pedestrian end of the stealthy racer’s speed spectrum. Paltrinieri won the 1500m free event in Brema in a time of 14:32.54, a time well behind his 14:08.06 World Record in the event from the 2015 European Short Course Championships in Netanya, Israel. The mark also sits over 10 seconds behind his outing against now-American Record Holder in the event, Connor Jaeger, where Paltrinieri earned the silver in a time of 14:20.24.

But, with a heavy season of racing and training under his belt, Paltrinieri can be pleased with his time in Brema, a mark which still sits among the Italian’s 10 best swims of his career.