500 freestyle The Pac-10 is one of the deepest conferences in the country in this event, despite being on relatively... 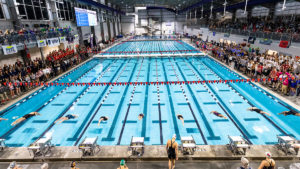 The Pac-10 is one of the deepest conferences in the country in this event, despite being on relatively the small side as far as major conferences go. Between the two finals, they put up 8 finalists under the 4:20 mark, including a 4:19.76 from B-final champion Jeremy Bagshaw from Cal, who is just a freshman.

But the winner of this event, USC’s Clement Lefert, won the race with his consistency. He started off strong throught the first 150 yards, to take a small lead, and then set turned on his cruise control. The rest of his 50 splits all fell between 25.7 and 26.0: a consistency that wasn’t even close to being matched by his top competitors. The runner-up was Stanford’s Bobby Bollier in 4:16.72, followed by a surprise third-place finish from his teammate Morgan Priestly (who also swam very well on day 1’s 800 free relay in 1:34.0). He touched the wall in 4:17.76.

Arizona’s Matt Barber has an impressive future in this event. As a freshman, he finished fourth in 4:18.10. This is the third-fastest freshman time in the country this season, with a mark only slightly behind only the highly-touted Jameson Hill from Georgia and Sean Ryan from Michigan. Stanford’s La Tourette, who is the conference (if not National) favorite in the longer distance, only swam a 4:19.02 here. While this isn’t a bad time for him, it might put a few flies in the honey of anyone hoping for a 14:30-low in that event.

In addition to Bagshaw’s 9th place finish, Cal also got an impressive 6th from Isaac Howell in 4:19.13 (his best time of the season by 17 seconds). though the bears fell into third place after this race (just behind USC, about 40 behind Stanford), they had to be happy with their results here. In an event that Stanford should have dominated them in, Cal was able to at least maintain contact.

Austin Staab is one of the best 100-yard butterfliers in the country. Heck, when he’s done, he’ll probably be discussed amongst the best 100-yard butterfliers in history. But beyond that, it’s been a mystery this season as to what his second and third events will be. Some have speculated that the 50-free would get in there, because prior to his leave, he was a pretty decent sprinter. I had a feeling, however, that he would give his hand a try at the 200 IM, after putting up a few decent mid-season times this season.

Discussion over. Staab will swim the 200 IM at NCAA’s. He took the Pac-10 title (and conference record) in 1:42.01. This is the fastest time in the country by a second-and-a-half. He was awesome in this race. He was obviously the fastest on the fly leg (21.50!), he beat Cory Chitwood on the backstroke, he beat Martin Liivamagi on the breaststroke, and he shut it down and cruised home on the freestyle leg. Through the first three legs, he beat almost every swimmer in the Pac-10 in their best stroke. If he can do that at NCAA’s, I don’t know who can catch him.

Chitwood, who previously had the best time in the country, was off that mark a little in a fourth-place finish. This is not too surprising, though, given what we know about the men’s and women’s programs at Arizona, historically: they come to Pac-10’s with the goals of racing and making sure they qualify, and nothing more. In between those two were a pair of Cal Golden Bears: Liivamagi (1:43.88) and freshman Marcin Tarczynski (1:44.47). This was an especially important swim for Tarczynski, because as we pointed out in the preview, he’s probably the only freshman in this meet who can have a game-changing difference on the scoring.

Cal pulled firmly into second-place after this race, but still lost ground to Stanford thanks to the Cardinal’s depth.

Nathan Adrian won this race in a 19.00, let’s get that out of the way right now. While he didn’t scare any of his conference records in this race, he should scare the rest of the country. This is the third time this season that he’s been under his 19.02 from NCAA’s last season, and so he’s obviously not rested for this meet. Adrian himself, though, did get a bit of a scare in this race from Vlad Morozov. There’s been question as to whether he could hang with Adrian, especially in this 50, and he certainly did that here. The USC freshman touched second in 19.06, just a fingernail back of the winner. This will make him the 4th seed headed into NCAA’s.

Stanford earned themselves three A-finalists, with 3rd-place going to Aaron Wayne (19.51), Alex Coville in 5th (19.66) and Jake Allen in 6th (19.70). Cal’s Josh Daniels has been in a bit of a slump this season, but finally broke through that in the evening session to take the B-final in 19.76. Cal needs him to repeat his huge taper from last season, where he split as fast as an 18.6 at NCAA’s, given that he’s an extremely important part of their relays. I’m confident that he can do that, and more, because he was still faster here than he was at Pac-10’s last year.

Cal was able to hold stead with Stanford here, in a race that was expected to be that way.

Based on what happened in the 50 free, it seemed as though Stanford’s depth (along with adding an on-fire Austin Staab to the mix) would carry them to a victory in the sprint relay. However, when Cal has the best sprinter in the country (at any level) leading off their relay, and the very Staab-like Tom Shields to anchor, it turns out it’s going to be very hard for anybody to beat them in this race. The splits weren’t recorded for Cal in this one, so we don’t know exactly how fast everyone was, but their 1:16.62 puts them just a hair behind Auburn. Coach Dave Durden has a lot of options (and difficult choices) to make for this relay at NCAA’s. On day 1, Cal time-trialed this race with freshman Shayne Fleming instead of Shields on the anchor, and were even faster (1:16.3). Their huge depth is going to save them a lot of relay swims at NCAA’s.

Stanford was just outtouched, and finished second in 1:16.86. They got a fantastic second-leg of 18.86 from Austin Staab. USC DQ’ed this relay that they would have been third in, but didn’t have any fabulous splits either. They would’ve finished in about a 1:18.0, which isn’t their best time of the season. This helped Arizona make up some ground in the fight for third-place with their bronze-medal time of 1:18.17, including a 19.2 surprise anchor from Freshman Tommy Gutman.

Mostly on the strength of the 500 free, Stanford dominated the swimming scoring on Day 2. They also pick up about 20 points given that the first round of diving (the 1-meter) fell into today’s scoring totals, which gave the Cardinal another 20-point boost.

Day 3 should largely belong to Cal, though including diving, Stanford should still hold a slight lead before the final day of competition. Also, be on the lookout for the Staab-Shields showdown in the 100 fly. Both swimmers are swimming extremely well, and that race will be a huge momentum swinger for one team or the other.