Olympic Torch For Tokyo 2020 is Lit in Ancient Olympic, Greece 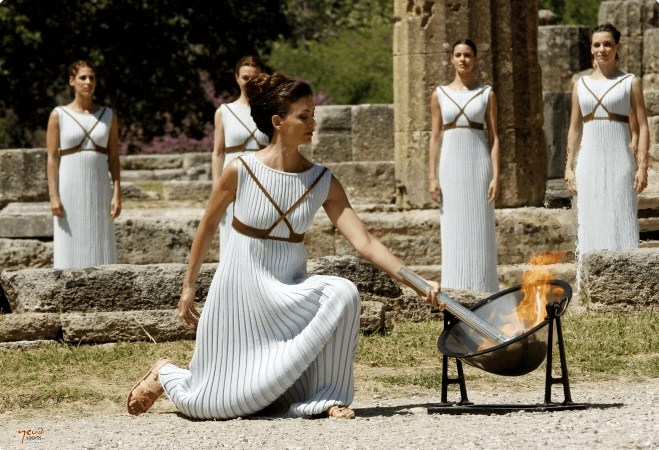 The Olympic torch was today lit in a ceremony which took place in Greece, marking the beginning of the final preparations ahead of the Tokyo 2020 Games Archive photo via HOC

The Olympic flame was today lit in a lighting ceremony which took place in Ancient Olympia, Greece. The torch will now begin the journey towards its destination, Tokyo, Japan, where the Games are set to begin in just 134 days.

Also present were Toshiaki Endo who is the acting President of the Tokyo 2020 Organising Committee and IOC Tokyo 2020 Coordination Commission Chair, John Coates.

The fate of the Games has been questioned in recent weeks due to the worldwide pandemic of the novel coronavirus. However, President Bach reiterated their [organisers] intentions to deliver the Games as planned, saying:

“This ceremony demonstrates once more our commitment to the success of the Olympic Games Tokyo 2020. We are strengthened in this commitment by the many authorities and sports organisations around the world which are taking so many significant measures to contain the spread of the coronavirus“.

He also thanked the Hellenic Olympic Committee and Greek Government for ensuring the lighting ceremony went ahead as planned, adding that the “health and safety of the torchbearers, spectators and staff will be the first priority along the route”.

The gold medal winning shooter from Rio 2016 🥇 will receive the @OlympicFlame and an olive branch. 🕊️#UnitedByEmotion #Tokyo2020 pic.twitter.com/VlqpGauRjq

The first torchbearer was Greek shooter and Rio 2016 Gold medalist Anna Korakaki, who made history  by becoming the first female athlete to ever do so.

A week long tour of Greece is up first with the torch travelling to Japan on March 26th. It will then travel the country for a period of 121 days before arriving in Tokyo for the opening ceremony on July 24th.

Oh dear ..Ij guess the crowds will have thinned out by the time it gets to the Italian.border.

Corona gonna blow that flame out