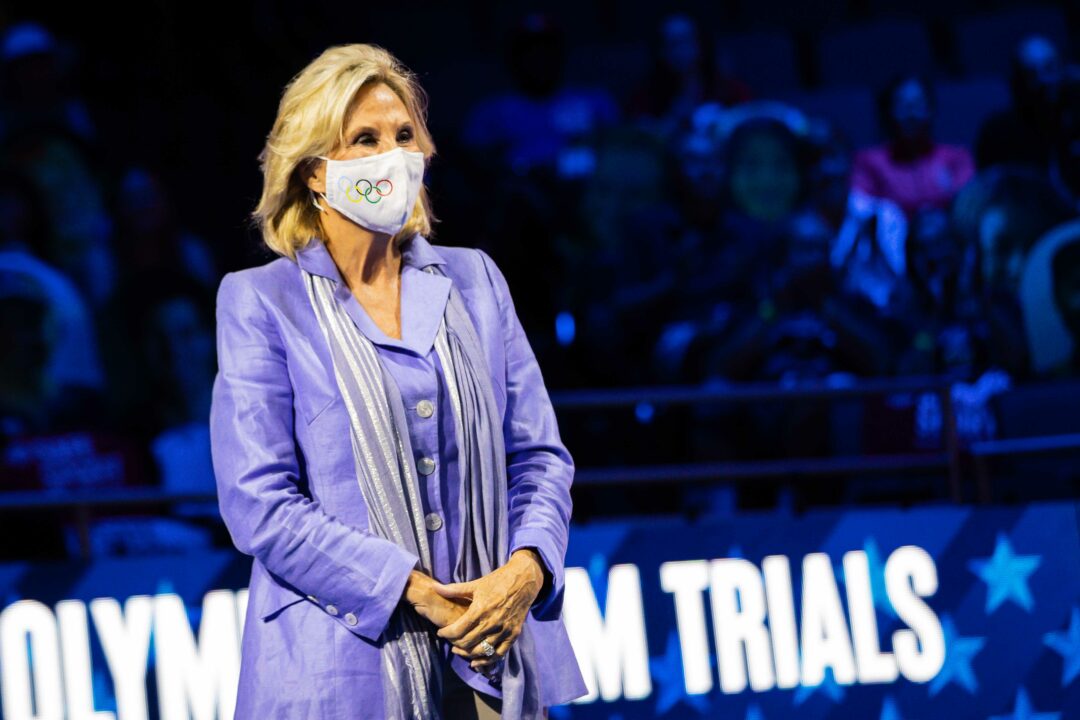 The show is set as a roundtable discussion, featuring comedian Bill Maher, along with several other guests each week. Throughout the show, Maher debates contemporary topics with his guests.

On the show, De Varona will be discussing her work as an activist for women’s sports, specifically through her Women’s Sports Policy Working Group. The group, which includes several other prominent athletes, is currently at the forefront of the battle surrounding transgender athletes in competing in women’s sports, as formed in response to President Joe Biden’s executive order that mandates blanket inclusion for all transgender female athletes.

De Varona represented the United States at both the 1960 and 1964 Olympic Games, winning two gold medals in 1964 in the women’s 400 IM and 4×100 freestyle relay. With her gold in the 400 IM, De Varona became the first Olympic Champion in the event, also setting the Olympic Record in the process.

After her retirement, De Varona joined the broadcasting world appearing on ABC’s Wide World of Sports and earning an Emmy for her work on the show. De Varona also took her influence to the political world, working for the Senate on several occasions, becoming a well-known activist for females in sports and for Title IV.

That very well may be the worst show in the entire world.

We agree on something!

nevertheless, awesome that swimming is getting airtime, we’ll take it

From one interview I watched with her she seems like she might be a bit more…reasonable…about things than some of the other anti-trans athlete zealots I’ve seen, but I’m not expecting great things from the segment as a whole.

It’s a tough convo. On one hand you have females being disqualified for their testosterone levels, so how does that translate to trans? I don’t think anyone cares about female transitioning to males and what advantage/disadvantage they would have, but since everything points back to the science, it supports there’s an advantage the other way around (male to female).

I don’t think you do anything about it in anything below the professional level. (I think NCAA has some rules on testosterone blocking, seems like it’s working fine.) But any sort of meddling in high school athletes or below does much more harm than good. That said, even the regulations the IAAF has come out with have been pretty bad, so who knows.

And hell even the NZ weightlifter everyone lost their minds about at the Olympics? Didn’t even hit her opening lift.

Sorry but I don’t want to see a rigged competition.
The podium of the women’s 800 meters in 2016 was ridiculous.
Allowing hyperandrogenic female athletes in sprint this year was a mistake. Have you seen how the silver medalist in the 200 meters has finished? It was unreal. It was unfair.
There’s no good solution. But I want a fair competition and allowing hyperandrogenic female athletes and trans athletes to compete in women’s sports is unfair.

I do not think it is a coincidence all of the female athletes that need to be legislated out of competitions have been African.

Nah, the thing I like about Maher is even though he leans left….pretty far left, he can call out some of the absurd things. I rarely watch the show, but guy isn’t afraid to voice a contrary opinion.

I disagree, he is bad.

I also rarely ever watch the show, but my very Republican dad does. (He will not willingly watch John Oliver’s show, which I would greatly prefer he watched instead. [Not that John Oliver’s show is perfect, but it’s leagues better than Maher’s.] I assume there’s a reason for his viewing preferences and it’s not that Maher is “pretty far left.”)

Again, I don’t watch him other that see a sound bite here and there. Same with Oliver, politically driven shows are draining.

From the very little I’ve seen from him when I followed the primary of the anti-democratic party I can tell you that he’s not far-left! 😆
He’s just corporate or establishment like other TV hosts on corporate media. He does what the establishment tells him to do.