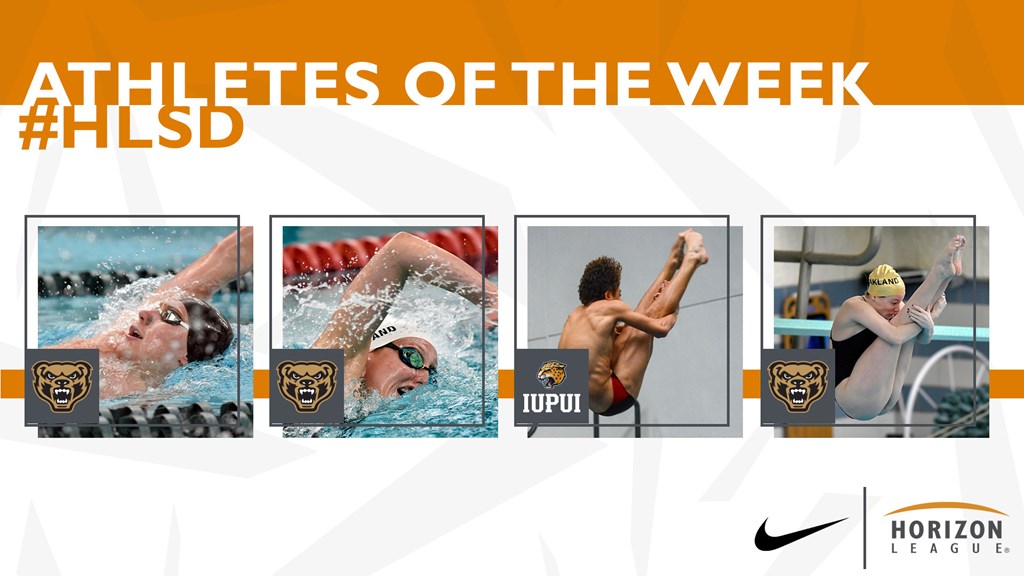 Oakland’s Marko Khotynetski and Susan LaGrand complete the sweep and pick up the Horizon League Swimmer of the Week awards. Current photo via Horizon League

INDIANAPOLIS (January 18, 2023) –  Oakland’s Marko Khotynetski and Susan LaGrand complete the sweep and pick up the Nike® #HLSD Swimmer of the Week awards. Khotynetski earns his second weekly title as he tallied seven victories against Horizon League competition. LaGrand picked up eight individual victories for the Golden Grizzlies as she earns her third weekly award of the season. She also clocked in with the fastest mid-major 100 IM time in the country at 55.57. IUPUI’s Sebastian Otero and Oakland’s Ellie Chalifoux win the Nike® #HLSD Diver of the Week awards. Otero swept the Horizon League competition with victories in both the one and three meter dives with scores of 334.55 and 347.45 respectively. Meanwhile, Chalifoux was victorious in both events on the women’s side with a total score of 306.35.

MEN’S SWIMMER OF THE WEEK | MARKO KHOTYNETSKI | OAKLAND | SENIOR | KYIV, RUSSIA
Marko Khotynetskyi rolled out seven first-place wins over the weekend at Oakland’s home meet for his incredible performances. Some include the 100-yard backstroke (48.41), and 200-yard backstroke (1:48.82) all the way to the 200-yard IM (1:50.53) and importantly, swimming a leg in the 400-yard medley relay (3:11.32) to bring add another victory for the Golden Grizzlies.

WOMEN’S SWIMMER OF THE WEEK | SUSAN LAGRAND | OAKLAND UNIVERISTY | GRADUATE STUDENT | GRAND RAPIDS, MICH.
Susan LaGrand had an incredible weekend in the pool with eight collected wins in her individual events including her backstroke events, (100-yard backstroke, 55.04 and 200-yard backstroke, 2:01.44), as well as contributing to the team victories in the relay events. She set a personal best in the 100-yard breaststroke (1:02.45), additionally, she now holds the fastest mid-major time in the country for her performance in the 100-yard IM (55.57).

WOMEN’S DIVER OF THE WEEK | ELLIE CHALIFOUX | OAKLAND | JUNIOR | BEVERLY HILLS, MICH.
Ellie Chalifoux recorded a victorious weekend off the diving board with a final tally of her season-high 306.35 point total for the Golden Grizzlies in at their home meet against Youngstown State and IUPUI.