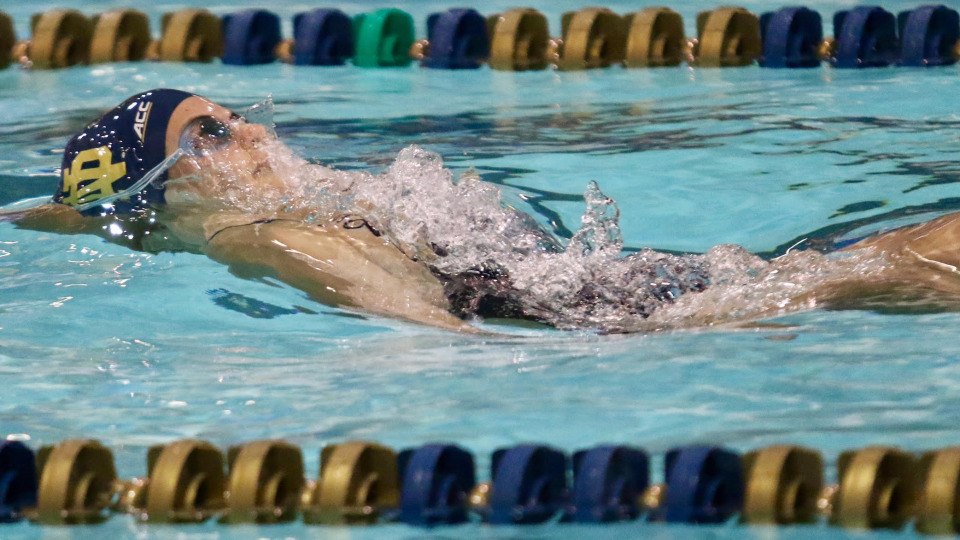 As part of the Invitational, the Irish will honor the anniversary of the 1992 bus accident that claimed two swimmers, and recognize legendary coach Tim Welsh Archive photo via Notre Dame Swim Camp

NOTRE DAME, Ind. — The Notre Dame Swim & Dive teams will host the Shamrock Invitational from Jan. 24-25. As part of the invitational, the Irish will honor the anniversary of the 1992 bus accident that claimed the lives of two Notre Dame swimmers, and recognize legendary coach Tim Welsh for his career accomplishments.

Teams from four other universities will travel to Rolfs Aquatic Center to compete in what is becoming one of the premier invitationals for the early spring season in collegiate swimming, according to Irish head coach Mike Litzinger.

“This invitational isn’t necessarily about winning and losing,” the Notre Dame coach explained. “For all of these teams, this is kind of a measuring stick on where you are pre-conference [championships]. So you’re going to see a lot of fast swimming and some really high-end diving, simply because of the nature of the group that’s together.

“They’re going to bring out the best in each other.”

“Traditionally, this meet has been kind of a dress rehearsal for the conference, since we are doing all the events in order,” Litzinger noted. “But, what you’re going to see is much, much more than that. It’s becoming one of the premier meets at this time of the year across the country because of the level of performance and what’s kind of at stake for each team.”

As the meet falls towards the culmination of the season, training for the Irish takes a different tone. According to Litzinger, the team now focuses on pace and race strategy, as opposed to the heavy conditioning and lifting components of training.

This weekend, the Notre Dame Swim & Dive Team will honor the anniversary of the 1992 bus crash that killed two members of the women’s team, Colleen Hipp and Meghan Beeler, and injured others.

“It’s always a time for us to reflect and how lucky we are to be on an athletics team at the University of Notre Dame and have each other; and, certainly, remember Colleen Hipp and Meghan Beeler, who we lost in that accident,” Litzinger shared.

“Alumni are really pleased that we’re continuing to do this and keep teams from the past in our life,” he continued. “I think that’s one of the great things about being at a place like Notre Dame, is your tradition follows you. And, no matter what that particular tradition was, it’s a championship-level tradition. We’re trying to regain that feeling here, and we want to make sure that we continue to honor those who came before us.”

The Irish will also honor Tim Welsh, who served as Notre Dame Head Swim & Dive Coach for 30 seasons, on Saturday. Honored as one of the most notable contributors to collegiate swimming, Welsh has been awarded the National Collegiate and Scholastic Swimming Trophy, the College Swimming Coaches Association of America’s highest honor, and this fall, received the 2019 Notre Dame Monogram Club’s Jesse Harper Award, recognizing him for his commitment and involvement with the athletic department and the university as a whole.

As such, Notre Dame will dedicate the Coach Tim Welsh Team Room, continuing to provide a space for student-athletes to, in the words of Welsh, “pursue – and achieve – athletic excellence, with self-discipline and love for one another.”